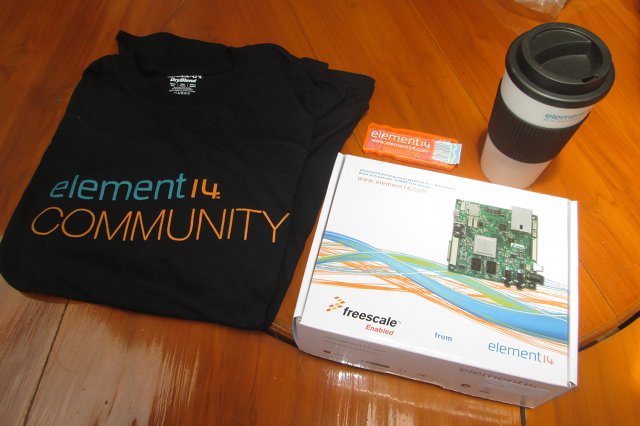 Freescale SABRE Lite is a development board powered by i.MX6 Quad processor with 1GB RAM, SATA, GbE Ethernet, and more. You can get SABRE Lite specifications in my first post about the board. I recently participated in Element14’s “brainteaser” competition for the 4th birthday of their community, where the company offered 9 SABRE Lite development kit to randomly selected participants, and I got lucky. The board can be purchased for $179 from Element14 (MCIMX6Q-SL). I’ll start by showing what in the package, followed by a side-by-side comparison with Wandboard Quad, and show how to getting started by following the Quick Start Guide provided with the board. SABRE Lite i.MX6 Development Kit Unboxing I received the board about 5 days after I provided my address in a large staple carton box with a few goodies. Beside SABRE Lite devkit, the package comes with Element14’s T-Shirt (not my size), double walled tumbler, and  plasters, probably in case I get hurt handling the […]

Syabas was a company designing set-top boxes such as Popcorn Hour Media Tank that were relatively popular before the Android media player invasion. The company is now called Cloud Media, and they offer a tiny media player called FreeOTT that connects to their Apps Market and bring online video, Internet radio, social media and other streaming media to your television. The device is free (as in free beer), as it’s not actually available for sale to the general public, and the only ways to get it is to have your ISP or telecom provider set it to you, or win one from the regular giveaways organized by the company. I won one via a giveaway announced on their Facebook page, and I had just to pay $5 (via Paypal) for shipping. The company does not provide detailed specifications for their device but we do know it’s a Linux based media player powered by an ARM11 processor, with 256MB RAM and […] 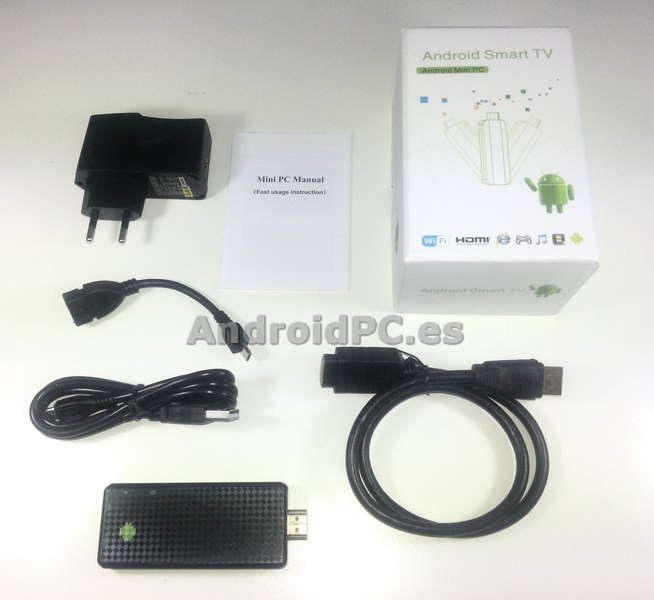 QC802 is one of the cheapest RK3188 mini PCs available on the market, as it sells for just $76 on Kimdecent aliexpress store ($73 after you get an Aliexpress coupon). AndroidPC.es got one sample, and posted a review in Spanish. I’ll post a summary in English of this review, but first let’s have quick look at the specs: SoC – Rockchip RK3188 quad core Cortex A9 @ 1.6 Ghz + Mali-400MP4 GPU System Memory – 2GB DDR3 Storage – 8 GB internal flash + micro SD slot (up to 32GB) Connectivity – Wi-Fi 802.11 b/g/n + Bluetooth 2.1 Video Output – HDMI (male) USB – 1x USB Host 2.0, 2x micro USB ports including one for power, one USB Host (or OTG?) So the specs are comparable to other devices. QC802 Unboxing Pictures The package contains the device itself, a 5V/2Apower supply, an HDMI cable, a micro USB to USB cable for power, a micro USB to USB adapter and […]

Kimdecent sells some cheap RK3188 mini PCs such as QC802 for $76, but instead of sending me yet another RK3188 device, they agreed to send CS868, an HDMI TV dongle powered by AllWinner A31 quad core processor, so that I could review it. This mini PC comes with 2GB RAM and 16GB Flash, the latter being larger than the 8GB flash found in most other devices, and is available for $95 on Kimdecent Aliexpress store. More details about the specifications are available on Unuiga U28 post since the hardware is the same. In theory, AllWinner A31 has a much slower CPU than Rockchip RK3188, but its PowerVR 544MP2 GPU should outperform the Mali-400 MP4 found it the Rockchip processor, and A31 supports 4K2K video decoding. In this post, I’ll show some unboxing picture, give my first impressions, test Wi-Fi performance, video playback capabilities, and run some benchmarks. CS868 Unboxing Pictures I received the device in a parcel with lot of […] 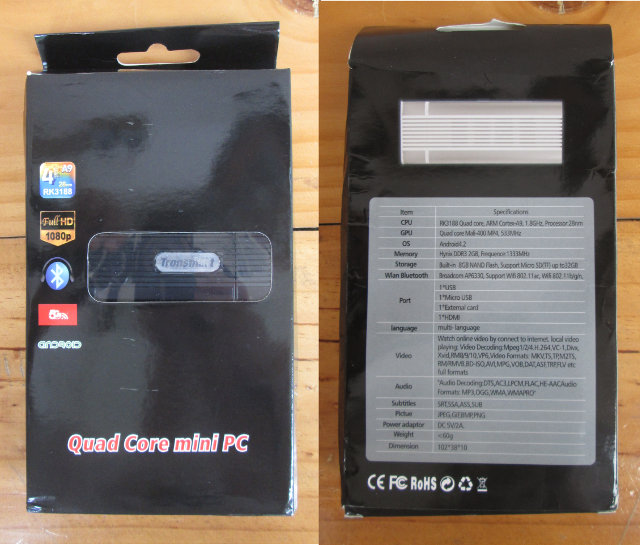 Geekbuying was kind enough to send me another RK3188 mini PCs for review. Tronsmart T428 is very similar to MK908 I reviewed earlier, with 2GB RAM and 8GB flash, but the latest device runs Android 4.2.2, its Wi-Fi module supports both 2.4GHz and 5GHz frequencies, and T428 can also be used as a Miracast Display. Geekbuying sells for the device for $96.99 including shipping, but before to buy the device I strongly recommend you read the review. I’ll post some unboxing pictures first, then carry on with my first impressions, video playback capabilities, Wi-Fi performance and some benchmarks. Tronsmart T428 Unboxing I received the device is in the package below. T428 comes with a short HDMI cable, a 5V/2A power supply, and a USB to microUSB cable for power. A close look at this mini PC shows the casing is made of plastic and metal (on the lengths), comes with an HDMI male port (my preference), a USB port, a […] 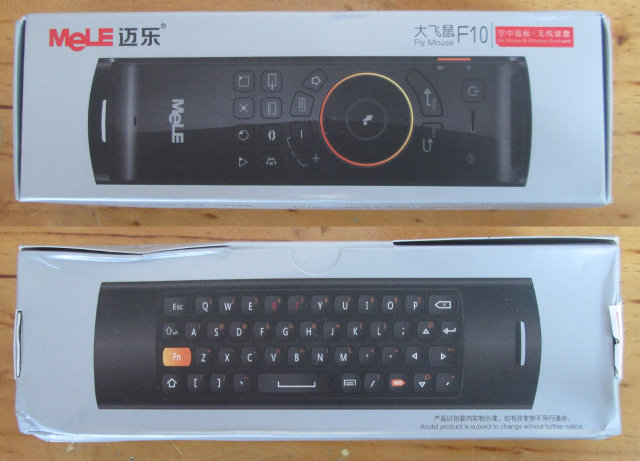 Up to now, I always connected USB keyboard and mouse to Android mini PCs I tested. It works but it’s not always fun to use. Mele F10 Fly mouse is a dual sided 2.4GHz remote control with one side being somewhat of a standard remote, while the other side is a QWERTY keyboard. A gyroscope is also integrated in to the remote, which allows it to be used as a “magic” remote and mouse the mouse pointer. I’ve bought one on DealExtreme for $25.20, and I’ll do a short review about the remote today, even though it’s not exactly a new device. Mele F10 Unboxing I’ve received the F10 in a slightly damaged package. This happens often as to save on costs packages are often sent in bubble mailers, but all items I’ve received have usually worked fine. The other sides of the package indicate Mele F10 can be used in Windows 98SE/Me/2000/XP/Vista/7, Mac OS, Android, and Linux operating system, […] 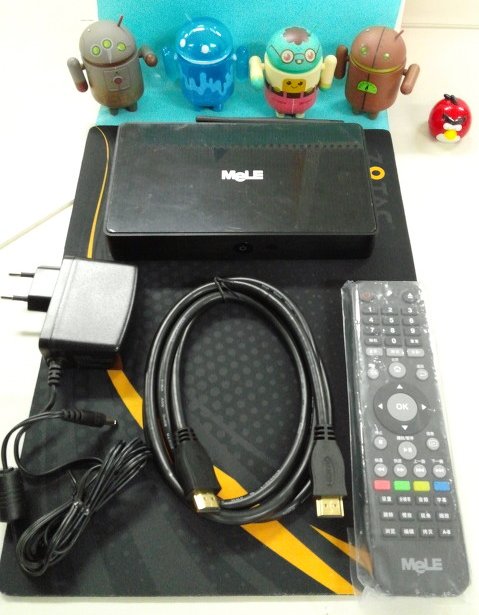 Mele A1000G Quad is an Android set-top box featuring AllWinner A31 quad core Cortex A7 processor with 2GB RAM and 8GB Flash. You can check the full specifications in my previous post. Eddy Lab got hold of an engineering sample with a similar model but without SATA that looks like A3700 [Update: Model name is apparently G39A04], and he, or they, took a few pictures, and tested the device (Link in Korean). I’ll re-post some of their unboxing pictures, and share some of their screenshots and benchmarks in this post. The device comes with a 5V/2.4A power adapter, an HDMI cable, and an IR remote. The device features an Audio out jack, a micro USB socket, a power jack, and HDMI connector, an RJ45 Ethernet connectors, 3x USB host ports, SPDIF output (Optical), and an SD card slot. It’s very similar to the original Mele A1000 except VGA and AV ports are missing, as Mele considers it is an high-end […] 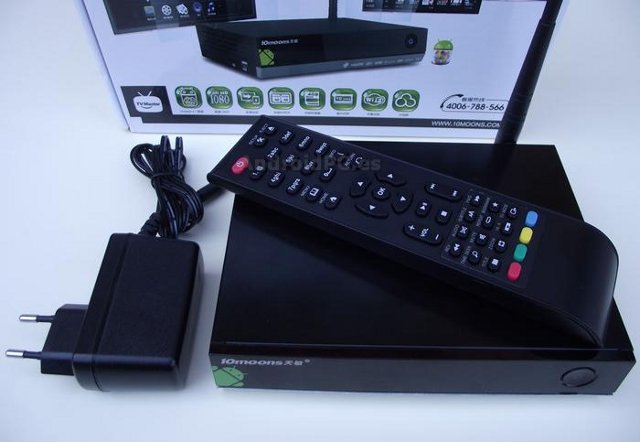 Bluetimes MX5 is an Android 4.2.2 set-top box powered by AMLogic AML8726-MX that costs around $70, or about $30 less than devices with similar hardware such as G-Box Midnight MX2 or Tronsmart Prometheus. AndroidPC.es got hold of one sample, also called 10moons D6, took some pictures and reviewed the devices for us. Bluetimes MX5 Unboxing The package contains the media player, an RF remote control and a power adapter, but no cables, which is one way to save on costs. Looking at the rear panel of the device front left to right, we can see an external Wi-Fi antenna, the 5V power jack, one USB port,  a composite RCA connector and stereo RCA output, an Ethernet RJ45 port, HDMI output, and SPDIF output. An SD card slot and another USB host port are located on the front panel. So Bluetimes MX5 just has 2 USB ports, which is a bit less than the 3 to 4 USB ports found on […]