Samsung has announced that it was merging Bada operating system with the new Tizen project (Linux OS with HTML5 API) at CES 2012.  The work has already started, but Samsung did not provide any estimated completion date. If you have been developing Bada applications, the good news is that Tizen will support mobile applications written with bada’s SDK (software development kit) and previously published bada apps will be backwards compatible. Bada and Tizen developers will be given the same software tools (SDKs and APIs) so that if you know how to program in Bada, you will also be able to make Tizen apps. Samsung expects Tizen will be used in entry-level smartphone powered by single core processors as well as other devices targeted by Tizen such as tablets, smart TVs, netbooks and In-vehicle infotainment (IVI) devices. One or two Tizen devices should be released in 2012, and the company said […] 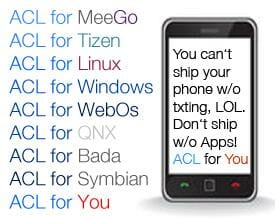 Tizen, a new Linux based HTML5 operating systems aimed at mobile and consumer devices, was announced at the end of September 2011 without much detail. Today, Tizen has posted a set of pre-release tools, source code and related documentation to give application developers an early look at Tizen. Tizen Alpha (pre-1.0) is a very early preview and is not yet designed for use to create production applications. They specifically released the following items: Tizen source code preview – Operating system source code, including middleware, basic UI, and menu interface Tizen SDK preview – SDK & APIs: Web IDE, Emulator, Web API documentation, and Toolchain If you plan to try Tizen SDK, you development machines should match or exceed the following requirements: Ubuntu 10.04/10.10/11.04 32-bit (Windows and Mac version will be available later) At least dual-core 2 GHz CPU (recommend VTx supported by CPU) At least 2 GB of RAM memory […]

Earlier this week, the Linux Foundation announced yet another new Linux-based open source operating system for mobile and consumer devices based on Web standards called Tizen. This project is backed by Intel and Samsung who have already been involved with Linux based operating systems before, respectively with MeeGo and Bada. Both companies will be part of the technical steering team. It looks like Tizen will replace Meego overtime. Meego developers blasted the move and posted  angry comments especially in relation to Qt support and the fact that all the previous work put into the project has probably gone to waste. My take is that using HTML5 is probably not such a bad ideas as many applications are currently developed in HTML5/Javascript for Chrome Webstore for example, and it could make porting those to Tizen straightforward. Tizen will support multiple device categories including: Smartphones Tablets Smart TVs Netbooks In-vehicle infotainment devices […]