There are already several expansion boards for the Raspberry Pi such as the Gertboard or RaspiComm, but none of them originated from China. Onebir spotted a new expansion board from a Chinese supplier on Aliexpress that’s available for $25 including shipping. There’s no description on the seller website, the seller provided us some details in Chinese. With Google translate help, the key features of the board(s) can be summarized as follows: 3.3V / 5V SPI interface 3.3V / 5V I2C interface Opto-isolator for GPIOs supporting 8-channel 50V/600mA to control motors, drive LEDs, etc… Power LED (The pictures are crap, but I can’t see any LEDs on the boards) External power fuse to protect the expansion board and the Raspberry Pi. The features in Chinese are shown below in case something was lost in translation: 1.全尺寸完美兼容树莓派， 2.将3.3V的SPI接口转换为通用的5V SPI接口（并且可以通过P13跳线切换回3.3V） 3.将3.3V的I2C接口转换为通用的5V I2C接口（并且可以通过P13跳线切换回3.3V） 4.GPIO放弃光耦隔离方式，采用芯片驱动，支持8路50V、600mA的高电压大电流驱动，意味着可以直接连接舵机，驱动LED等等（要做小车，机器人，智能家居，远程控制的必备哟） 芯片采用插座方式， 不小心烧坏以后方便更换 5.增加LED电源灯 6.外接电源使用保险丝，更好的保护你的扩展板和树莓派 I’m not even sure this “expansion […] 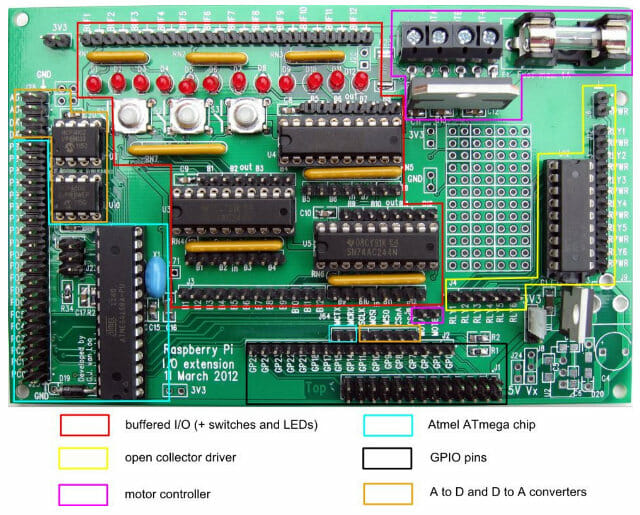 More expansion boards for the Raspeberry Pi are coming out. This time, the Raspberry Pi Foundation announced the “semi-official” Gertboard expansion board that has been designed by Gert van Loo, a member of the foundation, but is not an official Raspberry Pi Foundation product. This board expands the Raspberry Pi’s “GPIO” pins and allows you to interface with the outside world in several ways including: Drive motors to open doors, lift things, or power robotics Communicate with sensors such as temperature, gas, light.. sensors Switch devices on and off Control LEDs The boards is composed of the following key building blocks: 12x buffered I/O 3x push buttons 6x open collector drivers (50V, 0.5A) 48V, 4A motor controller 28-pin dual in line ATmega microcontroller 2-channel 8/10/12 bit Digital to Analogue converter 2-channel 10 bit Analogue to Digital converter The gertboard is sold unassembled with the bare PCB and all the components […]