Linaro 14.04 has been released with Linux Kernel 3.14 (baseline), Linux Kernel 3.10.37 (LSK), and Android 4.4.2. More work has been done on ARMv8 support, and big.LITTLE for both the Linux kernel and Android, as well as work on member hardware platforms such as Origen, Arndale, Arndale Octa, Broadcom Capri, and Hisilicon D01 boards. GCC 4.8-2014.04 Linaro is said to include performance improvements. Linaro Android engineering builds for Nexus 7 and Nexus 10 have been setup, but I can’t quite find the images. They’ve also added the BeagleBone Black to member builds. Here are the highlights of this release: Linaro Stable Kernel (LSK) 3.10.37-2014.04 Updates to Android support (from Google and Linaro) Added Big endian for ARMv7 and ARMv8 Thermal framework DT support Huge pages and transparent huge pages for ARMv8 Tagged pointers for ARMv8 Non-coherent DMA for ARMv8 Other Features big.LITTLE support – ARM MP patch set, IKS (ARMv7 […]

Linaro 13.04 has just been released. It features Linux Kernel 3.9-rc7 and Android 4.2.2. A lot of work has been done on ARMv8 (Cortex A53) with further work on OpenEmbedded, more testing, and updates to the GCC toolchain. Calxeda EnergyCore server has been added to LAVA, Origen Quad now gets hardware video acceleration in Android Jelly Bean. Still more cleanup has been done on the kernel side with regards to Samsung and ST SoC, and a big.LITTLE porting guide is now available (linaro login required). Here are the highlights of this release: LAVA Prototype of a new publishing system is used to overcome performance problems with android-build.linaro.org. Calxeda EnergyCore support is merged in LAVA, and an isolated system has been set up for web benchmarking. Fedora support is merged in LAVA. A user can submit LAVA jobs using a Fedora pre-built image. Boot commands are untangled from LAVA dispatcher. They’re now […]

Linaro 13.03 is now available, and features Linux Kernel 3.9-rc3 and Android 4.2.2. This month, Linaro has released their first Origen Quad Android image, as well as Tiny Android build for Arndale. The ALIP image listed in the download page is still based on Ubuntu 12.11, but as doc Bormental noticed earlier this month, the latest ALIP Quantal 13.03 image is available for download at https://releases.linaro.org/latest/ubuntu/quantal-images/alip. Some development tools (gcc, g++, vi, make..) are now included in Android, so you can develop and build natively from your Android device. Linaro has kept on cleaning the Linux kernel ARM tree for Exynos and ST Ericson SoCs. More work has been done on big.LITTLE for both IKS and HMP, as well as ARMv8 OpenEmbedded, and an initial GRUB port on ARM UEFI is now available. Here are the highlights of this release: Automation and Validation A simple CLI tool for communicating with […] 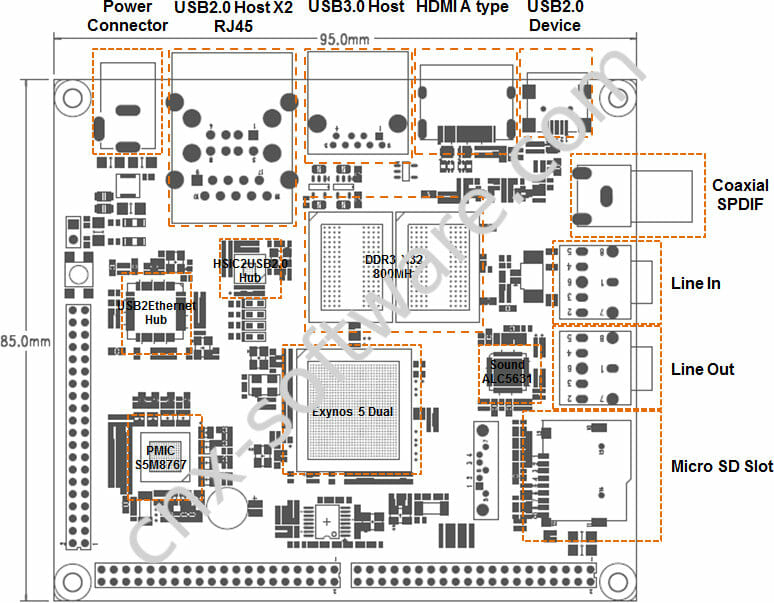 If you want to develop on a Cortex A15 processor, but Arndale development board is a bit expensive for you, don’t despair as ARMBRIX development board featuring Samsung Exynos 5 Dual processor is currently being developed and should be available in Q1 2013 for $135. The preliminary specifications include: SoC – Samsung Exynos 5 Dual Cortex A15 CPU + Mali T604 GPU System Memory – 2 GB DDR3 @ 800 MHz Storage – microSD slot Video Output – HDMI Audio In/Out – HDMI, SPDIF, Line In/Out. USB – 2x USB 2.0 Host, 1x USB 3.0 host and 1x USB 2.0 device Ethernet – Via USB to Ethernet hub. SATA – The connector is on the left of the micro SD slot. Expansions – 3 headers. Dimensions – 85 x 95 mm This board is based on Arndale design, and will be software compatible. Currently, Arndale officially support Android only, but […]

Linaro release 12.11 has just been announced, and includes Linux Kernel 3.7-rc2 and Android 4.2. The tracking version (stable release) uses Kernel 3.4.19. This release upgrade Android to version 4.2, adds support for Origen 4 Quad board, and you can now use perf profiling utility in Linaro Android. Initial GRUB support for ARM is now available, the Ubuntu Precise server image is back online and lots of updates have been done on the kernel, mainly for Android, device tree and big.LITTLE. Here are the highlights of the release: Android Platform Enablement Android upgraded from 4.1.2 to 4.2 to all the platforms Android builds are available for Origen 4412 board setup Improvements to click-through license infrastructure MP3 playback enabled for ARM Versatile Express and Samsung Origen (4210 and 4412) Fixed riff USB issue on newer laptops Testing/LAVA Re-enabled Android CTS testing Integrated the new Methanol browser test Upstreaming Perf patch was […]