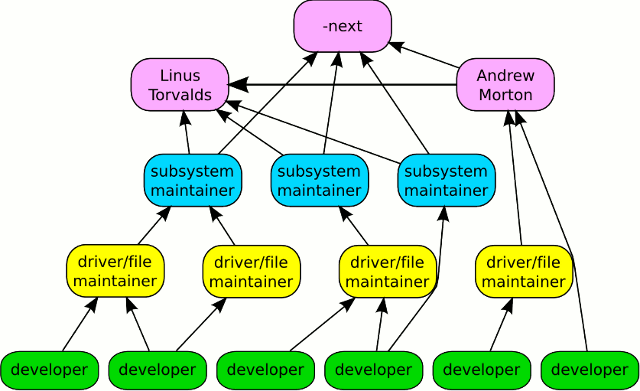 If you are a developer interested in getting your code into mainline, Greg KH keynote at Linaro Connect 2013 Hong Kong is probably worth a watch. In this presentation entitled “I Don’t Want Your Code! Linux Kernel Maintainers, why are they so grumpy?”, he first describes the large amount of patches they receive (7.28 patches per hour for kernel 3.8.0), gives some statistic about developers and companies involved with the kernel (about 20% is done by individuals), tells the audience they should submit the kernel code during SoC emulation/simulation stage, so that it’s accepted and ready to use when customers get the silicons (like Intel does), and quotes Intel and IBM executives saying “Working upstream saves time and money”. He then moves on what he does not want to see (and gets a lot): patch series with missing patches, email signature saying it’s confidential (since Linux development is done publicly, […]

Greg Kroah-Hartman has a very good tutorial about writing and submitting a patch to the Linux kernel. The video is over 1 year old but this is still relevant. The materials for this tutorial are available via git: git clone git://github.com/gregkh/kernel-tutorial.git Alternatively, you can also download a copy of the presentation slides. The actual presentation is divided into 6 parts: git basics (git branch, git clone…) Kernel coding style (Details can be found in Documentation/CodingStyle) Fixing a file (with scripts/checkpatch.pl scripts) Generating a patch (with git -diff) Email the patch (with scripts/get_maintainer.pl and git send-email) Q&A If you want to skip the git basics and kernel coding style parts (although I don’t recommend it), fast forward to 13:33. All patches by in the linux kernel are checked by at least 2 persons. Before submitting a patch, you’ll have to make sure of the following (Checklist): Kernel builds with patch applied […]