Right before CES 2011, Freescale announced i.MX6 series, its latest multi-core Cortex A9 processor aimed at smartphones, tablets, eReaders and other consumer electronics equipment. Here’s an excerpt of the press release:

Integrating one, two or four ARM® Cortex™-A9 cores running at up to 1.2 GHz each, the i.MX 6 series delivers up to five times the performance of Freescale’s current generation of applications processors. This performance provides additional headroom for unbounded user experiences in next-generation tablets, eReaders, smartphones, automotive infotainment systems and other exciting consumer and automotive products.

They will start delivery of samples end of 2011, so you can expect products to be delivered with this chip sometimes in 2012, a bit before products based on Cortex A15 / Mali T-604 are released. 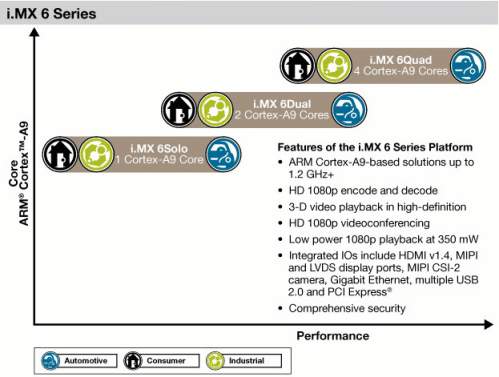 i.MX6 series are aimed at automotive, consumer and industrial applications and comes in 1, 2 and 4 cores namely:

We do not know much about the GPU, however you can notice that at 200 Million Triangles per second, the GPU is over twice as fast as NVidia Tegra 2 (90MT/s) and over 5 times faster than Mali 400 (30 Mt/s).  5 times is exactly the performance improvement announced earlier for Mali T-604… So i.MX6 Series might be one of the first to embed the new ARM GPU Mali T-604.

i.MX6 Series will apparently use i.MXS development kit that was also used for other i.MX series such as i.MX5 Series.