We’ve had the Internet for a few decades, and recently terms such as the Internet of Things, previously as (connected) embedded systems, and the Internet of Everything have started to become a common features of tech speak. But following research from Osaka University and the Tokyo University of Agriculture and Technology (TUAT), we may soon start to talk about the Internet of Insects. 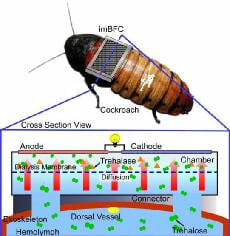 Japanese researchers have developed a fuel cell that can be mounted on an insect, and generate powered from sugar (trehalose) found in the insect’s body fluid (blood lymph). The fuel cell consists of electrodes, a tank of body fluid and a pipe to be inserted into the insect. Then some chemical “magic” occurs. There’s already a prototype, which has been unveiled at IEEE MEMS 2014, an academic conference that tool place on January 26-30, 2014, in San Francisco. The prototype has been 3D printed, measures about approximately 20 x 15mm, and has been found to generate up to 50.2μW of power when inserted in a cockroach.

The final goal, which may be many years away, is to combine the fuel cell with sensors and radio to create wireless sensor networks composed of cyborg insects – real insects that can be controlled -, in order to avoid the need to deploy many wireless sensor networks. A research paper published in 2011, and entitled “Self-circulation System of Insect Hemolymph for Insect-mountable Biofuel Cell” provides technical details.

(Got to wonder: what about just sticking in a few Zn & Cu metal electrodes… Works with potatoes 🙂

@Gabe
But Zn Cu electrodes can be stuck directly into cockroaches. (Perhaps? Ethics aside…)

Simple.. put a small potato on the back of the cockroach… Problem solved!

@Jean-Luc Aufranc (CNXSoft) Until it starts to rot & the other cockroaches eat the potato! 🙂

doesnt say how they are going to control the insect. will need more than just electric producing probes to do that.

@mary
The Matrix movie can provide some inspiration and ideas 🙂