FLIF, which stands for Free Lossless Image Format, is a new lossless image format that is said to provide better compression ration than PNG, lossless JPEG2000, lossless WebP, and lossless BPG for all king of images including medical images, geographical maps, cliparts and so on. 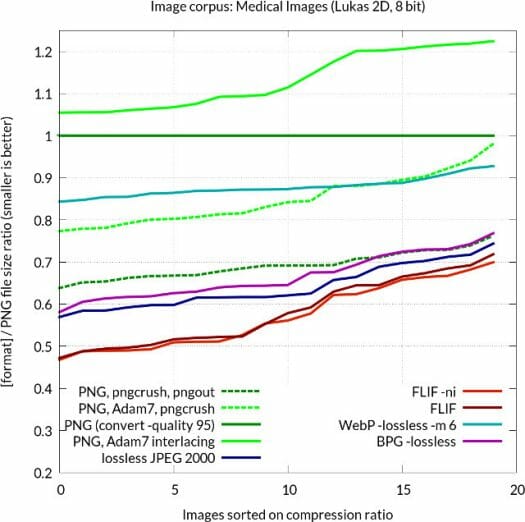 Beside being lossless, FLIF is also progressive, so a lower quality version of the image can be displayed early while the download is still in progress. The developer has uploaded a video comparing how a PNG image and FLIF image would load in a slow network.

FLIF is open source with the code available on github. However, the code is currently licensed under GPLv3+, which makes it impractical for implementation in other open source projects, like web browsers, or commercial applications. But the developer explained  that it is still work in progress, and once there is a library, it might be license under LGPLv3+, or other more permissive license.

There’s nothing about gpl3+ that prevents it being used in many other projects. It’s just specific projects that can’t. I mean come on. Plenty of projects are gpl3+ themselves and many more are gpl2+. It depends on what the authors wish for their product and universal browser adoption is an unlikely outcome given how poor PNG uptake was and still is; there are many other users of technology than technology than showing adverts. So giving away their work to advertising companies may not be high on their list of desirable outcomes and in that case GPL3 could be the perfect… Read more »

It would be better if consumer grade cameras would save images to something like this, but not in lossy jpg files.

@Arthur
Most likely JPEG would still be smaller, but I suppose they could always add an option for lossless photos. I’m just not sure the quality would be much better.