You’ve probably heard about Volkswagen emission scandal that surfaced last year. Basically, the company used some tricks to detect when the vehicle was under test and ran in low emission mode during those tests, and normally on the road emitting up to 40 times over the U.S. pollution limits. Cheating is quite easy because testing is performed indoor with the car wheels on rollers as shown in the picture below, so all the software had to do is detect whether the car was actually moving forward to select the right mode. 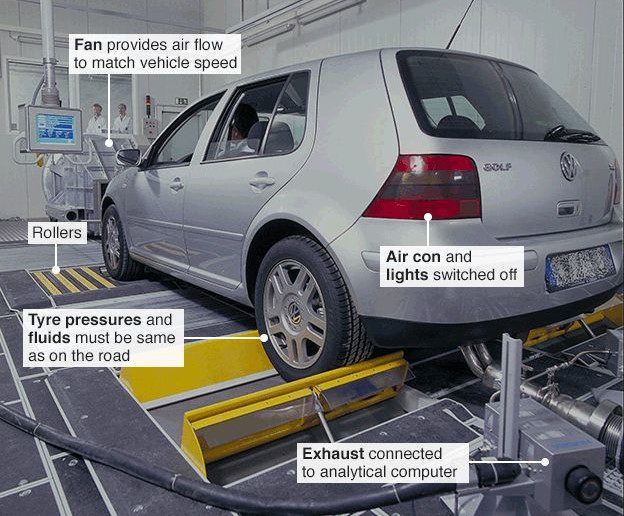 Several executives involved in the decision to rig the emissions tests got charged as expected, but what happened to the engineer who implemented the code following his  boss(es)’ request? Reuters reports that he’s been sentenced to 40-month prison term, and a $200,000 fine, after pleading guilty early on, and collaborating with authorities.

His lawyer argued that Jiang (Engineer surname) was no a “mastermind” of the emissions fraud, and “blindly executed a misguided loyalty to his employer” , but the prosecutor countered that he was a “pivotal figure” in designing the cheating system. Liang is now 63 years old working in another position for the company, and the system was used between 2006 to 2015, so even at the time, he was likely a senior engineer, and not a “rookie” engineer. None of the “news outlet” I’ve read bothered to post a link to the court decision for people wanting more details… But still, that ruling means you could be legally liable for the code you write, even if you did not take the decision yourself. The case is not complete, as an appeal is possible, but it looks like they are only attempting to reduce the sentence.

I believe there’s been a bit of confusion in this case in the mainstream news. The headlines say engineer, yet the text says executive. Did he actually write the code or simply order underlings to do it?

… you just keep on trying ’till you run out of cake …

Check your ageism son. I guarantee I know some old Engineers who would mop the floor with the likes of you. I’ve seen it many times, when the youngsters are completely buried those more experienced step in and sort everything out – they know, they’ve been there before.

That wasnt ageism, you simpleton, it was logic… at his age at that company he had to make higher place to be responsible of that development instead of coding alone in a cubicle…

@L.Peter
You might be right… 30 (or so) years of code development can’t beat 3-5 years of “development” using YouTube tutorials, StackOverflow questions or GitHub Pull / Copy&Paste.

And, for sure programming languages appear over night/monthly, they all differ in the way they work or are used and no one can keep up with them… unless he’s 25-30 or so!

Big companies have a fine grained release process. The actual coder does not even know where his code ends being used. Jiang was responsible for the tech in USA IIRC. He definitely did not write the code. The actual code is from the supplier Bosch who made the cheating functions for testing purposes. At least they say so.

BTW, discovering of the cheating functions was Sept. 2015. Not last year.

Slackstick :
Big companies have a fine grained release process. The actual coder does not even know where his code ends being used.

I think this depends on a company and a product: I know exactly where my code is running around the world 🙂

You mentioned he was held liable for his code. I doubt that he was convicted of crimes for that, but rather for other actions. The code was a side effect. It is clear that he did it at the behest of Volkswagen, and that removes the code liability from him. But other actions done such as falsifying or covering up actions is more likely what got him in trouble. This is also in line with obstruction of justice type sentences as well. No matter what you code when you are asked a straight question ever by the government, either get… Read more »

Liang is mentioned in section 16. Plead guilty in Sept 2016 of violation of the Clean Air Act. Which from other verbiage in the complaint sound like not the coding, but the action of defeating emissions certifications is the action he committed.

@jim st
I wished they made those searchable…

How do the publication of court cases work in the US? I can imagine many are kept private, but in the case of court cases of public interest they may be made public, maybe after an FOIA request? Or is there a public database somewhere instead?

How could Reuters / Bloomberg access those document, while we apparently can’t find them easily online?

Well yeah cheating is bad and they should be punished for that. Start with the one who gave the order and the company. As for the coder: if he woudn’t have done it they would have used another one. So he is responsable but in a way less way. As for the emissions…only 5% of the Emissions in a big city (like berlin) come from cars. But the whole europe is banning “stinky” cars from their main cities…whats the difference in air quality now: Well in Stuttgart (it was one of the first cities with this new law) the airquality… Read more »

Their is the consumer trust issue too. If they lie on emissions what else are they lying about in their products.

@L.Peter
Not very good logic because it contains one huge flaw.