Hong Kong based MINIX Technology Limited is better known for their Android TV boxes and WIndows mini PCs, but the company also makes accessories for computers, and their latest product is MINIX NEO C Plus, a multi-port USB-C adapter providing 9 interfaces including two HDMI output ports capable of 4K UHD resolution at 30 Hz. 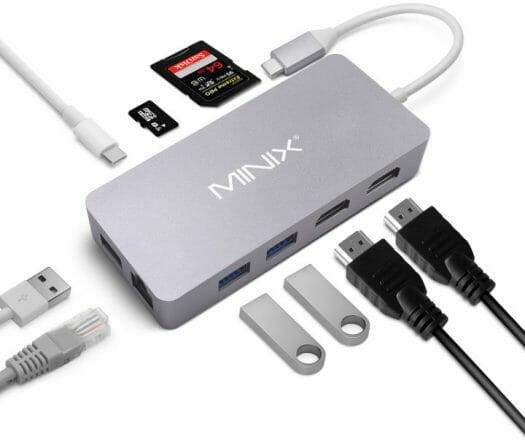 The downside is that – for some reasons – the dual 4K HDMI display support, and triple mirror / dual extend modes are only available for Mac OS. It should also be noted that the HDMI displays connected to the adapter can only display the same thing, so you could configure a triple mirror setup with the two display mirroring a Macbook display for example, and a dual extend mode with both displays providing the same extended desktop. That means triple extend mode – with three independent displays – is not possible. 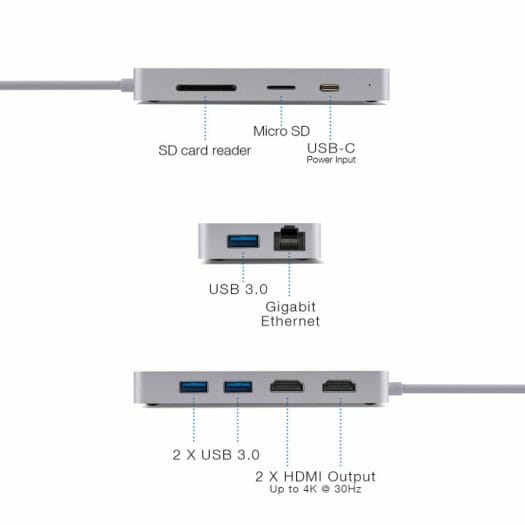 If you think that’s a useful addition to your accessories, MINIX NEO C Plus adapter is sold for $69.99 on Amazon.

I’ve a Lenovo X1 Carbon laptop with USB C ports. Do you know what are the limitations or features supported in Windows 10 with this adapter? Thanks!

I’m expecting a sample soon. Ill give it a try with a Windows 10 mini PC. No Windows laptop here.

Some more comments about Windows (and Linux) compatibility from MINIX themselves:

Due to the current state of USB-C implementation by PC manufacturers it’s not possible to offer universal compatibility.

Compatibility is both hardware and OS dependent, so while it works with some Windows laptops we cannot give any guarantees regarding Windows OS….We’d rather be cautious and only guarantee compatibility with MacBook and MacBook Pros rather than leave customers disappointed whom assume it’s compatibility with all Windows devices.

We haven’t tested with any Linux devices. It has been tested with Nintendo Switch and I can confirm it’s not compatible.

I have been ‘tricked’ into buying one of these devices. The ‘trick’ bit is in not describing how to tell if your laptop can make use of one of these. I don’t have a good answer for that, I had to send a support request to my laptop maker (Asus) to get an explanation of why my device did not work. These devices use USB-C Alternate mode. Apple Mac laptops support Alt-Mode if they have a USB-C jack. Most Windows based laptops don’t. From what I can tell Intel chip sets support Alt Mode but laptop manufacturers are only hooking… Read more »

If you dump the USB descriptors on one of these devices you will see a new device — BILLBOARD. The BILLBOARD device is how you tell the hub to switch the wires between HDMI and USB mode. This device will let you determine if a Windows laptop has Alt-Mode hardware. On my laptop when you look at this device in Hardware Manager it will have a “failed to start device” error message. On a laptop with Alt-Mode support the device will start. Of course I don’t know how to do this test without owning one of these hubs. Bus 001… Read more »

These are actually independent USB-C features (charging and Alt-Mode), but there seems to be a correlation of manufacturers implementing both features if they implement one of them.

Thanks Jon for explanation.
I can prove a problem with Asus ultrabook UX410-UQ pro. Fun thing is that i have Asus USB-C multiport adapter, bought them together just to to be sure they will work fine. On Win10pro i got few sec image on screen before windows switch image back to ultrabook and show no monitor detected in control panel. I think it can be avoided somehow with software support because same HW setup work well on linux dual boot. Both Asus and MS ignore this problem, and they do not have idea or solution for it.

Thank you Jon for sharing the link to this beautiful document from TI on Alternate Modes for USB Type-C! Nice reading.
btw: my laptop (Lenovo X1 Carbon Gen5) has two USB-C ports, the first is used to power the laptop as well as to connect a screen over USB-C, the second port can power downstream USB-C devices as well as connect a screen. Hopefully it will work with this adapter. I will try to order it and let you know about the results.