Since the beginning of the year, we’ve had a worldwide chip shortage that increased the price of components, followed by long lead times. My Twitter feed is often filled with complaints of expensive components (e.g. STM32 being 10 times more expensive), and ever-increasing lead times of up to two years.

But lockdowns and some governments paying people to stay home have completely messed up the supply chain, and with China having reopened a long time ago, many containers are shipping with products from China, only to return half-empty, or not at all.  This behavior can be seen in the US trade deficit that almost doubled in the last year or so, and freight rates have gone through the roof for a while, but especially in the recent weeks/months. 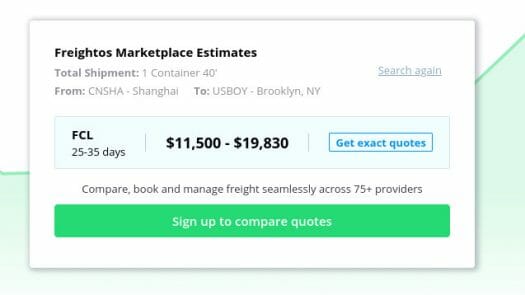 Taking the worst-case scenario into account that’s ten times more expensive than a little over a year ago. The higher shipping freight cost may not directly impact the shipping fees from online retailers like Aliexpress or Banggood, as most of the products are sent by air, even for low-cost shipping options with a 4-6 week delivery time with pricing having increased by around 1.5 times. Having said that if air freight demand increases following the shipping costs increase, it may eventually have a more severe impact on all shipping options.

Feel free to comment if this has already impacted you. Some price hikes are often temporary or “transitory”,  but building new containers and ships do take time, and there may not be a quick fix.

I buy a lot of stuff (crap) from taobao, one 2KG box every 3 weeks or so, and right now that is expensive to get shipped here but not totally insane. I think $30 via EMS. Turns up in a bit over a week.

If that gets more expensive I’m going to have to get some new hobbies. :/

I buy some stuff from Ali to Russia (few dozens of orders per year). And cheap send options almost gone. Now I must pay something even for slow 30-40 days delivery. On the other side – Ali Standard option stay at more or less same price levels and delivery times: 8-12 days. Maybe because slowest type were over sea and become more expensive while other the air or direct railroad are unaffected. Also, I see a lot often “agregated” (where parsels from different sellers in one order collected in intermediate warehouse and packed into one parcel) and “from local warehouse”… Read more »

I think a lot of it is increasing port transit times. After all, even returning containers empty should only double costs.
There is probably also a shortage of crew after many were forbidden to leave their vessels during 2020.

EU want to us paid taxes for microorder(0-1eur)VAT20%, Slovakpost another 2eur, age of cheap transaction is over, EU is big bullshit.

EU just killed China purchases effectively for consumers, not hurting China but the consumers who wanted to buy a 4 dollar led strip for their garden. Now forced to buy the same led strip locally for 14 bucks.

ohh no, how are we supposed to live if we can’t get cheap crap taking 2 month to arrive?

Seriously, people don’t have bigger problems in their lives?

Unless you are shipping cars, ovens or washing machines, or stuff with very bad cost/weight ratios like cheap clothes or shoes, I’m not sure container shipping is relevant, most of the stuff is shipped by air. Cheap or free shipping options from China are mostly unrelated to actual shipping costs but to UPU rules which were contested by Western countries, not sure if they ended up being revised.

A lot of the light stuff is also shipped in containers. They have organizers who bundle shipments of small parcels to optimize costs. Sometimes a small swich can take 3-4 weeks to arrive.

I’ve about SBC shipments using low-cost shipping (4-6 weeks delivery). I’ve been told it’s indeed mostly air freight. One exception may be products/boards with batteries, as there are extra regulatory costs when shipping by air, and shipping by boar can be much cheaper, at least for bulk shipments.

So I got some feedback. The post and carrier service pricing has gone up by about 1.5x, and some companies have not passed those costs to customers yet.

Governments paying people to stay home, is, for me, irrelevant to any supply problems. Bottom line is that if prices from China go up, then less will be sold and China’s economy will be adversely affected. So it is China’s interest not to let this happen. Rethinking how and where chips and the like are manufactured to avoid such shortages may also have to be given more serious thought, although manufacture outside China may result in increased prices because of the nature of higher wages and the like elsewhere. However, it is fair to say that those outside of China,… Read more »

If people stay home instead of working at the factory, and still get the same or more income, supply will not keep up with demand unless more products are imported.

we buy stuff made in China one way or another, doesn’t matter if sold directly from China, or bought locally. We just don’t make things locally, and if we did it would be still more expensive, even if the shipping cost rises even more.

If there is a loser here, it’s not China

I’ve noticed a lot of the things I order from AliExpress can be had from Amazon at the same price. I just ordered a 12/24 car battery charger a few days ago from Ali and got curious and checked Amazon, sure enough found it at the same price and it came from the same company.

This is not a trend I like to see.