Seeed Studio has introduced a new CAN Bus Grove module based on 120 MHz Gigadevice GD32E103 Arm Cortex-M4+ microcontroller with support for CAN FD at up to 5Mbps and controlled by AT command over a serial interface.

The new module appears to be a drop-in replacement for the company’s $19.90 Serial CAN-BUS Grove module based on Microchip MCP2551 and MCP2515, and the main benefit of the new GD32E103 module is that it is much more cost-effective going for only $4.90 including shipping. 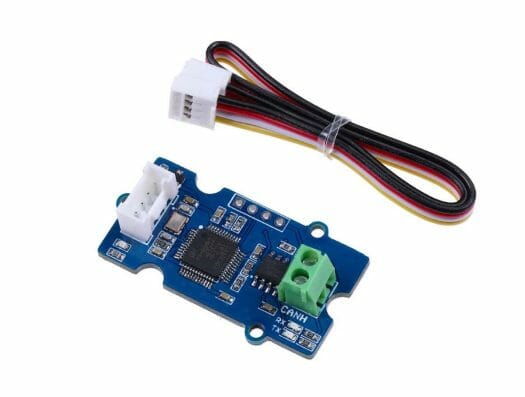 CAN Bus modules and boards are mostly designed for car hacking, but not only, as the CAN bus can find its way into 3D printers, building automation, lighting control systems, as well as medical instruments and equipment. 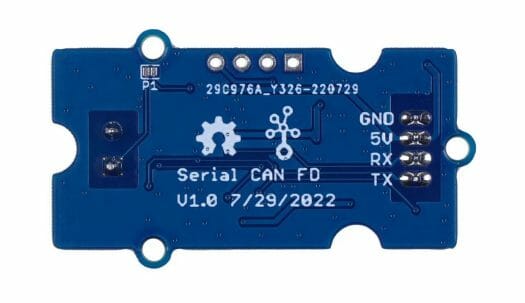 While not explicitly listed in the specifications, the new module can apparently still be fitted with a 120Ω terminal resistor (P1) if needed, just like the first board based on Microchip MCP2551 and MCP2515. Seeed Studio says they wrote firmware to implement the serial port to CAN FD function, but without other details provided. Having said that, the GD32103E CAN Bus module probably uses the same AT command sets as the Microchip module, and documentation for the latter can be found on the Longan Labs website, the company that seems to handle all CAN Bus projects for Seeed Studio. You’ll also find some Arduino sketches there to try out the CAN Bus module.

But since the GD32E103 is an Arm Cortex-M4F microcontroller you’d think you could use the module standalone as well, but Seeed Studio says “it can not be used as an MCU yet, and this feature will be implemented soon in the future”. That probably means they’ll provide Arduino or MicroPython firmware, as documentation and resources to build C programs can be found on the gd32mcu.com website, including a standard firmware library compatible with Arm’s CMSIS (Cortex-M Microcontroller Software Interface Standard).

You’ll notice there’s no CAN bus in the block diagram above, and the datasheet does not refer to the two CAN bus interfaces at all, instead reading “5. Adjust the number of modules and delete CAN.” in the datasheet history section. However, the CAN bus is still documented in the user manual. I’m not sure what happened here…

Maybe gigadevice didn’t pay their CAN license fees, but the silicon is there and working so they accidentally told their customers privately how to use it 😉

That could explain it. I did not know there were CAN license fees. But that would explain the hidden/undocumented CAN bus interfaces in several Chinese processors.

I didn’t know about that either, but Bosch do indeed have patents on CAN-FD and family, and they require licensing https://www.bosch-semiconductors.com/ip-modules/can-protocols/

And pricing is public:

and CAN FD Light

In addition a lump-sum payment of 2,500 EUR for CAN XL

Covering the running royal­ty (if any) for the first 10,000 products

RUNNING ROYALTY FOR TTCAN, CAN FD, CAN FD LIGHT,

For exceeding volumes, a royalty of 1 % of the net sales price

Same price for phy and controller? Or how is that sorted?

Would likely be the GD32C103 device, which should add 2xCAN-FD modules.

When I visit the GD32E103 Series (Value) product page linked in the article I can see:

I suspect they intended it to be one part, and the E103 probably has the hardware. Then some accountant came and asked for royalties.

The only thing that C103 has vs E103 is CAN. I would guess for licensing reasons. Not sure if they can disable it in the E103 or just fly under the radar.

Very strange how the market nowadays is behaving.

STMicro and other established manufacturers have all inventory bough by large customers.

Giga devices, is relatively new on the scene. Even though they claim compatibility with STM32 family, no global car maker is going to put that in their vehicles for fear of expansive recalls.