If you’re old enough you may have a stock of old cassette tapes that may or may not work anymore. The good news is that if you have time on your hands, you could recycle those as a Raspberry Pi Zero enclosure, including even other components like a small battery, battery charging board, and display. That’s exactly what Martin Mander did with his Cassete Pi IoT scroller project that receives notifications via IFTTT service and displays them as scrolling text on a small display connected to the Raspberry Pi Zero W. Here’s the detailed list of components used in this project: Raspberry Pi Zero Wireless Pimoroni LiPo SHIM LiPo/LiIon power supply shim for Raspberry Pi boards Adafruit Micro Lipo charger board with micro USB port Pimoroni 11×7 LED Matrix 150 mAh Li-Polymer Battery Cassette Tape DPDT Slide Switch Vibration motor Once assembly is done, you can flash a Micro SD card with Raspberry Pi OS and install a Python script […]

A few months ago, I tested Qoitech Otii Arc power meter & DAQ system designed for developers of IoT devices, and fount out it would be incredibly useful to developers of battery-operated devices since it shows voltage and current graphs synchronized with the serial output making it easy to see where software might be optimized. The system can also capture analog and digital signals from the DUT and emulate batteries with user-defined characteristics. But this weekend, I’ve come across a very similar solution with ZS1100A IoT power meter that also happens to be compatible with Sigrok open-source signal analysis software, and the corresponding Pulseview GUI. ZS1100A IoT power meter specifications: Measurements Output Voltage Range – 0 to 6 V programmable in 10 mV steps with +/- 5mV accuracy, Current Measurement Range – -0.5 A to 1.5 A (linear range) with < 0.1 μA resolution,  accuracy of 1% of measured value ± 0.2 μA Max Output Current 1 A constant current […]

When we covered ESP32 powered TTGO T-Watch-2000 smartwatch this week-end, people noted that with a 350 mAh battery, the watch would last about 3.65 days considering a 4mA drain with the screen always off, WiFI and Bluetooth off, and around 65mA when the screen is on good for about 5 hours of continuous use without Bluetooth nor WiFi. But it’s possible to make a much more-efficient ESP32-S2 Wifi board, as demonstrated by Olimex with their upcoming ESP32-32-Devkit-LiPo based on ESP32-S2-Saola-1 with circuitry to support LiPo batteries. They designed the board with an ultra-low-power power supply circuit which makes current consumption during sleep only 6uA, 4 of which are due to the battery measurement resistor divider, meaning the board should consume only 2uA in sleep mode or about 10 times less than other ESP32 Olimex boards. When reviewed Qoitech Otii power measurement & DAQ tool, we also noted power consumption could be further reduced by switching to deep sleep mode. I […]

I’ve been using Xiaomi Mi A2 smartphone since December 2018. At the time, it shipped with Android 8.0, but I soon got an update to Android 8.1, and later to Android 9.0. I’m quite satisfied with the phone as it receives (almost) monthly security updates, works reasonably faster, features a decent camera, and overall does the job. The biggest complaint I have so far is about storage. It comes with 32GB eMMC flash and no MicroSD card slot, and it’s constantly full, so I have to clear the cache often, and sometimes I need to uninstall an app and reinstall it in order to install an update. Sometimes in January, I got a notification about Android 10 updates, but since I was out of space, I only installed it late February after some serious storage cleaning… The update went smoothly, and after some adjustment to the settings I was back to a usable phone, but I soon noticed a warming […]

Gumstix Raspberry Pi Zero Battery IMU board is a “pHAT” add-on board for Raspberry Pi Zero that includes a holder for two AA rechargeable batteries providing up to two hours of battery life, as well as 6-axis motion sensor. Raspberry Pi Zero Battery IMU board key features and specifications: Storage – 256 Kbit I2C Serial Board EEPROM to store RPi HAT settings Sensor – Bosch BMI160 3-axis accelerometer and 3-axis gyroscope IMU Battery holder for 2x AA batteries Battery Charger – Linear Technology LTC4060 fast battery charger for single, 2-, 3- or 4-series cell NiMH/NiCd batteries. (See PDF datasheet for details) Switch slide for On/Off The battery can be charged through the Micro USB port found in Raspberry Pi Zero (W) board. This board would allow people to make a portable camera by adding the official RPi camera. It would be a nice board to use as UPS for short power failures, but there’s no mention of such features so […] 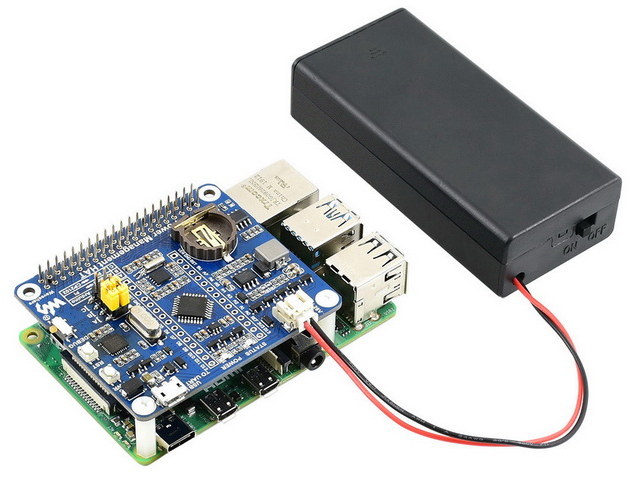 If your Raspberry Pi project runs on battery, but may not need to be turned on 24/7 in order to lower power consumption, you’d have to find a way to schedule on and off times, and power off the board cleanly either when the battery is almost depleted, or your timer requires it There’s no built-in support for this in any of the Raspberry Pi boards, but Waveshare Power Management HAT can help you do just that since it adds an RTC, and enables software-controlled power timers and battery monitoring via an Arduino compatible ATmega328 MCU. Power Management HAT specifications: MCU – Microchip ATmega328P-AU MCU Storage – CAT24C32 EEPROM USB – 1x micro USB port for serial communication via CP2102 UART to TTL chip RPi Interface – 40-pin Raspberry Pi GPIO header Misc NXP PCF8523 RTC & calendar chip + CR1220 battery holder DEBUG switch (9) to either: Power directly Raspberry Pi board Let the “Arduino” MCU manage the power […] 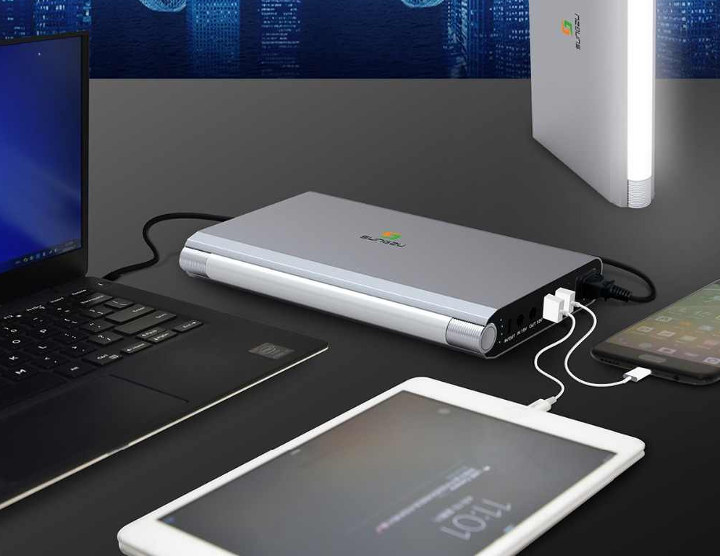 Power banks are normally comprised of a battery that you can charge from the mains, and then delivers power over USB when you connect it to your smartphone, tablet or camera while on the go. Some devices like laptops, TVs, or fans are usually powered directly by the mains, or a power brick connected to the mains, and if you’d like to charge your devices on the go, you could do so with a portable AC power station. Those are often fairly bulky, but recently I’ve seen Arun showcase an AC 100 watt portable power station at IFA 2019 that looks fairly compact. It’s not available yet through, and there are few technical details. There are however several such power banks on Aliexpress including Sungzu SKA100 power bank that offers DC outputs and one 220V/110V AC output delivering up to 100 watts. SKA100 power bank specifications: Input Voltage Range – 15-30V DC up to 3A via power adapter or solar […]