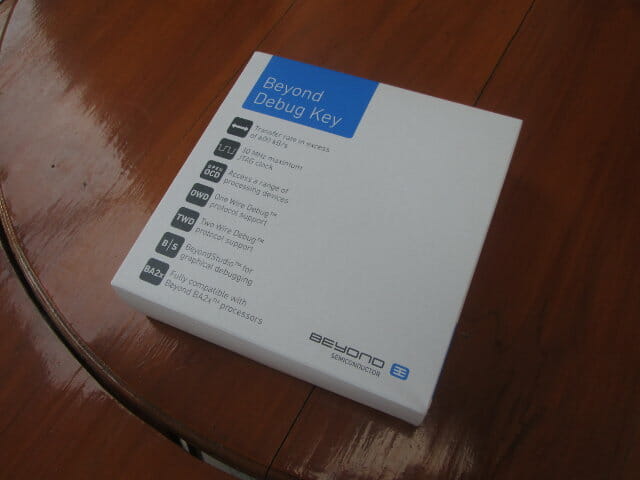 Beyond Semiconductor, a fabless semiconductor company based in Slovenia which develops their own 32-bit BA2x IP cores, has sent me one of their development tool, namely Beyond Debug Key supporting JTAG and UART interfaces either with BeyondStudio for the company’s BA2x processor, or the open source suite OpenOCD for other processors. Since I don’t have any Beyond Semi boards, I instead configured it, and quickly tried it with Atmel SAMA5D3 Xplained ARM Cortex A5 development board, and OpenOCD (Open On-Chip Debugger). The debug tool comes in the package above describing the key features of the kit: Performance Transfer rate in excess of 600 kB/s 30 MHz maximum JTAG clock Less than 20 μW power draw from target board Compatibility Fully compatible with Beyond BA2x processor family Access any 8-bit, 16-bit, 32-bit or 64-bit processors via JTAG Works with all JTAG compliant devices Software Support OpenOCD for access to a range […] 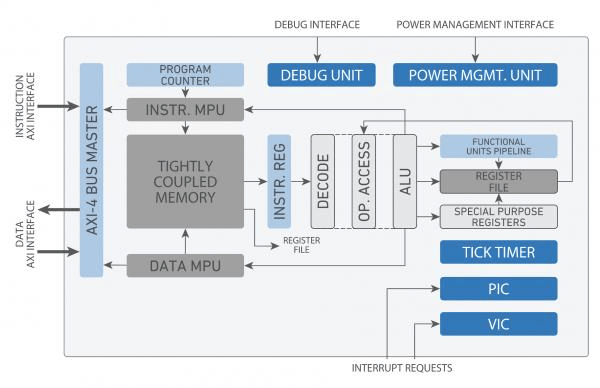 Beyond Semiconductor and CAST have jointly announced BA20 32-bit embedded processor core with PipelineZero Architecture (zero-stage execution pipeline), that rivals with ARM Cortex A4 in terms of performance per MHz, while using about the same silicon area as an ARM Cortex M0+. which could be critical for applications such as wearables, sensors, and wireless communication, that may require both a small footprint and high performance efficiency. The company’s PipelineZero micro-archirtecture can execute one instruction per cycle, hence saving energy by doing more in less time, and by operating at lower clock rates. Key features listed for BA20 IP core: PipelineZero architecture for high performance efficiency with tiny silicon footprint 3.04 DMIPs/MHz (vs ARM Cortex M4: 1.25 DMIPS/MHz) 3.41 Coremarks/MHz (vs ARM Cortex M4: 3.40 CoreMarks/MHz) 2µW/MHz (vs ARM Cortex M0+: 3µW/MHz) 10K gates (0.01mm2) in 9-track 40G (vs 0.009mm2 for ARM Cortex M0+) BA2 ISA Extreme Code Density for less […] 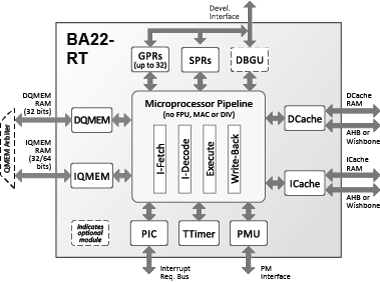 I would normally not mention a Bluetooth audio chip in this blog, but you may remember my posts about Beyond Semi BA21 and BA25 RISC cores. The Slovene company’s IP cores are not found in many silicons right now, but one Chinese fabless semiconductor company called Beken Corporation, has chosen BA22-RT core instead of an ARM core for their latest Bluetooth audio chip. Beken required a system capable of supporting real-time audio decoding plus a Bluetooth stack with the A2DP (Advanced Audio Distribution Profile), AVRCP (Audio/Video Remote Control Profile), and HFP (Hands free Profile) protocols, and it also had to provide both a low cost and low power consumption solution. During their evaluation of several 32-bit IP cores, Beken engineers noticed their program code would fit into a 128KB memory using BA22-RT (Real Time) core, instead of 170 KB for a competing solution simply referred to as “the most obvious supplier”, which is likely to be […]

You know ARM, MIPS, and maybe PPC processor cores, but have you ever heard about Beyond Semiconductor RISC architecture? I hadn’t, until I read an article on EETimes. Beyond Semiconductor, a company founded in 2005, and based in Ljubljana, Slovenia, has apparently released its own embedded cores for a while including BA12, BA14 and BA22 which are respectively equivalent to ARM9, Cortex A9 and ARM11 in terms of performance. They count big names such as STMicro, Lattice Semi and Ericsson among their licensees. More recently, the company announced its first application processor called BA25, that equivalent to Cortex A8/A7 architecture with 1.7 DMIPS/MHz, and is clocked up to 800 MHz on 65nm LP. Beyond BA25 32-bit processor designed for systems running applications on general-purpose operating systems such as Linux and Android, and targets applications such as set-top boxes and media players, Image and video processing systems, and wireless, battery-powered, or […]