Beyond Semiconductor, a fabless semiconductor company based in Slovenia which develops their own 32-bit BA2x IP cores, has sent me one of their development tool, namely Beyond Debug Key supporting JTAG and UART interfaces either with BeyondStudio for the company’s BA2x processor, or the open source suite OpenOCD for other processors. Since I don’t have any Beyond Semi boards, I instead configured it, and quickly tried it with Atmel SAMA5D3 Xplained ARM Cortex A5 development board, and OpenOCD (Open On-Chip Debugger). 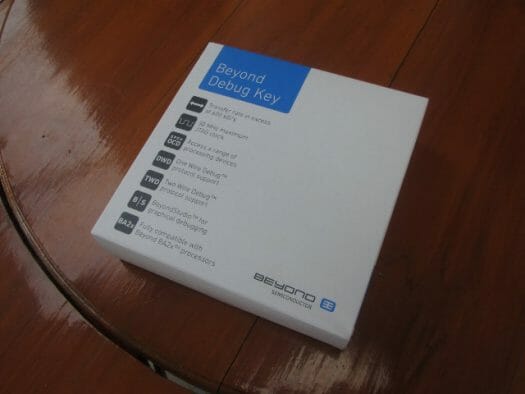 The debug tool comes in the package above describing the key features of the kit: 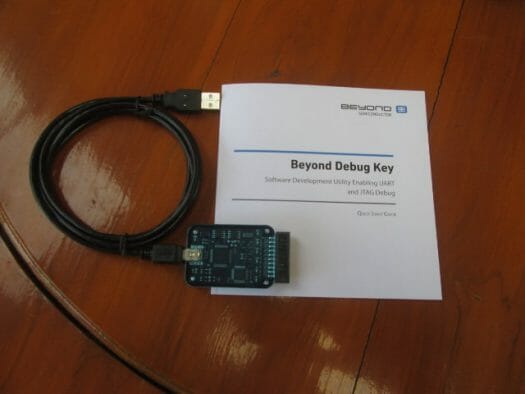 The kit include the Debug Key, a mini USB to cable, and a user’s manual describing the kit, explaining how to configured it with Windows and Linux computers, and listing the seven LED behaviours to diagonalize the connection. The tool uses a 20-pin JTAG connector, so as I did not want to wire JTAG signals manually, I went through my boards trying to find one with 20-pin JTAG receptacle, and I ended-up connecting it to Atmel SAMA5D3 Xpained development board as shown below. 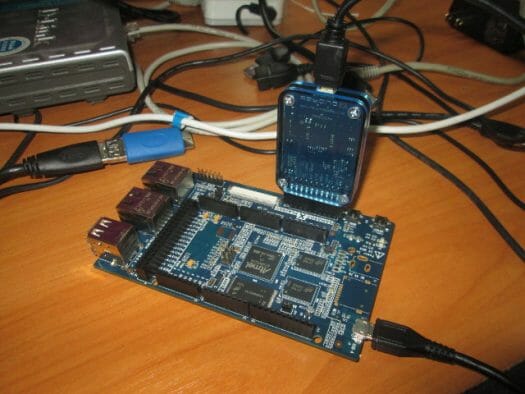 JTAG can be used for board bring-up and flashing firmware, so I initially thought I would show how to configure the debug tool, and flash a firmware image to the board, but since Atmel SAMA5D3 configuration are not available, and it was my first time with OpenOCD, it took a little longer than usual, and I’ll just show the configuration part, and successful (I think) connection to the board.

The Debug key support both Windows and Linux, but I did everything from a computer running Ubuntu 14.04 LTS. The first thing is to install OpenOCD which is part of Ubuntu repo:

So it’s very easy to install, but OpenOCD version in Ubuntu is 0.7.0, and depending on the board you are using, you may want to build latest release (0.8.0), or directly from the source code tree:

OpenOCD requires config scrips both the JTAG key, and the target board. Beyond Semi provided the configuration files for their Debug Key, so that part was easy, and all I had to do was to create beyond.cfg with:

You also need to create a udev rules to be able to access the JTAG debugger as a normal user. so I created 52-beyong-jtag.rules in /etc/udev/rules.d/ with the line:

At this stage, if you run OpenOCD with beyond.cfg only, you get the following output:

At this stage, I had to find or create the script for Atmel SAMA5D3 CPU, and you’ve got a list of scripts in /usr/share/openocd/scripts/ which can help. There’s also site claiming to support Atmel SAMA5D3 with OpenOCD, but checking out the code asked me for a password. So instead I read Atmel SAMA5D3 datasheet (Chip Identification section), where I found relevant information such as SRAM start address, and Cortex-A5 JTAG IDCODE (0x4BA00477). The SRAM address is exactly the same as SAM9G45 processor which has a config files in OpenOCD, namely at91sam9g45.cfg which also includes at91sam9.cfg, so I simply copied both files to create my own at91sama5d3.cfg,  by simply replacing set _CPUTAPID 0x0792603f by “set _CPUTAPID 0x4ba00477”.

Here’s the output if I use both the Debug Key and SAMA5 scripts:

So despite one error, the connection appears to be successful, and both TDO and TDO LEDs blinked on the debug key, which means both JTAG Tx and Rx were active. That’s all I have achieve so far with the amount of time I had.

If you are interested in getting such JTAG Debugger, you can purchase Beyond Debug Key for 90 Euros directly from Beyond Semiconductor.

Yet another FTDI based JTAG adaptor.