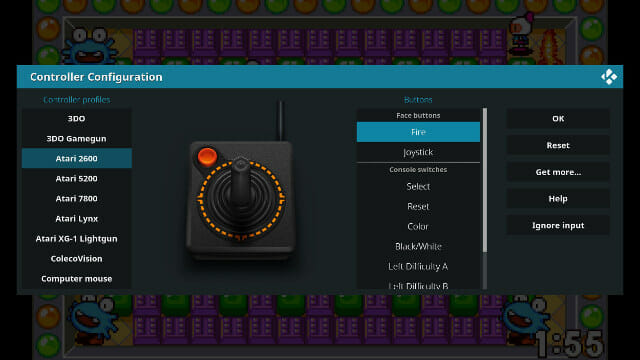 Most Kodi users are now running Kodi 17.x Krypton that was initially released in February 2017, with the latest point version being Kodi 17.6. At the time of Krypton release, the developers had also started working on Kodi 18 “Leia” which should now be in “alpha”, and the stable release may only be a few months away although Kodi developers do not provide an ETA. What they did provide however – via Martijn Kaijser at FOSDEM 2018 – is a progress report for Kodi 18 “Leia”, as well as some insights into Kodi 19 whose development has just started. Kodi 18 has gone through a lot of cleanup with the code upgraded to C++11 standard, duplicate code and obsolete libraries removed, dropped unmaintained feature, and so on. They also moved non-core features such as audio encoders and decoders, PVR, picture decoding, etc…  to external plugins. This work resulted into 299,476 […] 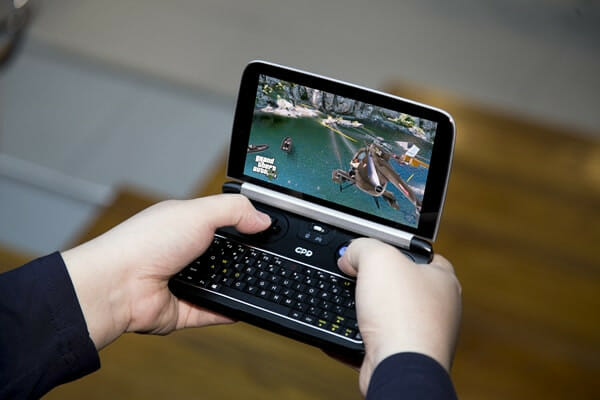 GPD Win was a Windows 10 portable game console powered by an Intel Cherry Trail processor launched in Indiegogo in early 2016, that managed to raise over $700,000 from nearly 2,300 backers. The company has been teasing an update for a while now, powered by an Intel Core m3-7Y30 processor with 8GB RAM, a 128GB M.2 SSD, and has just launched it on Indiegogo where it has raised close to $600,000 from almost 1,000 backers in the first few hours. GPD WIN 2 external design has gone through some tweaks, but it’s mostly the same as the first model except it’s larger with a 6″ instead of 5.5″ and some buttons have been moved around, but the real differences can be found under the hood: SoC – Intel Core m3-7Y30 dual core quad thread Kaby Lake processor @ 1.00/2.60 GHz (burst frequency) with 24EU Intel HD graphics 615 @ up […] 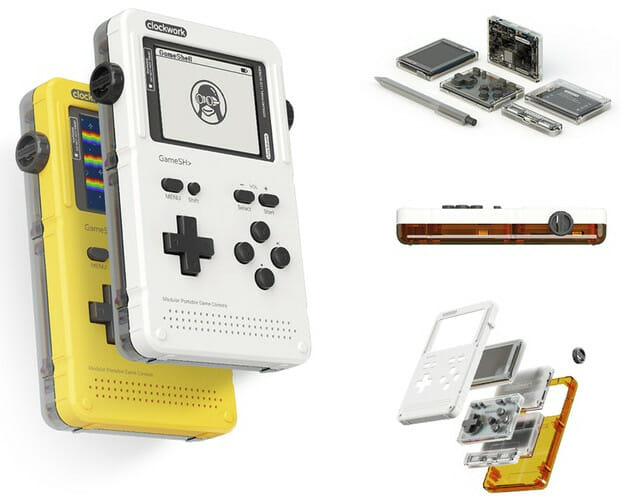 Allwinner R16 with its lowly four Cortex A7 cores and Mali-400MP2 GPU would not normally come to mind when designing a gaming console. But Nintendo used the R16 processor twice in their retro gaming consoles: NES Classic and SNES Classic Edition. Clockwork, a startup based in Hangzhou, China, decided they could also do gaming console with the processor: Gameshell. But their product is quite different, as it’s both a portable console with 2.7″ display, and a development platform with the console based on Clockwork Pi development board, and an Atmel AVR (Arduino) based keypad board. Gameshell specifications: Clockwork Pi development board SoC – Alwinner R16-J quad core Cortex A7 processor @ 1.2 GHz with Mali-400MP2 GPU System Memory – 512MB or 1GB (in future revision of the board) Storage – 1x micro SDHC slot Video Output / Display I/F – 18-bit RGB display interface, micro HDMI (planned in revision of […] 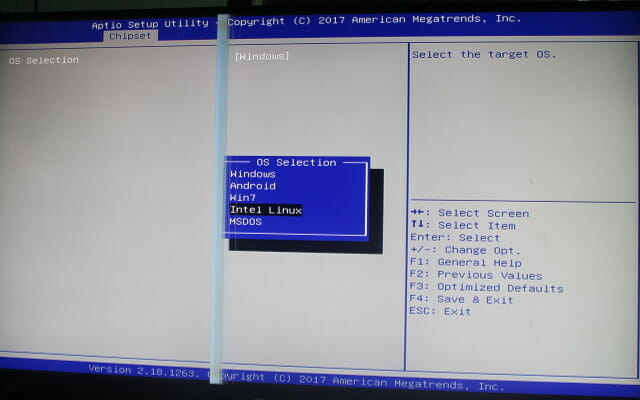 I completed the review of MeLE PCG35 Apo with Windows 10 Home a few days ago, and as promised, I’ve now installed the freshly released Ubuntu 17.10 in the Intel Celeron J3455 “Apollo Lake” mini PC. I’ll start by shortly explaining the step to install Ubuntu 17.10 in the M.2 slot, although you could also install it to the internal eMMC flash replacing Windows 10, then show what works and what does, and finally include a video reproducing the tests I usually do in Windows 10. How to Install Linux in MeLE PCG35 Apo This partially follows the procedure I used to run (not install) Ubuntu 16.04 on MeLE PCG03 Apo mini PC. First you’ll need to download the ISO of your choice (ubuntu-17.10-desktop-am64.iso in my case), and prepare a bootable USB flash drive with the software of your choice be it Rufus, Startup Disk Creator or others. I did […] 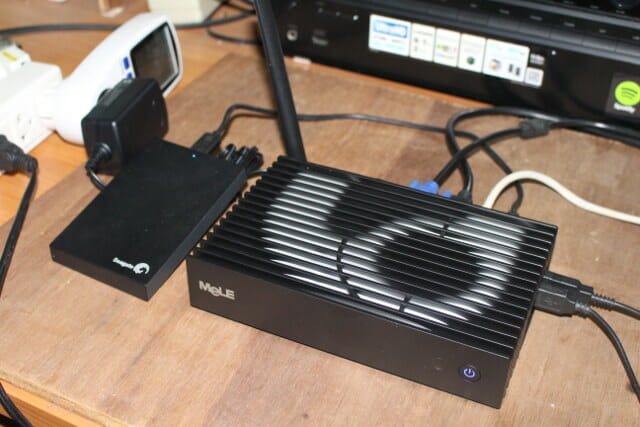 Laptops and mini PCs powered by the new generation of Intel Gemini Lake processors are coming soon, but companies are still launching Apollo Lake based products with various features. MeLE PCG35 Apo mini PC is one of them, and what makes it interesting compared to most of the competition is support for 80mm M.2 SSDs and 2.5″ SATA drives, on top of featuring a Celeron J3455 processor, one of the most powerful of the family. I took photos of the mini PC, accessories, and internal design in the first part of the review, so I’ll report about my experience with Windows 10 Home, explain how to manage the different drives, and test stability under load. MeLE PCG35 Apo Setup, Drives Configuration, Display Settings Last time, I’ve showed how to install an M.2 SSD and 2.5″ SATA hard drive inside MeLE PCG35 Apo, so I just have to connect a few […] 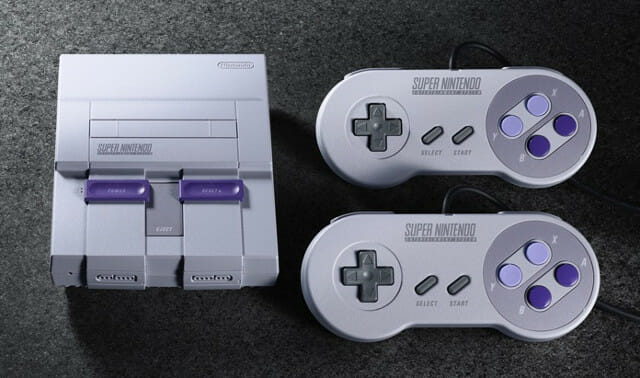 Last year, Nintendo introduced NES Classic Edition mini console running 30 games, which was latter found to be based on Allwinner R16 processor, eventually leading to some hack to install RetroArch on the device. Sadly the company decided to discontinue mass production of the mini console, but Nintendo is now back with another retro mini console thanks to Super Nintendo Entertainment System (SNES) Classic Edition. The console will run a few less games, 21 in total including Donkey Kong Country, Final Fantasy III, The Legend of Zelda: A Link to the Past, Mega Man X, Star Fox, Street Fighter II Turbo: Hyper Fighting, Super Mario Kart, Super Mario World, and others. Full technical details have not been disclosed yet, but the console will come with two wires game controllers, a USB power adapter, and connect to your TV via HDMI. We’ll have to see if they still kept the same […] 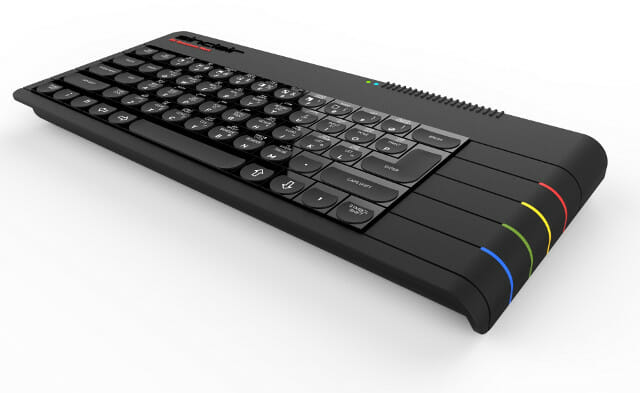 ZX Spectrum keyboard computer was launched in April 1982 in the United Kingdom, and 35 years later, a team of developers has now been working on ZX Spectrum Next somewhat resuscitating ZX Spectrum by emulating Z80 processor in a Xilinx FPGA, using an optional Raspberry Pi Zero board as an accelerator, and adding some modern features like HDMI output and WiFi. While the case is only a 3D rendering for now, they have a working board prototype with the following specifications: FPGA – Xilinx Spartan-6 FGPA emulating Z80 processor in 3.5Mhz and 7Mhz modes System Memory – 512KB RAM (expandable to 1.5MB internally and 2.5MB externally) Storage – SD Card slot, with DivMMC compatible protocol used in the original ZX Spectrum Video Hardware sprites, 256 colours mode, Timex 8×1 mode etc. Output: RGB, VGA, HDMI Audio – 3x AY-3-8912 audio chips with stereo output + FM sound Networking – Optional […] 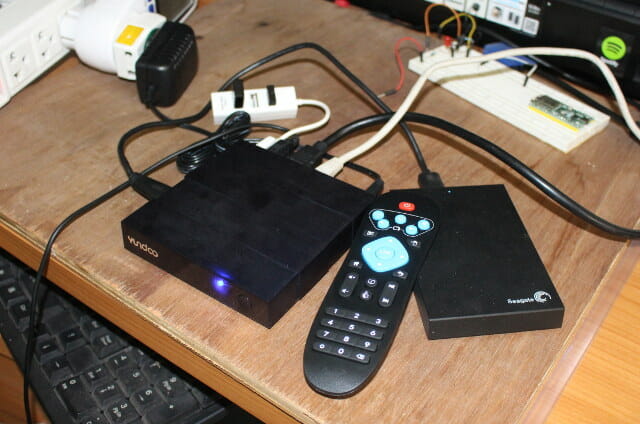 Yundoo Y8 is one of the first Android TV boxes / mini PCs powered by Rockchip RK3399 hexa-core processor to be launched. GearBest sent me a review sample, and since I’ve already taken it apart in the first part of the review, I’ll report my experience with the firmware in terms of stability and performance, as well as audio & video capabilities with TVMC (Kodi fork), and more. First Boot, Setup, and First Impressions I’ve first connected a few peripherals Seagate USB 3.0 drive to the USB port, a USB keyboard to one of the USB 2.0 port, and a USB hub to the other one with two USB RF dongles for MINIX NEO A2 Lite air mouse, and Tronsmart Mars G01 gamepad. After adding Ethernet and HDMI cable, I pressed the power button on the unit to start it up. Please note that the remote control cannot turn on […]