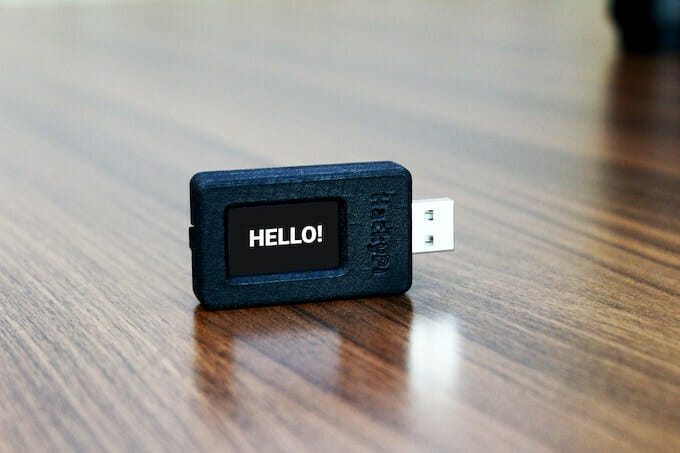 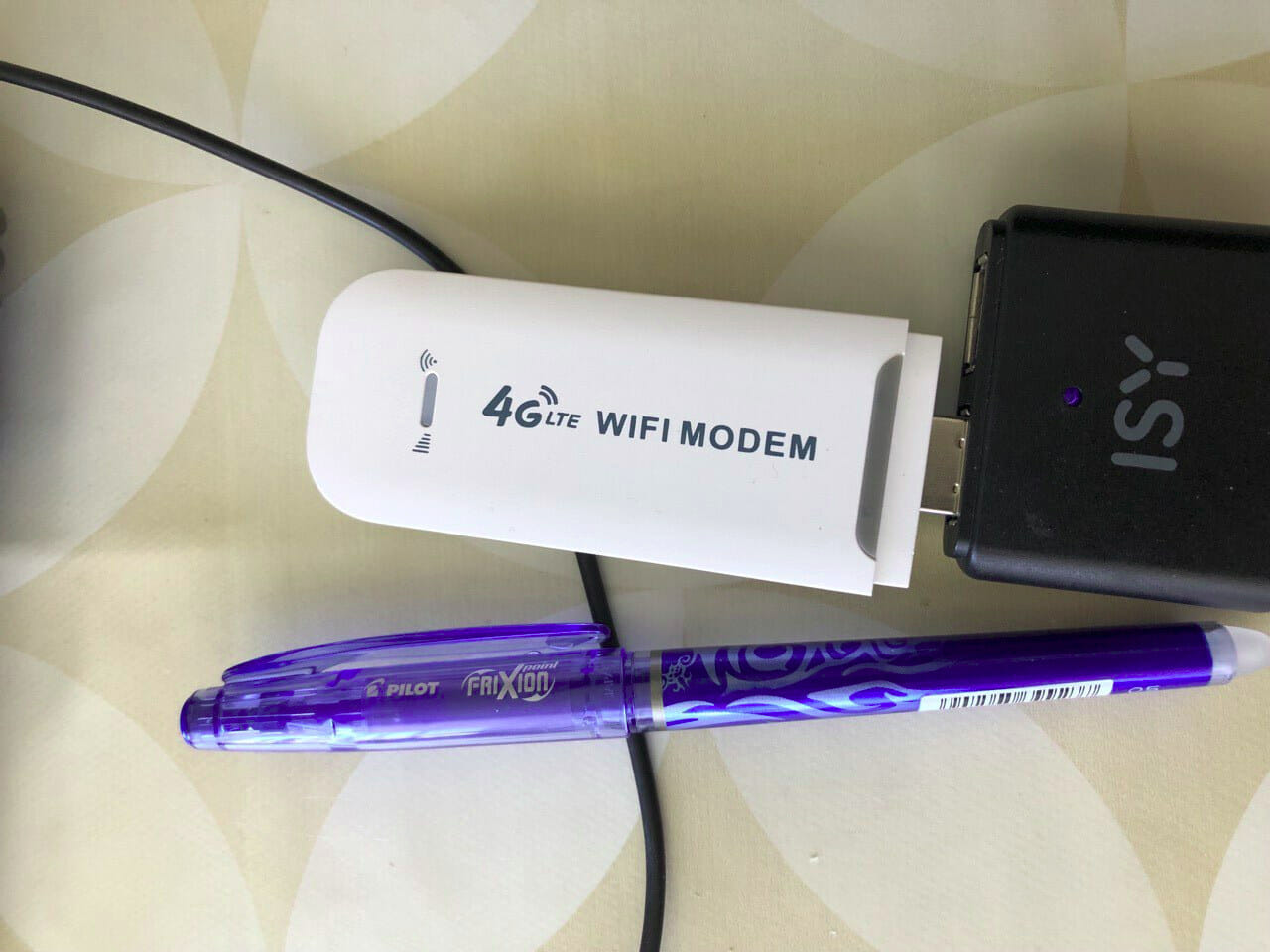 Some ultra-compact 4G LTE wireless routers housed in what looks like a largish USB dongle are based on Qualcomm Snapdragon 401 (MSM8916) quad-core Cortex-A53 processor and have been hacked to run Debian 11 with Linux 5.15 instead of the pre-loaded Android OS. Soon after Extrowerk had purchased a ~$20 “4G LTE WiFi modem” USB dongle, he noticed it would show as “Android” when connected to his PC. It also turned out that Chinese hacker HandsomeYingYan had already done some work on the device modding the lk2nd bootloader and the Linux kernel for the OpenStick project for “mainline Linux on msm8916-based 4G USB modem”, and documented his work (in Chinese) to run Debian 11 on the “4G USB WiFi Modem” pictured below. Let’s go through some of the specifications of the said wireless router: SoC – Qualcomm Snapdragon 410 (MSM8916) quad-core Arm Corte-A53 processor with System Memory – 512 MB RAM […] 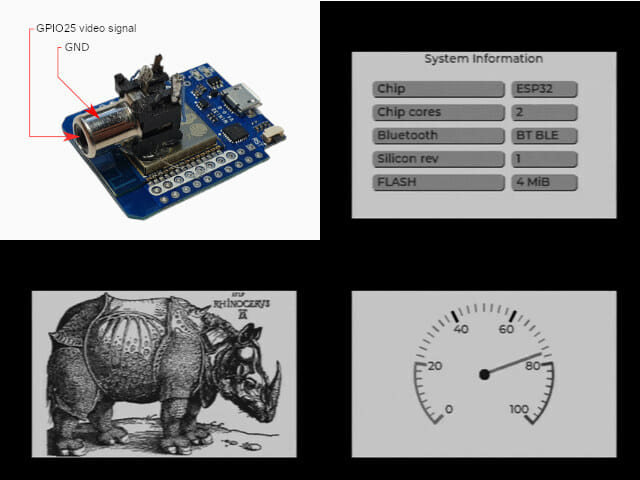 It’s been possible to use the I2S for video output on ESP8266 and ESP32 chips for years, but aquaticus’ ESP32 Composite Video Library is may simplify the task of outputting PAL, NTSC, or SECAM video signals from any Tensilica-based ESP32 platforms. The library does not require any external hardware, and you can just connect an RCA connector to GPIO25 (I2S data) and GND, plus integration with the LVGL library makes it easy to create graphical user interfaces as showcased with the captures below.   The library supports grayscale video output (no color at this stage), multiple resolutions from 384×288 to 720×288 at up to 25 or 30 Hz, six different pixel clocks for PAL/SECAM and NTSC, as well as six framebuffer formats with namely RGB565, RGB332, Grey 8 bits/pixel, Grey 4 bits/pixel, Monochrome 1 bit/pixel, and LVGL monochrome 1 byte/pixel. You’ll find the source code for the ESP32 Video Composite […]

Ikea VINDRIKTNING PM2.5 air quality sensor functionality can be augmented with an ESP8266 WiFi board or module, and open-source firmware adding MQTT, or the popular Tasmosta firmware for more features. Out of the box, Ikea air quality sensor simply shows green (good), yellow (ok), and red (not good) colors to indicate the level of pollution with PM2.5 levels. But Sören Beye (Hypfer), who also happens to have developed Valetudo firmware for smart vacuum cleaners, has added a Wemos D1 Mini board to his sensor and developed open-source firmware with MQTT support. You’ll need to open the air quality sensor, and solder three wires between the ESP8266 board and the 5V, GND, and Tx (data) pin from the Ikea VINDRIKTNING mainboard. After flashing the firmware, you still get the original LED indicator plus PM 2.5 air quality data sent over MQTT and WiFi.  The update system supports Home Assistant Autodiscovery with […] 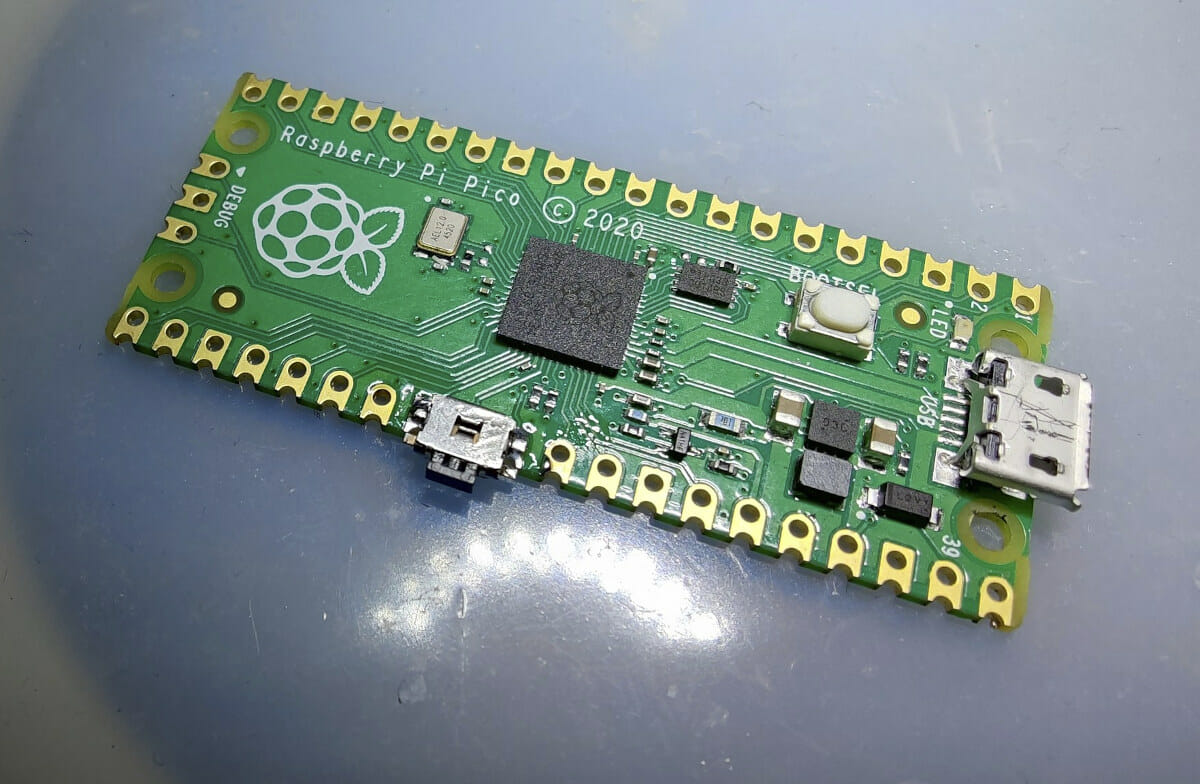 The Raspberry Pi Pico is a nice little board, but if you program in C language, you’d need to disconnect the micro USB cable each time you’d like to flash the UF2 firmware. That’s not convenient and could damage your board over time.  The Raspberry Pi Foundation even decided to write a blog post explaining how to add a reset button to your Raspberry Pi Pico using a breadboard circuit. Here’s what it looks. That works but you may want to use that breadboard for another circuit, so the reset button takes space. Another solution is to program with a Raspberry Pi board and use SWD mode to upload code using the debug port, instead of using mass storage (BOOTSEL) mode. I’ve also found out that most baseboards for the Pico board will include a reset button. But this morning, I’ve come across another solution that looks pretty neat. The […] 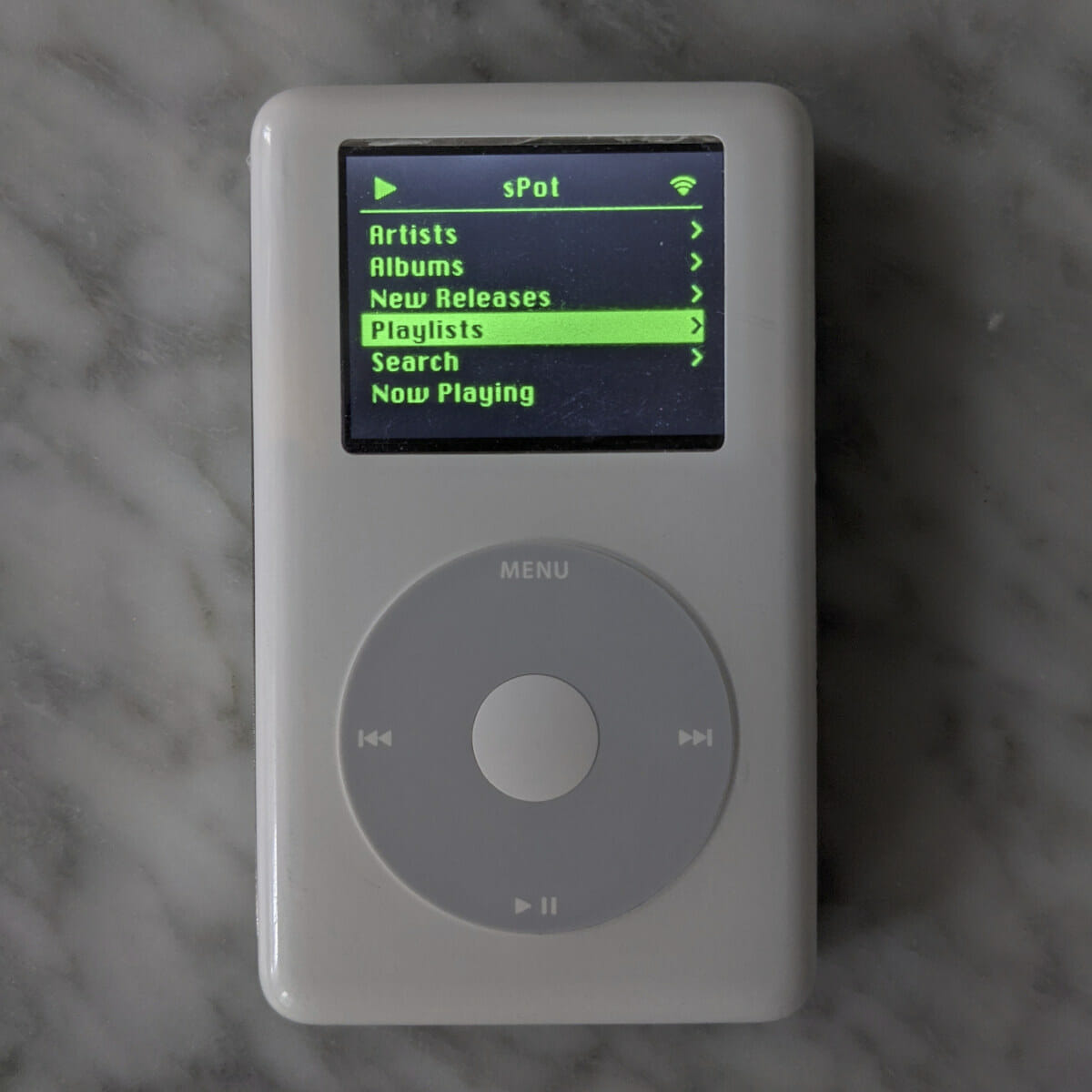 Guy Dupont got a bunch of 2004, fourth-generation iPod Classic MP3 players from his mother-in-law, and instead of playing MP3 files on the media players, he decided to repurpose one with a Raspberry Pi Zero W to be able to stream music from Spotify over WiFi. The resulting project is called sPot (ess-pot), and looks just like an original iPod, but it’s a Linux device that can stream/search via Spotify with a UI written in Python and based on the original iPod experience. But apart from the enclosure, and the original “click wheel” there’s not much left from the original design. Besides the Raspberry Pi Zero W SBC and iPod enclosure, the sPod includesAdafruit Mini LiPoly/LiIon USB Charger and PowerBoost 1000 Basic boards for charging and power management,  a 1,000mah,3.7V rechargeable li-ion battery, vibration motor discs For haptic feedback, a 2-inch Adafruit TFT display, and a few other components, wires, […]

FOSDEM is an open-source developer event that takes place on the first week-end of February every year in Brussels, Belgium. Every year except this year, as due to COVID-19 restrictions, FOSDEM 2021 will take place online like most events these days. The schedule has been up for some time, and today I’ll look at some of the interesting talks mostly from the Embedded, Mobile and Automotive “virtual devroom” but also other tracks. Saturday, February 6, 2021 13:00 – 14:00 – From Reset Vector to Kernel – Navigating the ARM Matryoshka Long gone are the times of executing the OS in-place from memory-mapped flash upon reset. A modern SoC now comes with complex mask ROM firmware, with driver, filesystem, protocol and crypto support for loading… yet another bootloader. In his talk, Ahmad follows this chain of bootloaders until the kernel is started, stopping along the way for RAM setup, peripherial initialization, […] 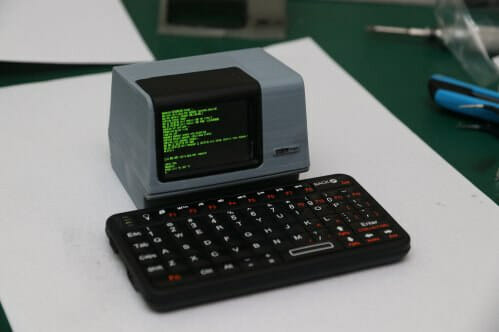 The relatively popular Digital Equipment Corporation (DEC) PDP-11 16-bit minicomputers started selling in the 70s, and were still available in the earlier 90s. While being stuck in Europe due to COVID-19 restrictions, Jeroen Domburg (aka Sprite_tm) decided to design a tiny replica of a DEC VT102 PDP-11 terminal based on ESP32 wireless SoC and running 2.11 BSD UNIX through SimH PDP11 emulator. Jeroen had to do significant work to make SimH works on ESP32 however, with notably the need to optimize the memory footprint: Obviously, ‘just port SIMH to an ESP32’ is a bit of a understatement for the effort that was needed. Even while SIMH is a pretty nice program when it comes to not using any unique APIs, it still is a system developed for a full-blown workstation and assumes RAM is cheap and plentiful. In order to get it running on an ESP32 and still have some […]