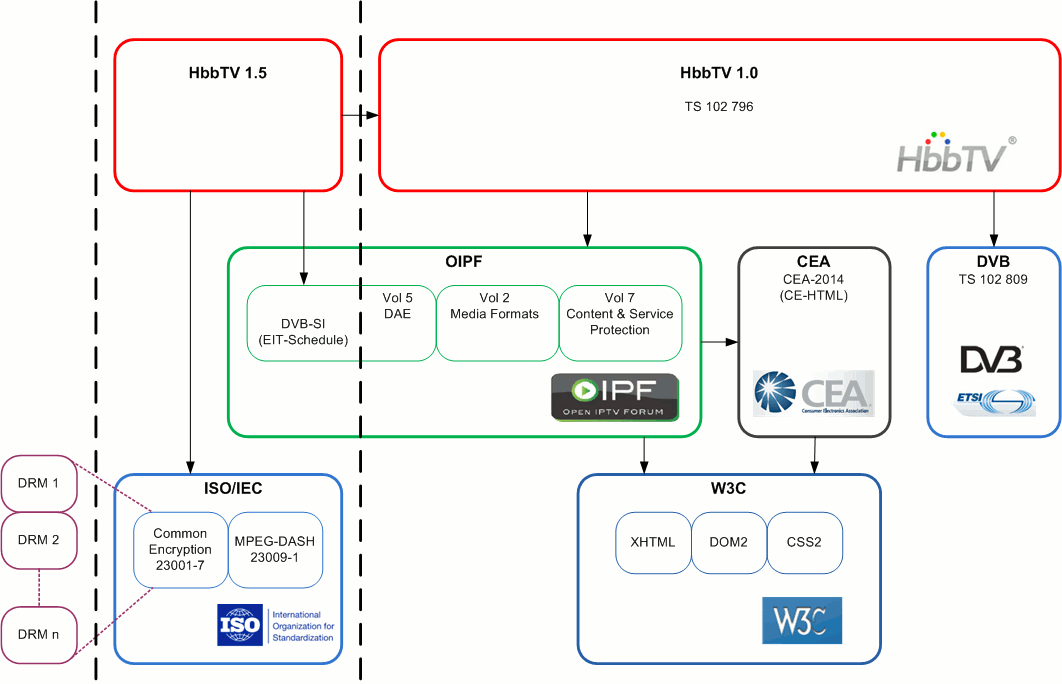 The HbbTV (Hybrid Broadcast Broadband TV) consortium, an European initiative for web-based smart TV applications for TVs and set-top boxes, has recently released version 1.5 of the HbbTV specification. The latest specification adds support for HTTP adaptive streaming based on MPEG-DASH (ISO/IEC 23009-1), improving the perceived quality of video presentation on busy or slow Internet connections. It also enables content providers to protect DASH delivered content with multiple DRM technologies based on the MPEG CENC specification (ISO/IEC 23001-7). Finally, HbbTV Version 1.5 significantly enhances access to broadcast TV schedule information (DVB-SI EIT-Schedule), enabling operators to produce full 7-day electronic program guides (EPG) as HbbTV applications that can be deployed across all HbbTV receivers to provide a consistent user experience. The diagram above show the main improvement of HbbTV 1.5 over HbbTV 1.0 that is, as mentionned above,  EIT-Schedule for EPG, MPEG-DASH for streaming video and MPEG CENC for multiple DRM schemes. The ISO/IEC blue rectangle is the part of the […]

Shenzhen Coolech Technology demoes an HbbTV Digital TV Set-top Box (STB) at Cebit 2012, in Hanover, Germany.  HbbTV (Hybrid Broadcast Broadband TV) is a new European standard for web-based smart TV applications for TVs and set-top boxes. There are already plenty of STB solutions and Smart TVs offering Over-The-Top (OTT) features where TV channels and internet data are superimposed, but those are usually proprietary and HbbTV offers a standard that can be used by broadcasters all over Europe. Here are Coolech’s HbbTV DTV STB specifications: M-Star MIPS CPU clocked at 800 Mhz. HDMI DVB-T/T2 and DVB-S/S2 support. Ethernet SD Card 3x USB host IR Sensor SPDIF Audio Out There is no info on the OS except it does not run Android, so it must be Linux… Charbax interviewed the company at CeBit 2012 where you can learn more about the device and see a demo of ARD HbbTV Interop Portal (ARD is a TV channel in Germany). The company did […]

Netgem will be present at IBC 2011 in Amsterdam this week. They have updated their website this week, where we can see their current Sigma Designs platform such as the N5200 Internet OTT adapter  and N8200 Media Center as well as the new platform based on Broadcom solutions namely: N7500 Media Center based on Broadcom BCM7230 with 1 Tuner and flash storage N8400 Media Server based on Broadcom BCM7413 with 2 to 4 tuners and HDD. In a separate presentation, they also mention the Netbox N9700 which will be released in 2012. There is no mention of the processor used (probably Broadcom) , but the device will support Netgen nCloud Core features (IPTV, Broadcast TV, Pay TV and PVR functions) and nCloud Advances features (Broadcast to 4/6 screens, download to own, download to go, multimedia NAS and convert media to mobile). You’ll also be able to play games (Gameloft) and do video conferencing via Skype. Their software platform (nCloud) is […]

HbbTV (Hybrid Broadcast Broadband TV) is a new European standard for web-based smart TV applications for TVs and set-top boxes.  Services and applications delivered via HbbTV include traditional broadcast TV channels, catch-up services, video-on-demand, EPG, interactive advertising, personalisation, voting, games, social networking and other multimedia applications. The latest version of the HbbTV specification is 1.1.1 and can normally be downloaded after registering on ETSI website. The official nomenclature of the specification is ETSI TS 102 796. It is also directly available at the following link – http://www.etsi.org/deliver/etsi_ts/102700_102799/102796/01.01.01_60/ts_102796v010101p.pdf The HbbTV specification is based on existing standards and web technologies including OIPF (Open IPTV Forum), CEA, DVB and W3C. HbbTV Specifications specifically makes use of the following standards: CEA-2014 – Web-based Protocol and Framework for Remote User Interface on UPnP Networks and the Internet (Web4CE), also known as CE-HTML. Open IPTV Forum Release 1 Volume 5 – Declarative Application Environment of the Open IPTV Forum. TS 102 809 (aka DVB Blue Book […]