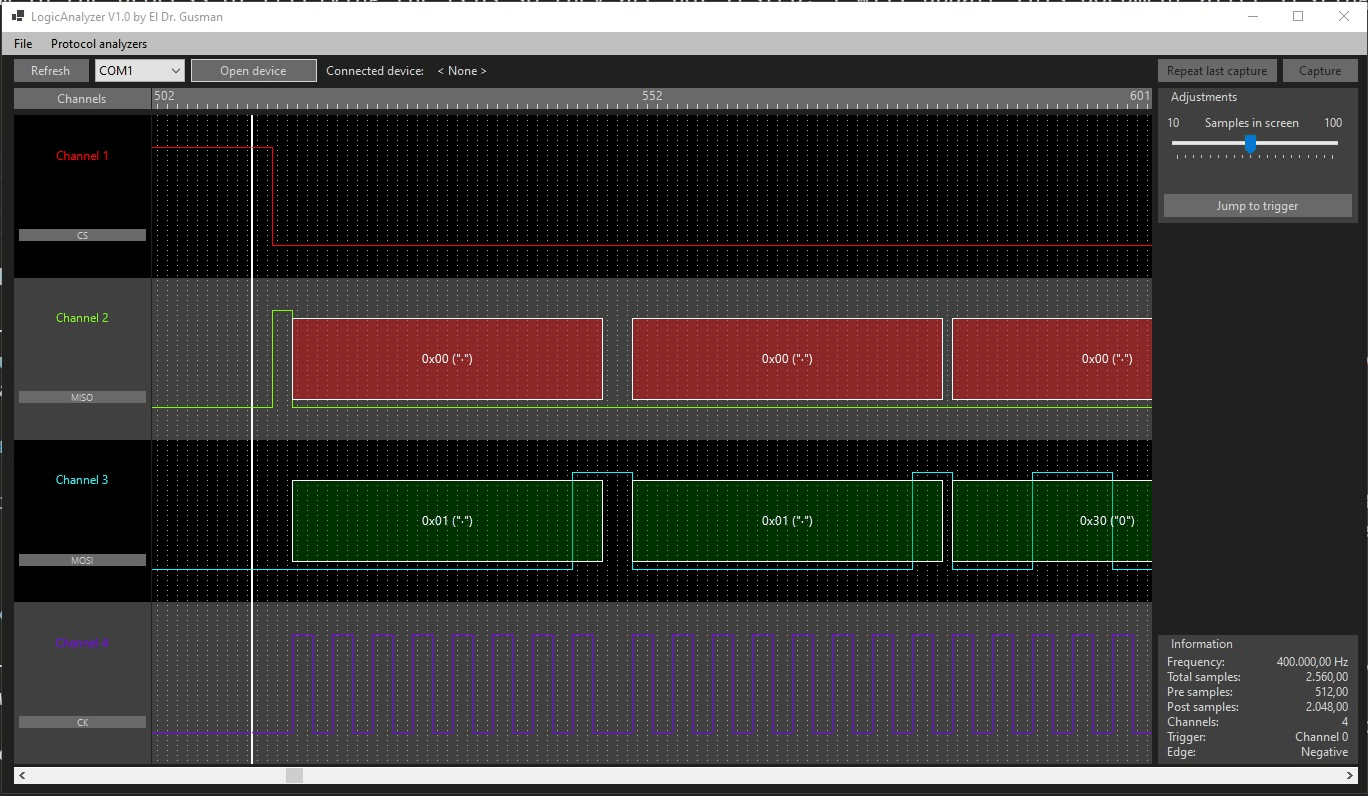 MCU boards, including the $1.5 BluePill board, have been used as cheap logic analyzers for years, notably with Sigrok open-source software. So it should come as no surprise the $4 Raspberry Pi Pico board can also be used as a logic analyzer, with one developer claiming it can deliver 100 Msps, or the performance obtained with a 1.6 GHz CPU, thanks to the PIOs from the Raspberry Pi RP2040. Hackaday reported about a Sigrok driver for the Pico last March, but the topic was brought to our attention via a post on Hackster.io about an open-source Windows program developed from scratch to transform the Raspberry Pi Pico board into a logic analyzer capable of 100 Msps. Agustín Gimenez Bernad (aka gusmanb)’s LogicAnalyzer program offers up to 24 digital channels, pre, and post-trigger sampling, edge trigger and pattern trigger up to 16 bits. It can work with the Raspberry Pi Pico […] 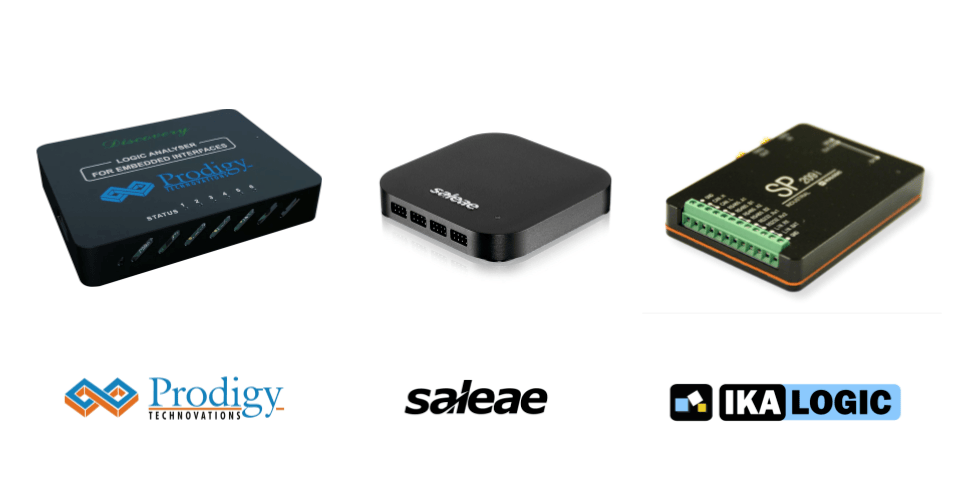 Building an embedded system requires multiple devices to communicate with the central processor, generally through an SPI or I2C bus. If your system is quite complex and things don’t work out as expected, then a Logic Analyzer might save your day. So, choosing the correct Logic Analyzer is critical to a successful project. This article gives a PC-based Logic Analyzers comparison, and we’ll compare products from three companies: Prodigy Technovations, Saleae, and Ikalogic. Factors to keep in mind while selecting a Logic Analyzer Before we dive into the comparison part, we should be aware of a few points based on which we’ll compare them. Logic analyzers come with a certain number of channels. The higher the number of channels is, the costlier is the product. So, select the number of channels appropriately depending on the size of your project. Several other technical specifications should also be considered, which are listed […] 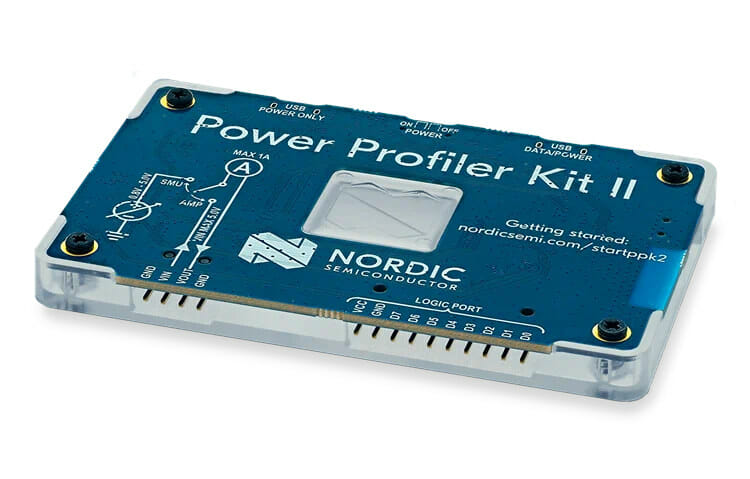 If you’re developing battery-powered products it’s important to optimize your application to consume as little power as possible to extend battery life. As we’ve seen with Qoitech Otii Developer Tool, getting the right tool for development can help developers work more efficiently, and save countless man hours. If you’re specifically working on products based on Nordic Semi nRF51, nRF52, nRF53 or nRF91 wireless chips, the company has just announced the Power Profiler Kit II (PPK2) that enables easy and affordable power measurement of average and dynamic power consumption in embedded solutions based on the aforementioned wireless SoC’s/SiP’s. Power Profiler Kit II key features: 200nA to 1A measurement range Resolution varies between 100nA and 1mA depending on the measurement range Instantaneous and average current measurement for all Nordic DKs, in addition to custom HW Ampere meter and source modes Built-in programmable regulator with a 0.8V to 5V output range and up […] 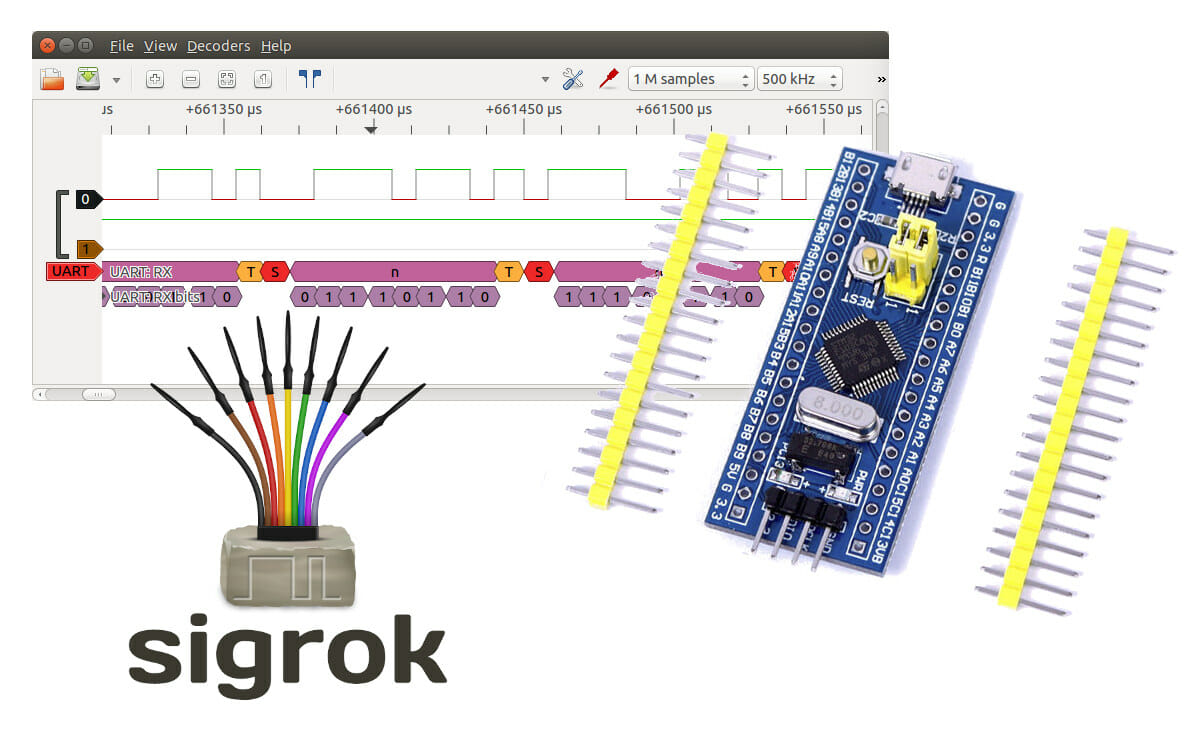 “Blue Pill” is a popular STM32 development board thanks to its low cost – now as low as $1.50 on Aliexpress – and Arduino compatibility via the STM32duino project. People have created all sorts of projects around the tiny STM32 board, but I find Mark (aka thanks4opensource) buck50 test and measurement firmware very interesting as it turns the Blue Pill board into a logic analyzer compatible with the open-source Sigrok command-line tool and PulseView GUI. Mark explains the firmware is still at the beta stage, so bugs will most likely have to be fixed. Nevertheless, Buck50 firmware should enable the following key features on the Blue Pill board: 8 channel, 6+ MHz logic analyzer Approx. 5K sample buffer depth Samples stored only at signal edges for efficient memory usage Complex triggering via user-defined state machine supporting combinations of sequential (“A then B then C”) and logical-OR (“A or B or […] 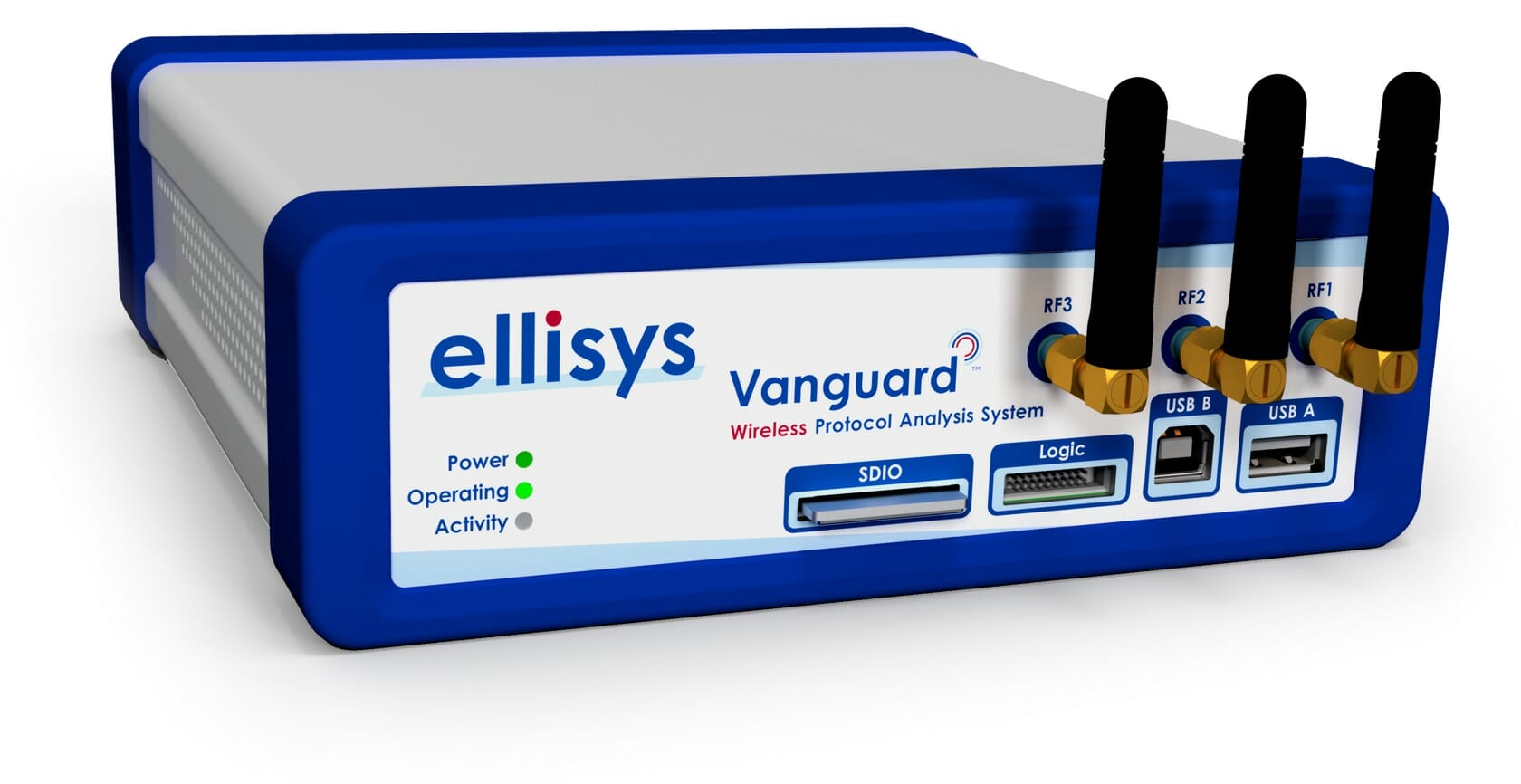 ARM TechCon is Arm’s premier industry event, where developers, analysts, and media gather from all around to hear the latest from the semiconductor giant. ARM TechCon 2019 has marked the 15th annual event hosted in San Jose. Arm TechCon 2019 showcased some of the industry’s best products and solutions in the market. Embedded Computing Design hosted a Best in Show Awards showing some of the most innovative solutions from the even. One of the notable award recipients is the Ellisys Bluetooth Vanguard Protocol Analysis System. Ellisys Bluetooth Vanguard Advanced All-in-One Bluetooth Analysis System is being regarded as the most advanced and comprehensive Bluetooth Protocol analyzer ever made mostly because it delivers new advances designed to ease the increasingly complex tasks of Bluetooth developers and many more. Building Bluetooth based applications can be a daunting challenge, especially when working with the wrong tools/equipment. Aside from Bluetooth wireless traffic debugging, other information […] 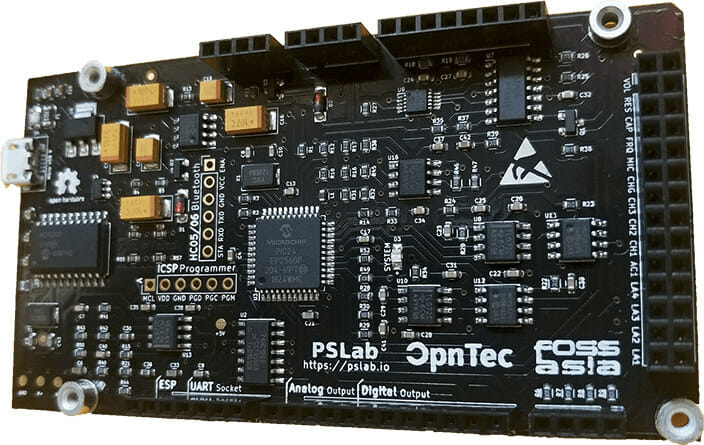 Pocket Science Lab (PSLab) is an open source hardware USB board that aims to bring electronics labs to the masses, as it can act as an oscilloscope, voltmeter, programmable voltage and current source, logic analyzer, or signal generator when connected to a PC or mobile phone. This is not professional equipment, and instead designed for STEM education. When we first covered the board in August, it was still in development, but I’ve just found it is now listed and in stock on Seeed Studio for $64.90. FOSSASIA and OpnTec are the organization behind the board’s development. Here’s a reminder of PSLab board main specifications: MCU – Microchip PIC24EP256GP204 16-bit microcontroller @ up to 70 MHz with 32KB SRAM, 256KB flash Wireless Connectivity Footprint for ESP8266 module (ESP-12E) for 802.11 b/g/n WiFi (on bottom of board) Bluetooth extension slot 4-Channel, up to 2MSPS Oscilloscope 12-bit Voltmeter. Programmable gain. Input ranges from […] 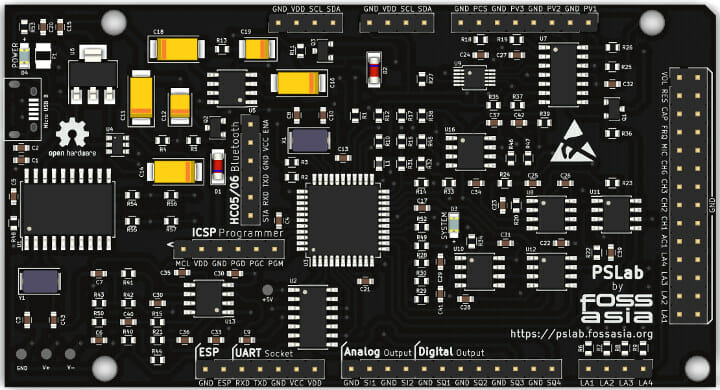 Last Saturday I created a virtual schedule for the Embedded Linux Conference Europe 2018 where I listed some of the sessions relevant to myself and hopefully regular readers of CNX Software, but due to scheduling conflicts one talk did not make it to the list: “Pocket Science Lab – An Open Source Hardware for Electronics Teaching & Learning” by FOSSASIA. The project is also referred to as PSLab, and aims to  “create an Open Source hardware device that can be used for experiments by teachers, students, and citizen scientists to learn and teach electronics”. It looks interesting enough so let’s have a closer look. The project is inspired by the earlier expEYES project that combines with Raspberry Pi or other Linux platform to create an electronic labs, and the work by the Open Science Hardware community. PSLab key features and specifications: MCU – Microchip PIC24EP256GP204 16-bit microcontroller @ up to […] 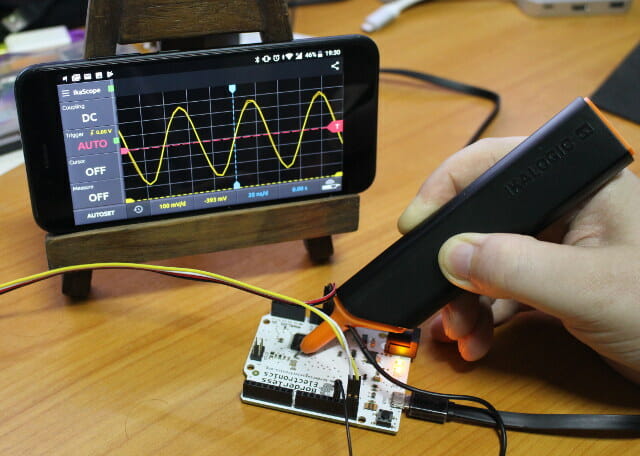 A couple of weeks ago, I received IkaScope WS200 pen-like WiFi oscilloscope, as well as ScanaQuad SQ50 USB logic analyzer & signal generator, and I’ve already checked out the hardware both both in a aforelinked unboxing post. I had also very shortly tried IkaScope with GOLE 10 mini PC, but just to showcase potential use case for a Windows 10 mini PC with an inclined touchscreen display. But at the time I did not really a proper measurement, as it was more to test the mini PC than the oscilloscope itself. I’ve now had time to test IkaScope desktop program and mobile app in respectively Ubuntu 16.04 and Android 8.0.0, as well as ScanaStudio for ScanaQuad USB device using Ubuntu 16.04 only, since there’s no mobile version of the program. While I’ll focus on Ubuntu and Android, most of the instructions will be valid for Window 10 and Mac OS X […]