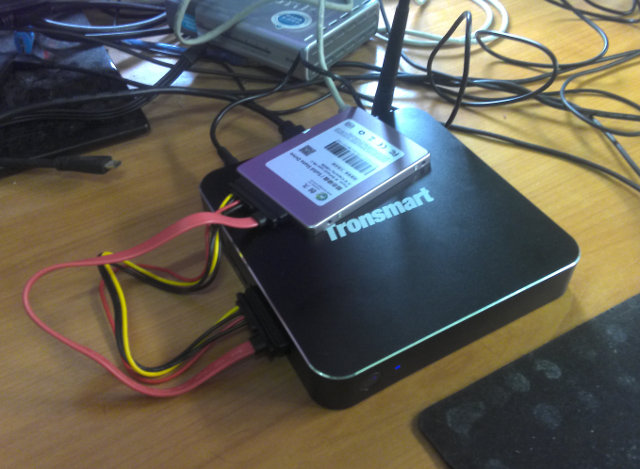 When Allwinner A80 TV boxes with SATA port were first release, some people hailed SATA performance, especially while seeking during video playback. But at the time, I was skeptical of these claims since Allwinner A80 SoC does not have have a SATA interface, so a USB to SATA bridge must be used, and the performance should be the same as USB hard drives. Unfortunately, I was unable to confirm these doubts, and test SATA performance in my review of Tronsmart Draco AW80 Meta, because at the time, I did not have any spare SATA hard drive or SSD. But since I’ve received CubieTruck Metal Case kit, which include a 120 GB SSD, so I could finally test the device SATA interface. This CHUANG JIU SSD achieves write and read speeds of respectively 8.7 MB/s & 50.5 MB/s for NTFS, and 36.31 MB/s & 179.45 MB/s for EXT-4 using CubieTruck with Debian 7.6, and Bonnie++ benchmark tool. NTFS is usually slower […]

Sine A80 OptimusBoard is the first ARM hardware that supports both USB 3.0 and Gigabit that I’ve ever owned, so I though it might be interesting to see what performance I could get with a USB 3.0 hard drive through the USB 3.0 OTG port of the board. For testing purpose, I bought a USB 3.0 OTG adapter on Ebay, but I did not look closely enough as it turned out to be only a USB 3.0 OTG to USB 2.0 female adapter capable of USB 2.0 speeds… Kind of useless item since you can plug a standard USB 2.0 OTG adapter into a USB 3.0 OTG receptacle. But I tried my hard drive anyway, and quickly realized write performance was very poor at 3 MB/s on the NTFS partition, whereas most other devices can handle at least15 MB/s, and usually over 25 MB/s. So I contacted Allwinner with this issue, and they were kind enough to look into it, […]