A lot have been covered at ARM Techcon 2010. I’ve blogged a few articles about ARM Techcon 2010, but there is a lot more to discover. A full set of documents and presentation slides shown at Techcon 2010 are available at http://vault.eetimes.com/armconference/proceedings/ The documents are divided in 2 main parts: Day 1: Chip Design Conference Day 2-3: System & Software Design Conference which are then divided into sub-directories with really (hmm) good names such as ATC-100, ATC-101… to ATC-165 so that everybody can clearly see what the subjects are. You’ll also have the Keynote and Industry addresses. Since this blog is more related to “System & Software Design” I’ve been through the pain of downloading all documents of this section and checking the subjects. You may do it for “Chip Design Conference” if you wish, I’m sure you’ll enjoy it. You’ll have one or two documents in each folder. If […] 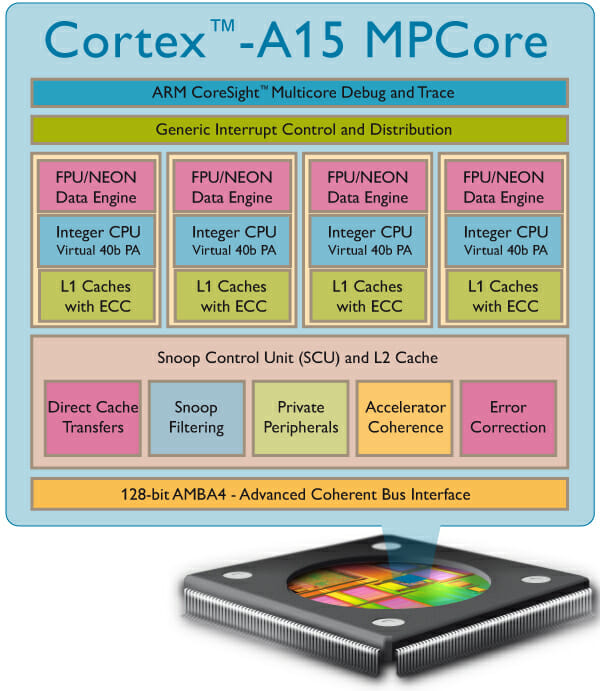 This year and next, many products will use processors based on ARM core cortex A8 and A9 tied-up with Mali 400 GPU. Those processors will run between 1 and 2 GHz. Earlier this month, ARM announced their new GPU Mali-T604 that will be used with Cortex A15 @ 1 to 2.5 GHz depending on the target application. The core design is ready, silicon foundries should be able to manufacture chips by the end of 2011 and products should be available for retail end of 2012 / beginning of 2013. ARM and their customer target the following applications for Cortex A15: Advanced Smartphones (1 to 1.5 GHz single or dual-core configurations) Mobile Computing (1 to 1.5 GHz single or dual-core configurations) High-end Digital Home Entertainment (1 to 2 GHz dual-core  or quad-core configurations) Wireless Infrastructure (1.5 to 2.5 GHz quad-core, octo-core or larger configurations) Low-power Servers (1.5 to 2.5 GHz quad-core […]

Nufront (新岸线) is a high tech company based in Beijing, dedicated to wireless broadband communication and broadcast, IC design, video search and digital imaging technologies. Nufront showed off their “low-power high performance” mini-PC based on their new NuSmart 2816 chipset at ARM Techcon 2010. NuSmart 2816 is based on a dual-core Cortex-A9 @ 2GHz with Mali-400 GPU. They plan to sell the chip for around 30 USD and expect ARM-based mini-PC to sell for around 200 USD retail. You can download NuSmart 2816 Product Brief for further details. As you can see from the diagram below, NS2816 can support all features (Ethernet, Wifi, GPS, USB, I2S Audio, SATA II, MMC/SD support, VGA, HDMI or LCD video output) that are now expected in modern desktops or laptops. Video playback currently uses around 2 Watts (chip samples) and they target 1.5 Watt for video playback in the final release of their chipset […]

A few years ago, nobody would have considered using an embedded system to run a server. But now, with the advance of technology, more and more servers are running embedded systems from the lower end such as home-based NAS (Network Access Storage) to higher-end for data-centers, cloud computing, web 2.0… This is the higher-end that Marvell targets with its Quad Core ARM ARMADA XP MV78460 running at 1.6GHz with “16,600 DMIPS performance at less than 10 watts”. Please checkout Marvell ARMADA XP Product Brief for further details. The main selling point of such solution is the power consumption compared to traditional Intel x86 based servers. According to Marvell, 50% of the cost of running a data-center is the electricity bill to run the server and especially to cool the room with air-conditioners. So let’s do a little exercise. Let’s take the estimated power consumption of Google data-center in Oregon that […]

Samsung recently showed off its dual-core Cortex-A9 Orion featuring quad-core Mali-400 GPU at Techcron 2010. The Samsung Orion (model name: S5PV310XH) will run at 1GHz (this frequency might be increased later on: I’ve read 1.2 GHz, 1.5GHz or even up to 2 GHz.) and use 45nm lower power manufacturing technology. Samsung already have a BSP using Linaro kernel and the development board having the following characteristics: Samsung Orion SoC Low power audio subsystem Embedded GPS 2D Graphics Acceleration TFT 24-bit true color LCD Controller MALI-400 3D Graphics TV-out and HDMI interface support Multi-format codec up to 1080p @ 30fps The device would runs Android on top of Linaro kernel which takes care of all the low level stuffs. If you are interested in developing for this platform, you can already download and play around with Linaro 10.11 which already supports Cortex A8 and A9 platforms. The Samsung Orion is rumored […]

Linaro is a Not For Profit (NFP) engineering organisation that works on Linux based open source software and tools. The organisation focuses on the ARM platform, mainly ARM v7A architecture, for example ARM Cortex-A8 or dual-core Cortex-A9 processors and is sponsored by ARM, Freescale, IBM, Samsung, ST-Ericsson, and Texas Instruments. The purpose of Linaro is to reduce the number of different Linux kernel for the ARM platform. They plan on releasing tools and Linux kernel every 6 months. And after about 6 months of existence, with around  80 engineering staff, they managed to release their first public version:  Linaro-10.11 on the 10th of November for TI OMAP4 Panda Board, IGEPv2, Freescale iMX51 and ST-E U8500 platforms. This release is based on Linux 2.6.35 kernel, GCC 4.4 toolchain and uBoot 2010.09. They released Linux 10.11 source code and tools, the hardware packs and the build instructions. Linaro also planned several technical […]