This year and next, many products will use processors based on ARM core cortex A8 and A9 tied-up with Mali 400 GPU. Those processors will run between 1 and 2 GHz.

Earlier this month, ARM announced their new GPU Mali-T604 that will be used with Cortex A15 @ 1 to 2.5 GHz depending on the target application. The core design is ready, silicon foundries should be able to manufacture chips by the end of 2011 and products should be available for retail end of 2012 / beginning of 2013.

ARM and their customer target the following applications for Cortex A15:

Here’s the block diagram of Cortex A15. 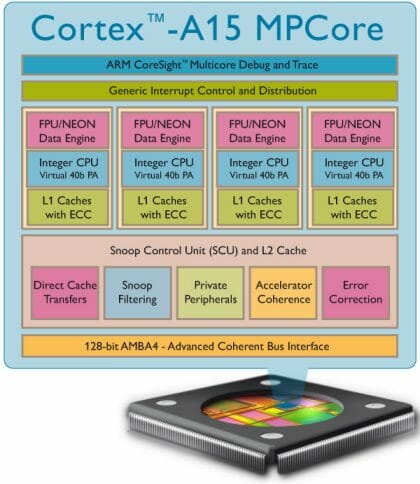 For smartphones, mobile computing and digital home entertainment, Cortex A15 is likely to be in conjunction with ARM GPU Mali T604. ARM promises very high 3D performance with 300 times less power consumption than PC’s graphics cards and better Augmented Reality applications (Image recognition). Mali T6054 will be up to 5 times faster than current Mali GPU. They also expect Mali T604 to be leveraged for GPGPU (General Purpose computing on CPU), where the GPU help the CPU with computing intensive tasks. WebGL – 3D support for HTML5 –  is such application that will be optimized for Mali T-604 and provide much nicer and smoother web browsing experience. 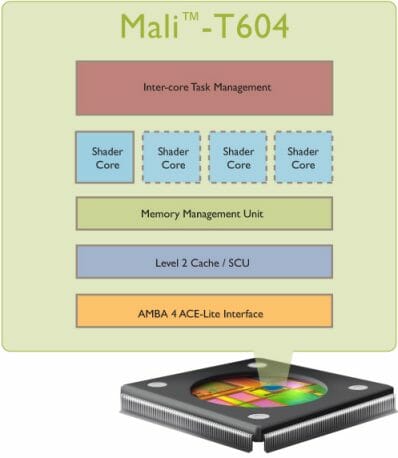 Linaro kernel, drivers and tools will most likely be the preferred SDK for those processors as it was seen in many Booth at Techcon 2010 and there seem to be a lot of support for it.