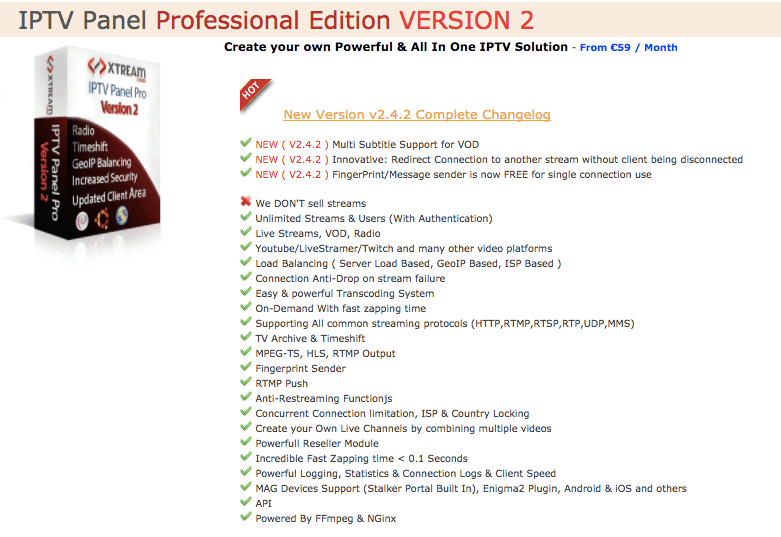 This is the third part of Xtream-Codes IPTV Panel review. IPTV Panel Professional Edition is a software to build your own IPTV Server from scratch. It supports all common Streaming Protocols as an Input and it is powered by FFmpeg & nginx. If you have not done so already, you may consider reading the first two parts: Review of Xtream-Codes IPTV Panel Professional Edition – Part 1: Introduction, Initial Setup, Adding Streams… Xtream Codes IPTV Panel Review – Part 2: Movie Data Editing, Security, Resellers, Users and Pricing Management Here are the major changes since Part 2: And part of the company’s announcement of the release: Why choose IPTV Panel Pro? IPTV Panel is powered by many Open Source Tools. These are only few reasons why we believe our software is different from our competitors: Stability: Our software is powered by FFmpeg to do the Restreaming & Transcoding of your streams. […] Netgem, a company specializing in Connected TV & Home, has sent a press release about profit growth, and two new “innovations int its smart home roadmap” with voice control with Amazon, and SoundBox, a connected speaker which embeds set-top box technology. Netgem does not sell directly to consumers, but instead sell its products and solutions to service providers, and they have not provided a great deal of technical details. But we still know the company has improved Netgem Home Platform, a cloud service allowing the deployment and management of multi-screen features, content discoverability, with support for multi-room, multi-source music service through technology from Voxtok. SoundBox will then offer both video and audio service, and be controlled by voice using Amazon Alexa. The SoundBox will be customized for each Telco to adapt to the needs of local markets. A few more details may eventually surfaced on Netgem’s SoundBox product’s page. They’ll […] 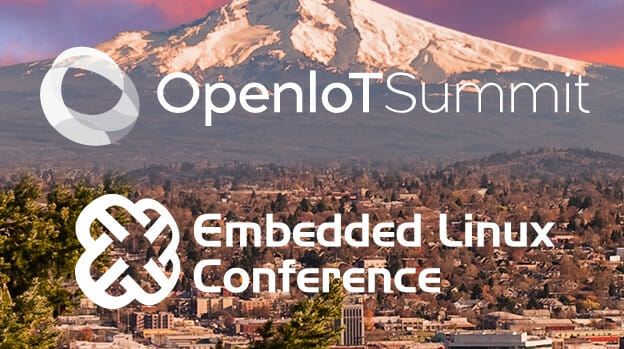 The Embedded Linux Conference 2017 and the OpenIoT Summit 2017 will take place earlier than last year, on February  20 – 23, 2017 in Portland, Oregon, USA. This will be the 12th year for ELC, where kernel & system developers, userspace developers, and product vendors meet and collaborate. The schedule has been posted on the Linux Foundation website, and whether you’re going to attend or not, it’s always informative to check out the topics. So as usual, I’ll make a virtual schedule for all 5 days. Monday, February 20 For the first day, the selection is easy, as choices are limited, and the official first day it actually on Tuesday. You can either attend a full-day paid training sessions entitled “Building A Low Powered Smart Appliance Workshop“, and the only session that day: 14:30 – 15:20 – Over-the-air (OTA) Software Updates without Downtime or Service Disruption, by Alfred Bratterud, IncludeOS […] 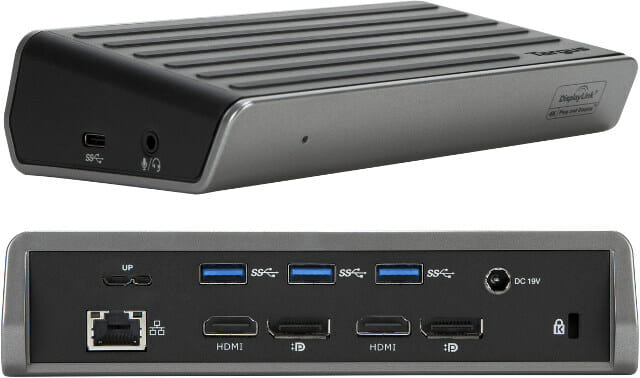 USB type C connectors are becoming more and more common and beside transmitting data and power, some devices also support video over USB which requires a dock, and if you have some serious display requirements, Targus docking stations over USB-C or USB 3.0 might be what you are looking for, as they support two 4K monitors at the same time thanks to their multiple HDMI 2.0, DisplayPort 1.2a and DVI outputs, and you can even daisy-chain three docking stations over USB 3.0 type A cables in order to control six 4K monitors from one USB port. Targus has several models, but let’s check out the specifications of their “USB 3.0 DV4K DOCK160USZ dock station” pictured above: Chipset – DisplayLink DL-6950 Video Output Ports – 2x HDMI 2.0 ports, 2x DisplayPort 1.2a ports supporting up to dual 4K Ultra HD video @ 4096×2160 60Hz 24 bpp Audio – 1x 3.5 mm […]

FOSDEM (Free and Open Source Software Developers’ European Meeting) is a 2-day free event for software developers to meet, share ideas and collaborate that happens on the first week-end of February, meaning it will take place on February 4 & 5, 2017 this year. FOSDEM 2017 will features 608 speakers, 653 events, and 54 tracks, with 6 main tracks namely: Architectures, Building, Cloud, Documentation, Miscellaneous, and Security & Encryption. I won’t be there, but it’s always interesting to look at the schedule, and I made my own virtual schedule focusing especially on talks from “Embedded, mobile and automotive” and “Internet of Things” devrooms. Saturday 4, 2017 11:00 – 11:25 – Does your coffee machine speaks Bocce; Teach your IoT thing to speak Modbus and it will not stop talking, by Yaacov Zamir There are many IoT dashboards out on the web, most will require network connection to a server far […]

Dear readers, after part 1 of Xtream Codes Panel v.2.2.0 EVO review, here is part 2. I tried hard to get all in two parts, but “to be exhaustive” there will also have to be a part 3… Movie Editing Section As we can see, it’s only possible to assign a movie into a single category, a SELECT BOUQUET Option under the Category would be more then useful. So while Movie Editor Section is useful right now, it still needs improvement. Also taking each movie by hand for editing, after, for example, a Main server crash or changing the Main, is really something, a waste of time. Some of the issues / possible improvements include: No mass edit of movies to bouquets If changing the category of a movie, I found no working method to change in a bulk.. Even if I tried to delete the “content” of a bouquet, […] 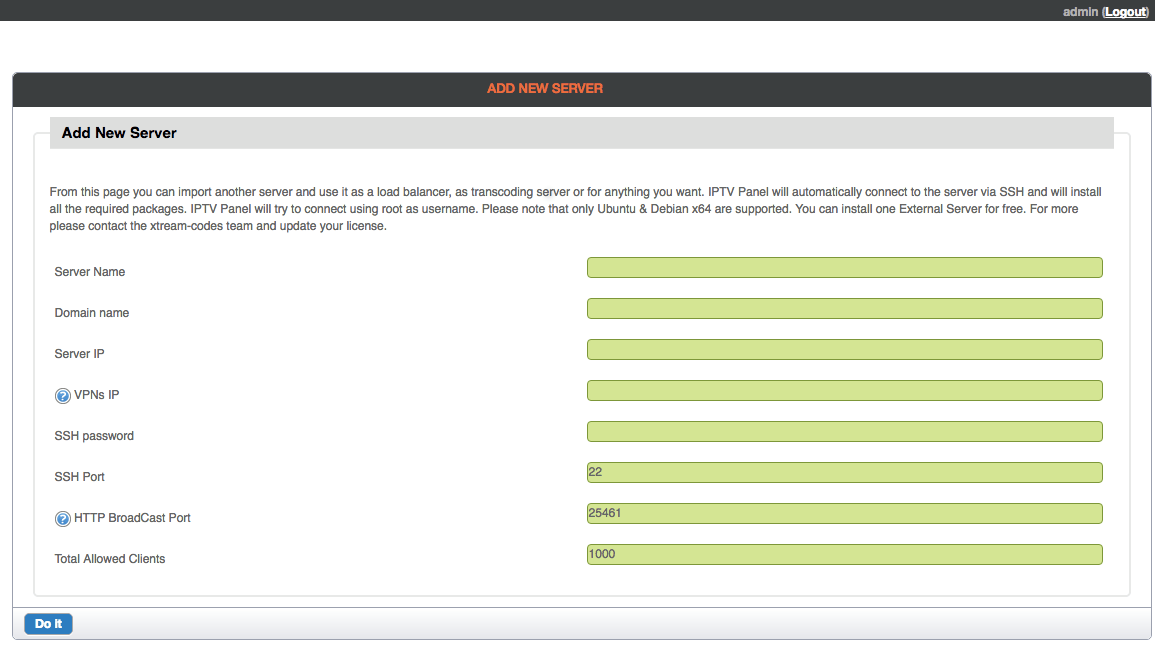 Today I’ll start the review of one of the streaming software available on the market, with version 2.2.0 EVO of IPTV Panel Professional Edition developed by Xtream-codes. The Software is mainly used for the so-called IPTV broadcasting, but also with great potential for all kind of other content delivery applications such as audio and business streaming, cloud video transcoding, and all other kind of global streams. What is IPTV? Wikipedia definition: Internet Protocol television (IPTV) is a system through which television services are delivered using the Internet protocol suite over a packet-switched network such as a LAN or the Internet, instead of being delivered through traditional terrestrial, satellite signal, and cable television formats. Unlike downloaded media, IPTV offers the ability to stream the media in smaller batches, directly from the source. As a result, a client media player can begin playing the data (such as a movie) before the entire […] 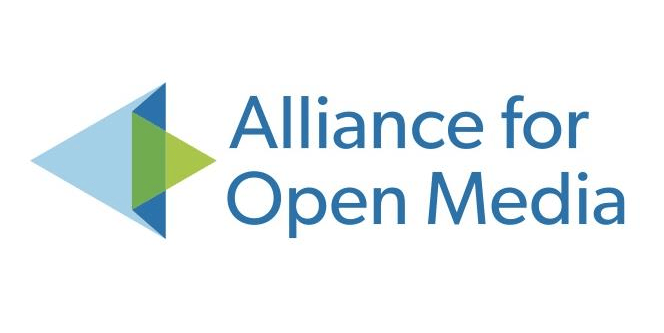 The Alliance for Open Media, or AOMedia, is a new non-profit organization founded in 2015 by Amazon, Cisco, Google, Intel Corporation, Microsoft, Mozilla, and Netflix, and more recently joined by AMD, ARM, and NVIDIA, whose first project is to develop AV1 royalty-free and open video codec and format to provide an alternative to H.265 / HEVC, and a successor to VP9. The project is a team effort combining teams working on Daala, Thor, and VP10 video codecs, and while AFAIK, AV1 specifications have not been released yet (target: Q1 2017), the organization has already released an early implementation of AV1 video decoder and encoder under the combination of an BSD-2 clause license and the Alliance for Open Media Patent License 1.0 , which can be found on googlesource.com. So I’ve had a quick my myself following the instructions, by first downloading one uncompressed YUV4MPEG sample: