Last year, we wrote about AV1 royalty-free open source video codec managed by the Alliance for Open Media (AOMedia), a non-profit organization with members such as Amazon, Cisco, Google, Intel, Microsoft, Mozilla, and other companies. 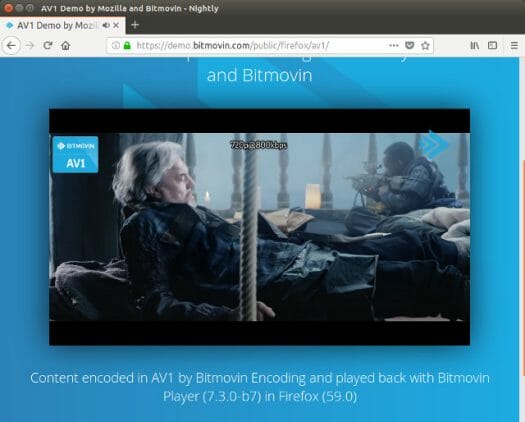 But thing are progressing nicely, and it’s now possible to stream AV1 video with HTML5 / in Firefox 59.0 (nightly) using Bitmovin Player. If you are using Ubuntu, you can also install Firefox nightly as follow:

Start it and visit the demo page to stream an AV1 MPEG-DASH/HLS stream in your web browser. It works from 360p @ 200 Kbps up to 720p @ 800 Kbps in my machine (still FX8350), and the image will freeze from time to time, but that’s a step in the right direction. The demo is supposed to handle up to 3 Mbps @ 1920×800 if your Internet bandwidth and computer can handle it.

Mozilla explains work still needs to be done, including on the encoder, which remain very slow as it takes around 150 seconds to encode one second of video on a standard desktop computer, and that’s why it is performed on Bitmovin cloud infrastructure instead, as the video appears to be encoded on the fly since the AV1 bitstream is still evolving (will be finalized by the end of the year), and both player and encoder need to use the same version. 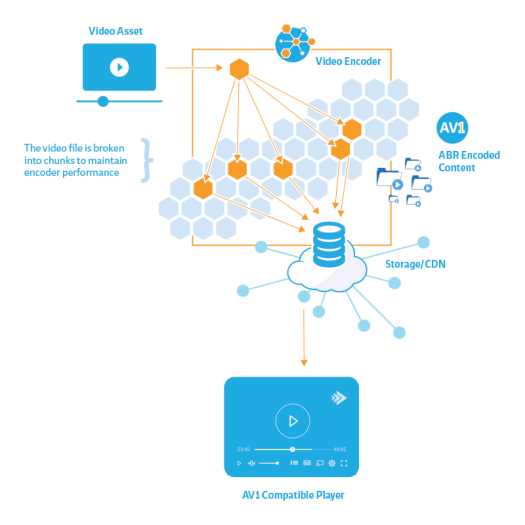 I could not find whether AV1 is supported by Chrome (unstable) yet, but since Google is a member of AOMedia, it will certainly come. I’d still expect to wait a few years before AV1 becomes “mainstream”.

i wonder if hollywood will use av1 in the future

The MPEG licensing authority has deep ties to Hollywood, the AoM was formed because companies were tired of the insane licensing requirements for H.265 as groups broke away from MPEG LA.

The purpose of AV1 is to kill off H.265 in the internet space, H.265 will still likely be used in TV/movie space.

I recommand to see video conference from Videolan Dev Day 2017, one conference was about AV1
So I’m not sure AV1 will be 35% better than H265
Do not forget VP9 was developped to be better than H265, now it is not and with H265 development/optimization it will be a real killer

I remember many years before, near of 10 years …

At the moment looks impractical 10-20% GPU usage and ~20% CPU usage at 200 kbps on EliteBook 8540w if going higher it’s dropping frames like crazy :D, Even vp9, h265 many tv boxes can play better than this old machine.