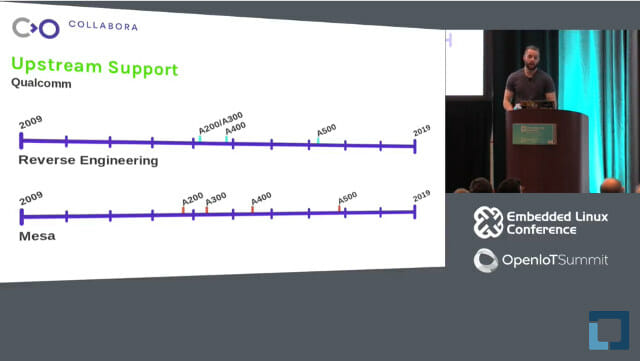 The Embedded Linux Confernce is on-going, and the Linux Foundation has been uploading videos about talks in a timely manner on YouTube. I checked out at RISC-V keynote yesterday, but today I’ve watched a talk by Robert Foss (his real name, not related to FOSS) from Collabora entitled “Progress in the Embedded GPU Ecosystem”, where he discusses open source software support in Linux/Mesa from companies and reverse-engineering support. The first part deals with the history of embedded GPU support, especially when it comes to company support. Intel was the first and offers very good support for their drivers, following by AMD who also is a good citizen. NVIDIA has the Nouveau driver but they did not really backed it up, and Tegra support is apparently sponsored by an aircraft supplier. Other companies have been slower to help, but Qualcomm has made progress since 2015 and now support all their hardware, […] 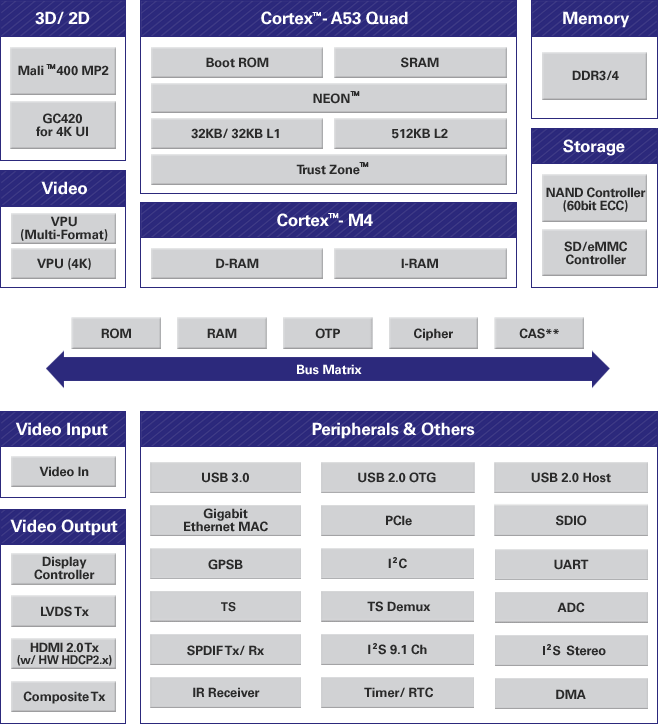 Telechips processors were often found in consumer devices such as Android tablets, mini PCs and TV Sticks a few years ago, but it’s been a while since I have seen a devices based on Telechips. So after seeing an automotive SoC from the company, I decided to visit the company website to check if they were still designing processors for the consumer market, and found TCC898x quad core Cortex A53 processor for “Smart Stick, IP-Client and STB with 4K 60fps decoding” with some interesting features. Telechips TCC898x SoC specifications: CPU- Quad core Cortex A53 processor with NEON, TrustZone, 32KB/32KB L1 cache and 512KB L2 cache MCU – Cortex-M4 micro-controller GPU 2D – Vivante GC420 composition processing core for 4K user interfaces 3D – ARM Mali-400MP2 VPU – Multi-format VPU and 4K VPU with HEVC and VP9 support Memory I/F – DDR3/4 Storage I/F – NAND controller (60-bit ECC), SD/eMMC controller […] 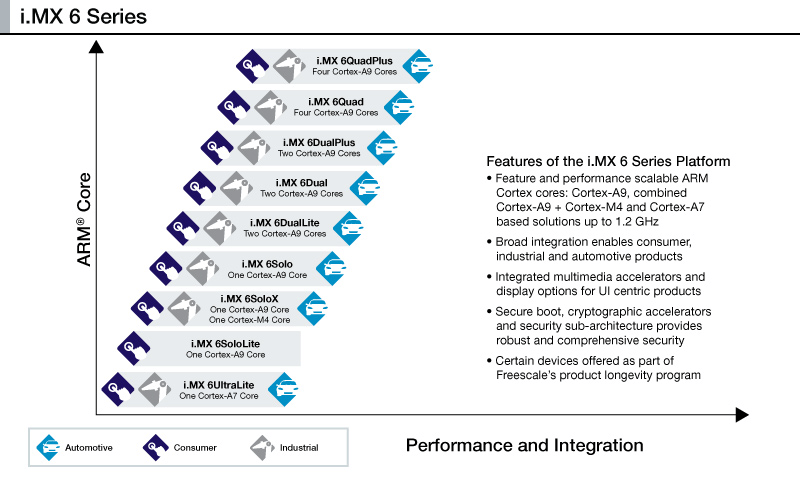 Freescale unveiled three new models for its i.MX 6 family processor for consumer, industrial and automotive markets in May. Two models are an upgrade to existing i.MX6 Quad and i.MX6 Dual processors, as the new i.MX 6QuadPlus and i.MX6DualPlus processors features four and two Cortex A9 cores, together with improved 2D and 3D GPUs delivering around 50% faster performance, an “optimized” SDRAM controller, more SRAM, and a prefetch and resolve engine. The third model, i.MX 6UltraLite, features a single ARM Cortex A7 core and hardware security, and targets applications such as electronic Point Of Sales (ePOS). That means there are now 9 i.MX6 processors, and today, I’ll focus on the two new “Plus” versions. Since they are based on the original i.MX6 Quad and i.MX6 Dual processors, the best way to have a look at these is to compare them to their predecessors. Features i.MX 6QuadPlus i.MX 6Quad i.MX 6DualPlus […] 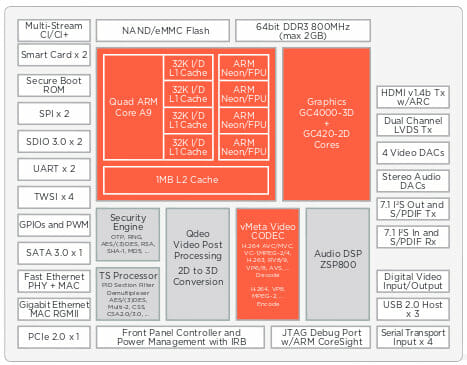 Marvell has just announced a new member of its ARMADA 1500 family of multimedia processors with ARMADA 1500 PRO 4K (88DE3214), a quad-core ARM processor (12K DMIPS), with a Vivante GC3000 GPU, and Qdeo video processor supporting 4K (UHD) output and HEVC 10-bit codec. These processors will be used in smart TVs, set-top boxes (STB), over-the-top (OTT) boxes, thin-client devices, etc.. Details are scarce, but ARMADA 1500 PRO 4K could be an evolution of the ARMADA 1500 PRO processors with four Cortex A9 cores as shown above, but with a different GPU, 4K and HEVC support, and possibly some extra features for DRM. The key features mentioned by the company are as follows: 3840×2160 (UHD) at 60 frames per second 10 bit HEVC Video Decode Up to 12K DMIPs Quad Core ARM CPU Multi-core GPU, 8 shader Vivante GC3000 GPU Robust Security Engine – Security features include Trusted Rendering Path […] 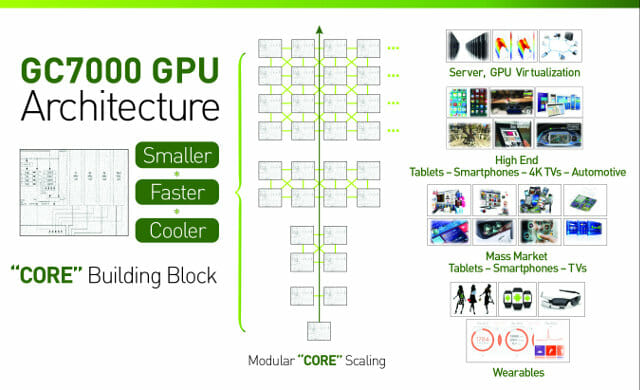 Earlier this month, Vivante Corporation has announced several silicon partner integrations (but no names given) of its GC7000 Series GPU IP into SoCs targeting wearables, mobile, automotive, and 4K TV products, and provided some more details about its GC7000 family which supports features such as OpenGL ES 3.1 API, and hardware TS/GS/CS (tessellation / geometry / compute shader) extensions for Android. According to the company, they key benefits of their GC7000 GPU IP can be summarized as follows: True GPU Scalability – GC7000 Series products support limited silicon area to match form factor and market requirements. Products can snap to grid starting at 3.0 mm2 (28 nm) for the smallest single GPU GC7000 instance and grow in simple modular fashion for high end implementations to achieve what the company’s claims to be the the industry’s best PPA (power/performance/area). Smallest Licensable OpenGL ES 3.1 Cores with Geometry, Tessellation, and Compute Shaders […]

GCW Zero is an open source handheld gaming console featuring Ingenic JZ4770 MIPS processor with Vivante GC860 GPU, 512MB RAM, 16GB internal storage, and a 3.5″ LCD with 320×240 pixels. The device runs Linux (OpenDingux) , and retro games and emulators. GCW Zero had a successful kickstarter campaign, and is now available in a few shops such as ThinkGeek (US), DragonBox (EU) for $150 / 125 Euros. Today, I’m writing about this console, not because of amazing specs, nor price, but because it could be the first  device with an embedded SoC that retails with an open source GPU driver. In September of this year, GCW Zero received a firmware update with Etnaviv GPU driver for Vivante GC860 adding support for 3D games via OpenGL ES support. The video below shows Quake 3 Arena running on the game console with the Etnaviv drivers. Lots of OpenGL ES1 and 2 features […] 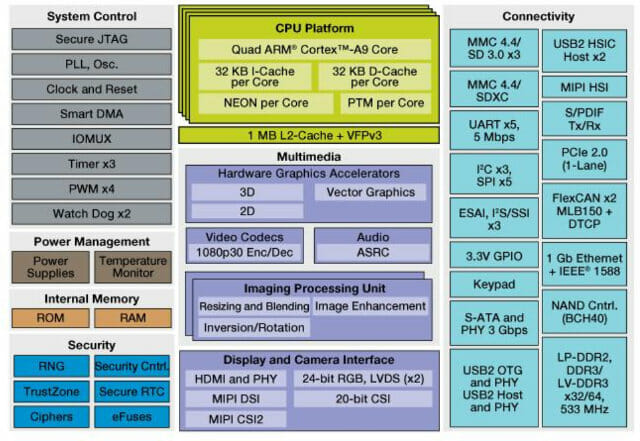 Many people seem to get confused with the actual function of GPUs used in embedded (ARM / MIPS) SoC, and I can often read comments similar to “with lima drivers we should get video decoding in XBMc soon”,  and I’ve just received any email reading “My main task is to build a full hd media player based on ffmpeg with hardware decoding acceleration for Linux. Is it possible with mali400mp4?”. So I’ve decided to write a short post about it to make things a bit more clear. Contrary to GPUs in the PC world, embedded GPUs only take care of 3D, and sometimes 2D graphics, and leave video encoding and/or decoding to another block called Video Processing Unit (VPU). There’s at least one exception with Broadcom Videocore IV GPU as found in the processor used in the Raspberry Pi that apparently takes care of 2D & 3D graphics as well […]

Most of the time, mobile GPU comparisons involve benchmarks such as Antutu, Nenamark 2, etc…, or people may consider which games will be able to run smoothly with a particular device, but we seldom compare image quality, for the simple reason it’s usually more difficult to achieve. YOUi Labs has just done that, however, by running the shader code below on several hardware platforms, mainly Android tablets, with the most common mobile GPUs, and used the results obtained with a  Desktop PC GPU, Nvidia Geforce GT 630M, has a reference.

Here are the results: The worst GPUs are Mali-400 MP4 in Exynos 4412 and Geforce ULP in Tegra 3, which can respectively only show 5 and 8 lines before degradation, and the top two GPUs are Qualcomm Adreno 225 in MSM8660A, and Vivante GC4000 in HiSilicon K3V2 processor. Imagination Technologies SGX544 and ARM Mali-T604 also provide decent results, but […]