Earlier this month, Vivante Corporation has announced several silicon partner integrations (but no names given) of its GC7000 Series GPU IP into SoCs targeting wearables, mobile, automotive, and 4K TV products, and provided some more details about its GC7000 family which supports features such as OpenGL ES 3.1 API, and hardware TS/GS/CS (tessellation / geometry / compute shader) extensions for Android. 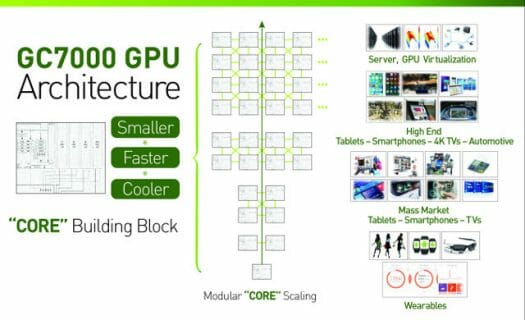 According to the company, they key benefits of their GC7000 GPU IP can be summarized as follows: 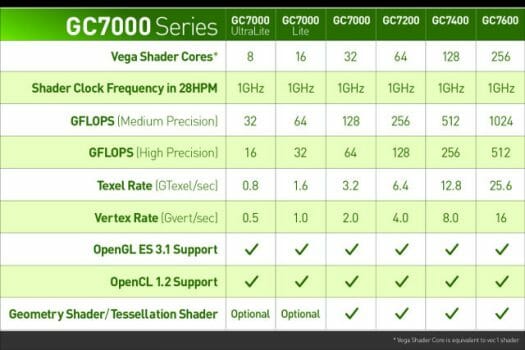 I never liked Vivante GPUs, but this one looks promising, more powerful than kepler, that’s something, wait & see

@natsu
Can I ask why you don’t like vivante gpu? Not enough power, design wins, architecture? Just curious.

@Harley
They may not have VPU / DSP IP at all. All I can see on their site is for 3G, GPGPU, Composition and Vector graphics.

The GPU vendors don’t typically do VPU/DSP IPs. Those tend to be implemented by the SoC vendor (ie. the companies that license the ARM CPU and whichever GPU).

And by implemented, I mean they either use an in house design for VPU/DSP/IPU/Audio, or license one separately.
In the future we will likely start seeing these blocks become more heterogeneous. It will be nice (and less confusing for everyone) when they do.

I’m sure there must be others, but for some reason(s), VPUs are never mentioned in the specs.

@Jean-Luc Aufranc (CNXSoft) Right. So for example, Actions ATM7029 uses Vivante GC1000 for graphics and then combines it with their own (supposedly, but who knows with this company…) Image processor and Video/Audio Encode/decode units, as the GC1000 only covers the graphics, and not video encoding or decoding. So Actions Semi merged them all onto the ARM SoC, or sometimes with a companion chip via SPI slave interface. As you can imagine, having chip manufacturers using different components in their SoCs is part of the reason why the kernel for ARM is/was such a mess as far as being generic. I… Read more »