After unveiling Google Nexus S and Android 2.3, Google lifted the lid on its reference notebook codenamed “Cr-48″ and provided updates about Chrome OS. This notebook features a 12.1” monitor and runs Chrome OS on an Intel platform.

The Cr-48 Chrome Notebook is only designed for Chrome OS pilot program and will be distributed free of charge to selected organization and users in the United States. Here’s an excerpt from Google Chrome OS website:

Each participant in the Pilot program will receive a Cr-48 Chrome notebook; in return, we’ll expect you to use it regularly and send us detailed feedback.

The Pilot program is open to individuals, businesses, schools, non-profits and developers based in the United States.

If you think you’ve got what it takes and live in the US, you can apply here.

Commercial notebooks using Chrome OS will be available mid-2011 from Acer and Samsung.

If you follow this blog, you may also remember that NuSoft is planning to port Chrome OS to NuSmart 2816 processor (ARM Cortex A9 @ 2GHZ) so that their customers can manufacture Chrome OS ARM-Based notebooks and netbooks based on their reference platform for a retail price around 200 USD.

On the software front, Google provided a status update for Chrome OS. Many key functions are still work in progress  including Google cloud print, which aims to enable local or remote printing without requiring printer drivers and a safe and convenient method for handling USB peripherals, etc..

According to Google engineers, Chrome OS still has numerous bugs and will have to be tuned for performance. Another new feature will be the ability to continue working on Google Docs offline. A good news since Google had previously discontinued Google Docs Offline support.

Chrome OS also has a new guest mode that lets users to go online without storing any history. Meanwhile, Sync is now available for bookmarks, settings, applications & themes, and synchronizing passwords is work in progress. They also emphasized the security features of Chrome OS calling  it “the most secure consumer OS ever” where all user data is heavily encrypted.

Google also announced that chrome OS would also have its own “marketplace” called “Chrome Web Store“. Even if you do not have Chrome OS, you can still try it out in with the Chrome Browser. 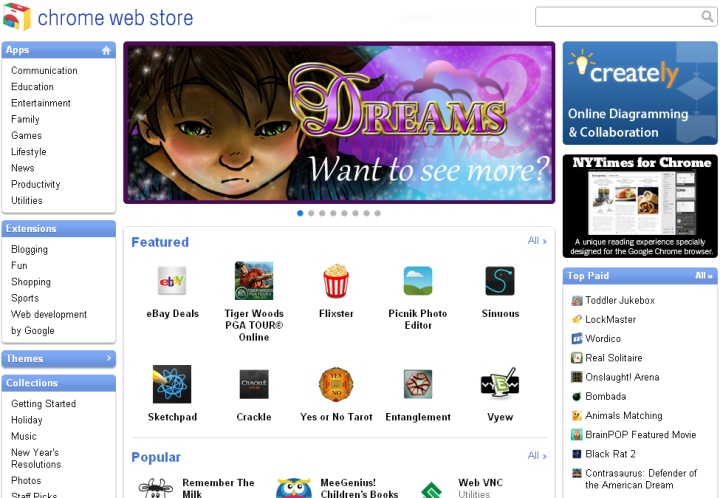 Recently, Eric Schmidt also confirmed that Google management expected Android being used in touch screen devices such as smartphones and tablets and Chrome OS in devices with an external keyboard such as laptops, netbooks or desktop computers. But what will happen will depend on the manufacturers. We may find some tablets with Chrome OS sooner than later for example.

Chromium OS  is open source and the source code can be checked out with git. If you’re a developer, I recommend you read Chromium OS Developer’s Guide. The recommended build OS is Ubuntu 10.04. You may also check the hardware list. If your hardware is listed then you can install and run Chrome OS without modifying the build.

Please also see Google Chrome OS vs Chromium OS if you not familiar with the differences between the two. Basically the former is for developers whereas the later if for EOM and will be shipped in products in 2011.