MIPS is currently working on the port of Android 3.0 to the MIPS architecture, here’s the press release: 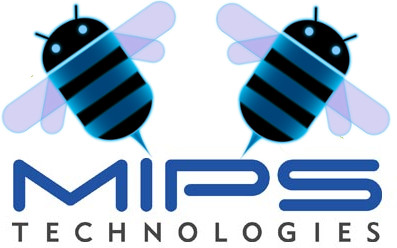 MIPS Technologies, Inc. (NASDAQ: MIPS), a leading provider of industry-standard processor architectures and cores for digital home, networking and mobile applications, announced today that it has official source access to AndroidTM 3.0 also known as “Honeycomb.” MIPS Technologies is now porting this newest version of Android to the MIPS® architecture. For MIPS licensees and their customers who want to produce Android compatible devices, this will accelerate development of tablets and Google TV products based on the MIPS architecture.

“The Android platform has been a game-changer for MIPS Technologies. When we first began working with Android, we focused on opportunities in devices beyond the mobile handset, and indeed we have already seen MIPS-Based televisions, set-top boxes and other products in the market based on Android. Android also opened the door for MIPS to enter the mobile market, and we recently showed the first MIPS-Based handsets and tablets. We are excited to continue our work with Android and enable our licensees to quickly bring to market next-generation products with Honeycomb,” said Art Swift, vice president of marketing and business development, MIPS Technologies.

As you can see, this is still work in progress and Honeycomb is not ready for MIPS yet, but we may find it used in tablets, laptop and set-top box powered by MIPS cores such as Ali M3701G set-top box silicon on chip.

Although currently MIPS is strong on the stb / media player market, it is way behind ARM in the mobile space, hopefully they will pick up some market share and bring more competition to benefit consumers.

For developers, if you are interested in Android for MIPS, you can have a look at MIPS’s developer website for further information.