Here’s yet another Android mini PC HDMI Stick. Equiso has started a KickStarter compaign to raise funds to complete development and manufacture the Equiso Smart TV, an Android mini PC based on Telechips TCC8925 Cortex A5 processor. 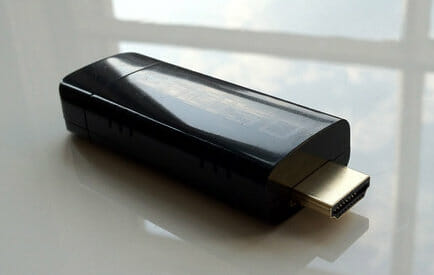 It looks very similar to CX-01 mini PC with Android 4.0 running on a TCC8925 processor, 512 MB RAM and the lack of a microSD card slot. The only hardware differences are that it includes 8GB internal storage (vs 4GB for CX-01), and it features an HDMI 1.4 port (vs 1.3 for others).

But the biggest difference is that it comes with a dual sided “magic” remote control with a “media player” side and qwerty keyboard side. The remote operates over a 2.4GHz wireless connection and features a 3-axis accelerometer and a 3-axis gyroscope. They mention that the remote uses a micro USB port for power, probably to recharge the remote battery, and we don’t actually need to connect it to some USB power source during use.

Software might also be better than the one that comes with Chinese versions, as the company claims that Softobiz, a software company with the same owner as Equiso, has worked thousands of hours to optimize the software for the platform. However, it’s unlikely you’ll be able to hack it, and run Linux on it as you can with AllWinner A10 devices such as MK802 mini PC, because Telechips usually makes it very difficult (NDA) to obtain GPL sources such as the Linux kernel, and the lack of microSD card slot makes it a pain for development. Having said that, the 3D model shows the internal storage might be a microSD card, which would make it more suitable for hacking (TBC). (By the way, if you have a Telechips device using one of the new TCC892X processors, you can try to request the GPL source code at [email protected]).

One interesting point is that they chose Cortex A5 over Cortex A9, because of overheating issues such as the ones many people complain about with Cortex A8 based mini PCs. No doubt price also came into play as well, as Telechips TCC8925 mini PCs are currently the cheapest on the market.

The package (Equiso Smart TV + Remote) is available for 69 USD on Kickstarter with free shipping in the US and $15 US for international destinations, and is expected to ship in August. If you don’t already have a wireless remote, that price is very competitive, and it would be difficult to purchase a mini PC + dual sided wireless remote for that price on Chinese sites, especially for US customers who get free shipping.

Via Liliputing and Slickdeals

So a new term is coined: YAAS. Yet Another Android Stick. 😉

I must say I don’t use my TV much anymore. I often watch stuff on my laptop: on demand, and interactive. So I wonder if a YAAS is useful for me.

@ Sander
I don’t really have a TV (it has become my monitor), so I’m not sure I can help here.
I use my desktop to watch most stuff, but when I’m on the bed I use my tablet, and if I still had a TV in the living room, I guess I would use one of those “YAAS” :).

I hope all effort sare aimed at bringing out Linux flash with good drivers. More Android isn’t helping. XBMC and other media software using proper Linux is the good way to go.

@ e8hffff
Telechips isn’t helpful, so for Linux and XBMC support AllWinner is basically the only solution now. Maybe AMLogic based mini PCs (e.g. ) could also be hacked, since AMLogic has a pretty good record for releasing open source software.
XBMC devs are working on a port for A10, but I’ve read they focus on an Android version instead of Linux.

@ e8hffff Personally I am also more interested in hardware running Linux, preferably Ubuntu. I have therefor have got a Raspi (running Debian). However, for a lot of people, Android offers a much more complete ecosystem: start it up, and everything is there: content, games and multimedia at your fingertips. Without rough edges or confusing choices like on Linux. So I do understand that the YAAS devices are on Android. And at the same time I wonder if people will be sitting on their coach using the YAAS and its remote. Maybe to see movies on demand. But browsing the… Read more »

They could have gone with new VIA A9, 30% faster then Allwinner A10 in same price. I think it is also more ‘open’ then telechips A5. Or may be Amlogic Dualcore A9 M3L / X etc.. Now they all must be ‘almost’ of same cost. These minipc / pconastick are nice but they all are on the boundary line of being an awesome stuff to a okyish hardware (in term of performance) . They need more dough. I know that you need to keep tab on price, But adding $5 for dualcore CPU and $2 for an extra GB of… Read more »

@Jean-Luc Aufranc (CNXSoft) Here is some very nice review / analysis of cross platform CPU’s. Do check it for sure.

@ max steve They chose Cortex A5 over Cortex A9 before of overheating issues. I did not go into details in my post, but they did try with Cortex A9 (single core?) but could not clock it above 600 Mhz without overheating issues, and found that a cortex A5 @ 1Ghz offered a better performance. So a dual core Cortex A9 running at 100% CPU on both core would probably overheat even more. Maybe somebody will find a clever way to handle power dissipation. For the remote, they don’t use a touchpad because they rely on the accelerometer / gyro… Read more »

@ max steve
Thank for the link. It’s interesting, although there are some issues with the benchmarking method: e.g. some use Linux 2.6, others Linux 3.0. For example, lots of optimization has gone into the kernel for OMAP4 (test with Linux 2.6) and the results could be significantly different.

cnxsoft :So a dual core Cortex A9 running at 100% CPU on both core would probably overheat even more. Maybe somebody will find a clever way to handle power dissipation.

Technology also impacts power consumption. As far as I know, AllWinner A10 uses 55nm process, while Amlogic AML8726-MX and Rockchip 3066 use 40nm.

Oups. It seems I can’t keep up with the specs of all the sticks coming out. So who has an AMLogic? I think Gocal and Geniatech…

cnxsoft :So a dual core Cortex A9 running at 100% CPU on both core would probably overheat even more. Maybe somebody will find a clever way to handle power dissipation.

Technology also impacts power consumption. As far as I know, AllWinner A10 uses 55nm process, while Amlogic AML8726-MX and Rockchip 3066 use 40nm.

Yes, you’re right, and for a given task, a dual core processor should actually consume less power, especially if it’s optimized for multi-cores. But in the worst case scenario with both cores at 100%, I suppose total power consumption, and hence heat should be higher.

cnxsoft : Dmitry : cnxsoft :So a dual core Cortex A9 running at 100% CPU on both core would probably overheat even more. Maybe somebody will find a clever way to handle power dissipation. Technology also impacts power consumption. As far as I know, AllWinner A10 uses 55nm process, while Amlogic AML8726-MX and Rockchip 3066 use 40nm. Yes, you’re right, and for a given task, a dual core processor should actually consume less power, especially if it’s optimized for multi-cores. But in the worst case scenario with both cores at 100%, I suppose total power consumption, and hence heat should… Read more »

Hello,
Al these models and other hdmi dongles are avaible at GOCAL-Europe.
Greetings,
Pascal