Mobile World Congress 2013 has just started. Nvidia is showcasing both a smartphone reference platform based on Nvidia Tegra 4i (Phoenix reference phone) and an unnamed tablet reference design with Tegra 4 during the event, and several Android benchmarks have been run on the platform including Antutu and Quadrant.

The results in the quad-core Cortex A15 Tegra 4 are really impressive with over 36,000 in AnTuTu and 16,000 in Quadrant, which are the best scores ever reported (by far) on those two benchmarks, as the top score in Antutu achieved with an overclocked Galaxy Note 2 is just over 27,000, a phone like the HTC One X scores around 5,600… 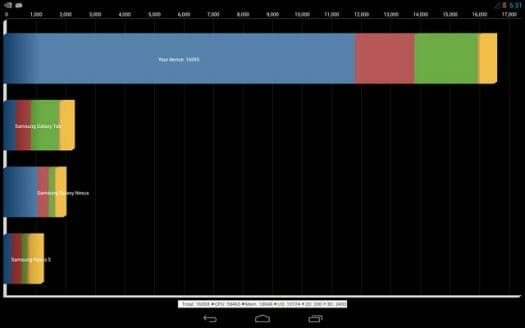 Android Police also ran two other benchmarks that can help to access web browsing performance: Vellamo (HTML5) and SunSpider. The Tegra 4 completes SunSpider in 494ms (vs 1124ms with HTC One and 208ms in my desktop PC), and scores 3300 in Vellamo HTML5 test.

With Cortex A15 SoCs, power consumption can always be an issue (e.g. Openbrix Zero board won’t boot if you just supply 10W), but Nvidia claims to have improved power consumption, and showed a slide comparing power consumption on a production phone powered by Tegra 4 to the Droid DNA (Qualcomm APQ8064). 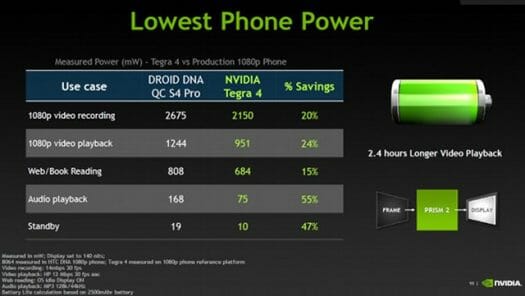 Video playback consumes around 1W, video recording 2W, and according to this slide, Tegra 4 outperforms Qualcomm Snapdragon S4 Pro by 15 to 55% when it comes to power consumption.