When you design hardware around Arduino or Raspberry Pi boards, most likely that not, the enclosures available on the market won’t be usable with your project, and you’ll have to design your own which may end up not quite looking as nice as you expected. Two Hornets, a startup based in the Netherlands, is trying to provide a solution with SliceCase, a modular and customizable casing system, that at first looks similar to some other enclosures like Pimoroni PiBow case. 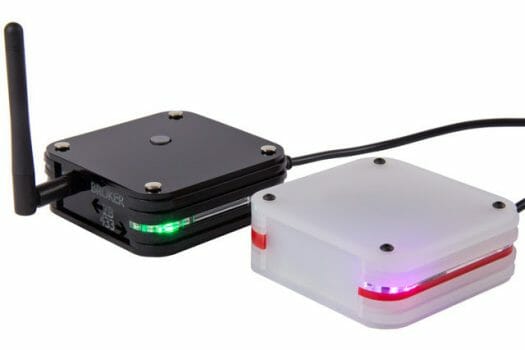 But there’s more than meets the eye, as SliceCase is composed of standard components, that allow you to build the casing around your hardware, and even order custom top covers and sides online. At first, they’ll focus on the most popular boards such as Arduino Standard and Mega boards, and the Raspberry Pi, but if this concept takes off more boards will be added.

The enclosure system is composed of bases, covers, different typed of sliced corners, thick and thin horizontal layers, as well as screws, nuts and spacers, which allow you to easily access to connectors, add your own boards, including veroboards, and more. All  parts are available in different colors (yellow, white, green, red or transparent), and you can mix them as you please.

The best way to clearly understand how the whole system work is to watch the video below (20 minutes) showing how the Arduino SliceCase is assembled, and what kind of arrangements are possible.

If the standard system does not quite match your needs, you’ll have be able to design and order your own bottom plates, covers or sides to match your hardware with their website. Your order will then be automatically produced with a laser cutting machine, and shipped to your door. I assume the website will be slicecase.com, but it is currently in development, and password-protected.

The company has launched a Kickstarter campaign to launch mass production. They currently have three main products: SCAR, SCAM, SCPI respectively standing for SliceCase for ARduino (Uno, Leonardo), SliceCase for Ardunio Mega (Due, Mega), and SliceCase for raspberry PI, with pledges ranging from 16 to 18 GBP ($29) with free shipping to the UK, and 7 GBP outside.

I’ve backed for 2 different cases, for Arduino Mega and RasberryPi. What I mainly like is the flexibility of his design–the case can accommodate a prototyping board (see video), and someone even commented about the possibility of having a battery compartment. I think now’s a good time for those interested to back and provide suggestions to influence/improve the design further, which is the great thing with Kickstarter projects. I’m not related to the creator in any way, just like to support good ideas when I see them.