The first Roku Streaming Stick was announced early 2012 with an HDMI/MHL port. It turns out MHL did not take as Roku and others, including myself, expected, and even today MHL is not a prominent feature in new TVs, and seldom listed in the specifications. So they’ve just announced a new Roku Streaming Stick, HDMI version, that can be powered via the USB port of your TV, or a standard USB power adapter. 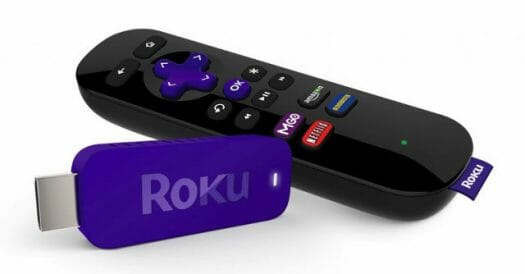 The processor and memory have not been disclosed, but we can assume it’s probably based on a Broadcom processor. The rest of the specs are as follows:

The device comes with a Wi-Fi remote with channel shortcut buttons, 2x AA batteries for the remote, a USB power cable and power adapter, as well as a Get started guide. The company claims you’ll have access to “1,200+ channels of movies, TV episodes, music, news, sports, kids’ shows and free programming streamed in up to 1080p HD video, plus a TV user interface featuring the beloved Roku Search”. If you’d rather use your smartphone to control the device, Roku mobile app for iOS and Android can be used instead of the Wi-Fi remote.

Roku Streaming Stick (HDMI version) is available for pre-order in the US for 49.99 from Roku website and online retails such as Amazon, with shipping expected in April. This HDMI dongle is available for $59.99 in Canada and £49.99 in the U.K. and in the Republic of Ireland, with ,I’d assume, a different list of channels.

Do you actually need a Roku device to use their service? Or are there Roku apps?

Roku has lots of channels, public and private. I use it to compliment my XBMC system. I also run Playon and Plex to really stretch it out, and they also play over XBMC. This is just a ‘catch-up’ move for Roku. It looks like they have the LT in a stick, and there’s no mention of having Roku 3 technology in the box. It would be icing on the cake if they’d run XBMC or you could at least cast it. Not sure why they don’t have the on-board power to do it. Aren’t most of these systems are just… Read more »

@Dave Have you got those on a single platform somehow?