Google announced Android TV and ADT-1 devkit last June, as the company wants to bring user-friendly Android user-experience to TVs, set-top boxes and game consoles. Mark Gregotski, head of the Linaro Digital Home Group (LHG), has provided a technical overview of Android TV during the on-going Linaro Connect US 2014. You find a summary of yesterday sessions on Linaro’s blog, and the even will last until Friday, where several demos will be showcased. 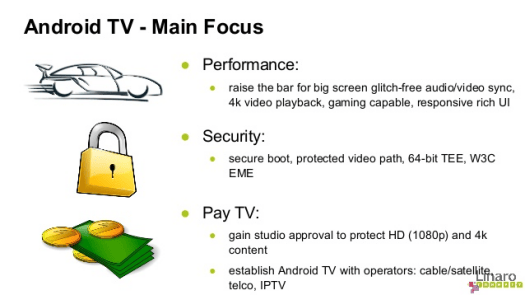 The TV input framework will gather several sources for example Cable, Satellite, IPTV, and Terrestrial video input into one single user interface, for example to display a unified EPG, where the user does not even need to be aware of the source. Android TV uses Exoplayer with support for MPEG DASH and Smooth Streaming, and you can find the source code on github. For PayTV, DRM will also be an important part of Android TV with support for Level 1 Widevine and Playready DRM.

The presentation slide are available here.