Recently I’ve seen some activity about tiny cameras for makers, including Linux based SinoVoIP BPI-D1 recording up to 720p30 videos, and an upcoming mini camera for VoCore Wi-Fi module. There’s now another project called OpenMV, and open source camera for machine vision applications based on STMicro STM32, recording up to VGA resolution at 20 fps, and controlled using Micro Python scripts. 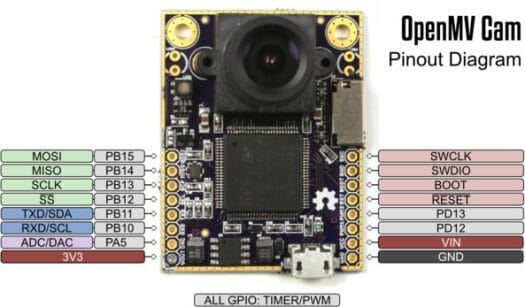 The camera can be controlled using (Micro) Python scripts. with the project’s OpenMV IDE, currently available on Windows and Linux, with a Mac OS port coming soon. It can be used in standalone mode, or interface with another board (Arduino) as slave or master. 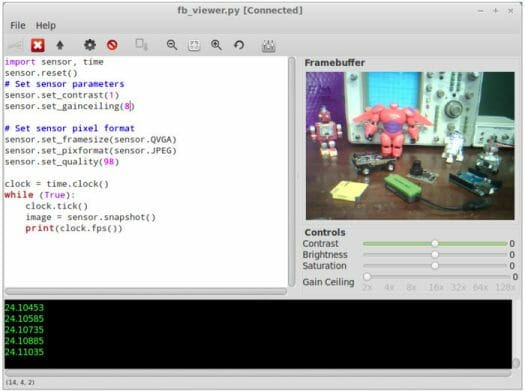 Some possible applications include:

What you would probably not do is use it as an action camera, or take your holiday shot, as performance is limited to VGA resolution, and lower whem machine vision algorithms kick in.

Many crowdfunding projects claim to be “open source” during funding, but have nothing to show up it. Contrary to many other projects, OpenMV  has already released firmware, the IDE, and as well as schematics and PCB layout in Cadsoft Eagle format, and 3D printer files for an enclosure on the project’s github repo.  Shields are also in the works (WiFi, LCD, and a low resolution infrared), but those will only be available after the Kickstarter campaign.

Bot Thoughts (that’s the name of the company) is looking to raise $50,000 on Kickstarter to fund mass production, and with 22 days to go, they are almost there, so the project will go ahead. A pledge of $55 will get you OpenMV shipped by USPS Priority/USPS Priority International to anywhere in the world, and you can also select perks with several OpenMV cameras to get a better deal. Delivery is scheduled for August 2015.

Thanks to Anthony for the tip.

For example, you can’t pull raw images from the Pixy’s SPI/USB. Instead it transmits the objects tracking data. Maybe OpenMV can do both?!

Also, does it work with other video software like OpenCV, pixython, etc? I always thought OpenCV could only work on a desktop (intel, full linux), but I think recently it’s been made to work on an embedded arm platform (BeagleBone).