Amlogic has just released Android 5.0 SDK for Amlogic S805, S802, and S812 processors on their OpenLinux website, but before you get too excited, this is only available people who have signed an SLA with the company, or somehow got a username/password to their git server. Although most people can’t access the SDK, it still means that popular Amlogic S8xx devices are likely to be upgraded to Android 5.0 in the weeks or months ahead. 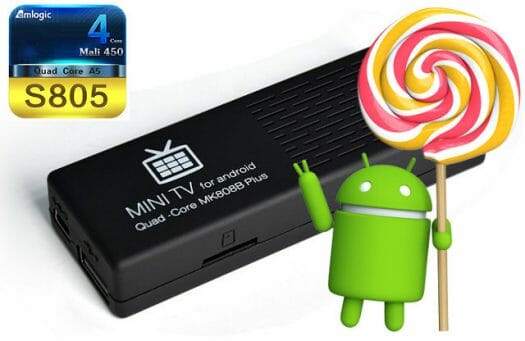 The company has not released any Android 5.0 SDK for older AML-8726M? processors however, so apart from WeTek Play, I would not expect any other Amlogic single or dual core devices to get a Lollipop treat.

If you own a MK808B Plus TV dongle, you don’t even need to wait, as WeTek ported Android 5.0, more exactly CyanogenMod 12, to the cheap HDMI TV Stick for evaluation, and since finally they don’t intend to design a device with Amlogic S805 processor, they released the image and instructions on XDA Developer Forums a few days ago.

This image is booting, and installing Google Mobile Services for the Play Store and other sertvice is easy, but a few things are not working yet:

Christian Troy, the developer who released the image, also mentioned “these two bugs won’t be fixed until AMLogic releases an updated SDK for Lollipop, where they will include the working libraries”. So that could be a new image for the fresh Amlogic SDK could be released soon and fix most issues on MK808B Plus Lollipop port.

Thanks to Stanislav for the tip about the new SDK.

There is a full image of linux for this device?
Or better, there is a linux SDK full?

Christian Troy also released the CM12 port for the MK808B Plus at FreakTab
http://www.freaktab.com/showthread.php?22326-ROM-5-0-2-Unofficial-CyanogenMOD-12-for-MK808B-Plus-WeTek-Gift

Still some work to be done but basically it works 🙂

i installed it on my 808b plus but there was no app draw no way a can get to the app i think it was a problem with the launcher i tried to install some apps from google search but i couldn’t. like i said it was a launcher problem there was no widgets or app draw it wouldent even let me click on the desktop to change backround picture

I have some updates on Amlogic Lollipop SDK… Their SDK is now based on Android 5.1.1. Officially supported platforms are S805, S812 and S905 (next gen soc, 64bit). They are still on 3.10.33 kernel, but kernel 3.14 is in development and probably will also support all mentioned platforms. Besides officially supported platforms, it runs just fine on S802 too if developer put some effort and create device tree for eg k200 project. All that means that every m8 device on market can run Lollipop (I admit I did not test it on MX, but I think WeTek guys made it… Read more »

@m][sko
I doubt. Aml is very strict when it comes to granting access to Lollipop. I will build lp 5.1.1 for odroid c1 when I catch some time. It’s time to do something with it, c1 is sitting on my desk collecting dust 🙂

Do you have any news about the DRM problem described in the article? I am running the CM12 rom by Christian Troy on my MK808B Plus, but unfortunately almost every streaming service does not work (because of broken drm).

Because you said there is a new SDK from Amlogic my question is if something has changed about this issue (did they include DRM in the new SDK?)?

hi, all links to download the rom dont work. do you have a working link to the rom? thanks, stefan

@Unixos
For the device itself, probably not, but you can check out Amlogic S805 source code: http://www.cnx-software.com/2015/11/19/amlogic-s905-source-code-published-linux-u-boot-mali-450-gpu-and-other-drivers/, and the work done by Hardkernel on ODROID-C1+ development board -> http://odroid.com/dokuwiki/doku.php?id=en:odroid-c1

Hi everyone, I’m working with a MXIII Android 5.1 Amlogic S812 Box. I want to add some feature to the kernel, but I have some difficulties with the Mali at the kernel and user side after recompiling and replacing the uImage and the drivers. I don’t have the Android SDK from amlogic, I requested the access though. I’m using the 3.10.61 kernel release from codesnake. I did the same process for the kit kat with a S805 chip and it worked well. Do you know if it is possible to do this without the SDK from amlogic?. Do you know… Read more »