While the newer Raspberry Pi A+, B+ and B2 boards feature the new 40-pin connector, the Raspberry Pi boards Model A and B have a 26-pin expansion header, but both are use to access GPIOs, UART, SPI, I2C and interface with external hardware, and many add-ons boards have been developed for the Raspberry Pi. But what if you’d like to use R-Pi add-ons board on your PC, or instead you are developing your own add-on board, but would like to do so directly on your PC for convenience? DonglePi is the answer.

It’s a small USB dongle with Atmel SAMD21 MCU and a 26-pin Raspberry Pi compatible header, that you could use connect to your Android/Linux/Windows PC to play with GPIO, I2C, SPI, Serial, PWM just like on a Raspberry Pi, and using RPi/GPIO or smbus Python libraries for programming.

The project is still in development, and so far most interfaces are working except PWM which needs to be worked on. The whole software and hardware (Eagle Schematics & PCB) are released under a Creative Commons CC BY-NC 4.0 license.

The hardware can not be purchased (yet), but you could also make a prototype with a breadboard, an Atmel SAMD21 development board, and Pi Cobler kit just like the developer (gbin) started with as shown below. 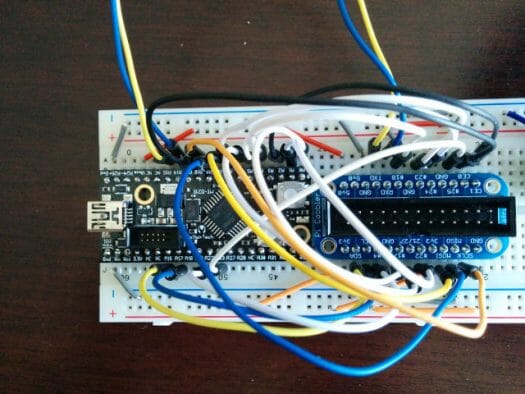 All connections, hardware and software are documented on github.

Sure kickstarter for you and another 2,3 people. U serious?

Seems like a waste of a cortex-m0 core. An $3 Arduino Micro running Firmata can be controlled from a PC/Laptop using the pyFirmata/pyMata client apis.

@Armer Firmata can be made to support I2C & SPI but one would have to modify the firmware (Non Standard Firmata). One can also use a custom serial parser programmed on the Arduino. This parser reads incoming serial commands from the PC, decodes them and then runs the appropriate function. With this functionality not only can an Arduino’s GPIO, ADC, PWM, I2C and SPI be controlled from the PC over the serial port, but one can also remotely control LCD, IR remote, Software Serials, Servos e.t.c. I’ve had quite a bit of success with this approach. The mbed library/boards already… Read more »