I’m eagerly waiting for the day when Ubuntu convergence becomes reality, and I can run Ubuntu on a smartphone which I can also use as desktop PC. But Canonical is not the only company working on convergence and Microsoft has announced Continuum for Phones as part of Windows 10, that will bring desktop mode and support for dual independent displays to next-generation Windows 10 phones. 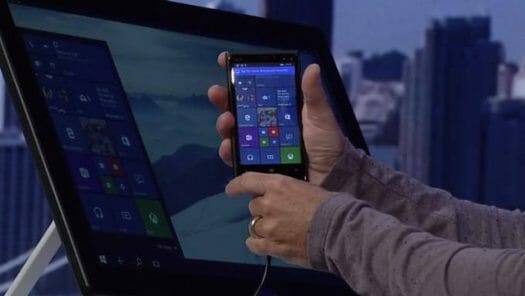 To switch a Windows 10 smartphone to desktop mode, you’ll simply need to connect it to a desktop display, and Bluetooth keyboard and mouse, and it will automatically switch to a standard Windows 10 desktop on the big screen where you’ll be able to run apps like Microsoft Office, and other Universal Windows apps, as if it was running on an actual PC or laptop.

The dual screen feature will allow you to check your emails on Outlook on a TV, while your kids watch a movie on the phone screen for instance, and you’ll also be able to answer a phone call without affecting your current work on the desktop. Microsoft also claims this is only possible on new hardware thanks to Qualcomm chips, which probably explains why Continuum won’t work on existing phones.

The requirement for “Universal Windows app” means only apps from the Windows store will run on the phone, and classic desktop app won’t run, until they’ve been ported and available from the Windows store, which overtime should be the case for most apps. If Continuum really works as promised, Microsoft Windows smartphone market share may rise significantly in the future, that is unless Android and iOS also have planned for desktop mode.