ITEAD Studio has done some good job with their Sonoff home automation devices based on Espressif ESP8266 WiSoC, as they are affordable, working as advertised with default firmware, and hackable with our own. The company has now added a new model, which may or may not be as useful, with Sonoff SC environmental monitor device that detects current temperature, humidity, light intensity, air quality, and sound levels, and sends the data to eWeLink app installed on your Android or iOS phone. 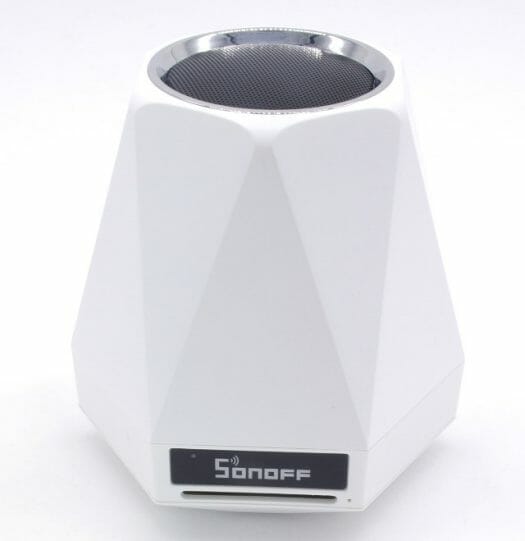 You may be thinking it can be used as a home assistant since it really looks like a speaker and include some sort of microphone, but the top of the device is probably used to let air and dust go through. 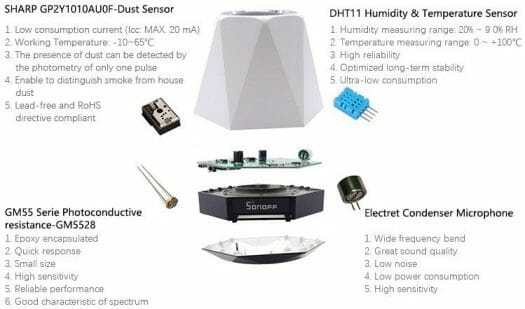 The default firmware and eWelink app also allows to set various smart scenes to trigger other devices, for example if air quality is too poor, Sonoff SC could turn on a fan connected to Sonoff wirelesss switch, or lights could be turned on when it becomes dark.

But you don’t have to use the default firmware if you don’t want too, as Sonoff SC’s ATMega328 controller can be programed through the Arduino IDE if you want to change the firmware, while ESP8266 is used for WiFi only. You’ll find the schematics (PDF) and Arduino code in the Wiki.

If you are interested, you can purchase Sonoff SC for $19.90 on ITEAD Studio website with shipping adding $7.33 to $17 depending on selected shipping method.

It has a DHT11 Sensor, with a 1 degree step; non so good for a real effective temperature control inside an house.
I’ve tried it, but after a while I migrated to the DHT22, it has 0.1 degree step, the temperature graph is really better.

using DHT11 makes it almost useless. SI7201 or BME280 would have been way better.

Using SHT10 or SHT15 is a good choice

The TI HDC1010 ought to be the obvious pick for any low cost device looking for an accurate temp/humidity sensor, as it’s cheap and quite accurate at plus/minus 0.2 degrees C.

DH11 funny, they could use at least dht22. $1 difference and a big step forward.

If I purchased a Sonoff, would it be a case of desoldering the Dht11 and replacing it with a Dht22 or would code also need to be changed as well?

It should not be difficult however, as the firmware source for Sonoff SC is provided.

Gaetano : after a while I migrated to the DHT22, it has 0.1 degree step, the temperature graph is really better. So you don’t care about temperatures but only about values that plot a nicer looking graph? The only thing I understood so far when comparing various sensors is that you shouldn’ trust them (simply use more than one and compare results). Does not only apply to external sensors but also to those integraded in ICs/SoCs. The problem with ‘nice looking graphs’ can be solved by averaging the numbers spitten out by sensors. But why? The purpose of such a… Read more »