Nextion displays are designed to be controlled by MCU boards with the user interface designed in Nextion Editor drag-and-drop tool. ITEAD Studio launched them in 2015, and I played with Nextion 2.4″ and 5.0″ models, but at the time, I found the Windows only Nextion Editor program not to be that user-friendly and inconvenient to use, as for example, UI designs do not automatically scale across all display sizes. The company is now back with a 7″ model, available with resistive or capacitive touch panel, and featuring an ARM7 processor exposing 8 GPIOs.

The display can work in standalone mode controlling external hardware through the 8 GPIOs, or connected to an MCU board over serial. You’ll find a few more technical details in the Wiki. The UI designed in Nextion Editor is stored in the flash memory or micro SD card, and the MCU board can receive / send commands to get user input/update the display. Nextion Editor is still a Windows only program, but if my memory serves me well, it can also work with Linux through Wine using a /dev/ttyUSB0 to COM1 redirect. 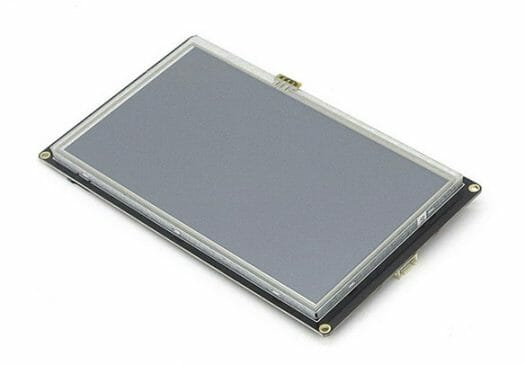