Capable Robot Components has launched its Crowd Supply campaign for the Programmable USB Hub in June of 2019. The hub is a feature rich and component rich USB hub that has a dev board built-in. The entire system is housed in an extruded aluminum case, with all the numbering and lettering and port attachments in brilliant white.  Control power and data flow, directly through the unit. The first 40 units are sold out. There seem to be good reasons why these USB Hubs sell out fast.  There was an in-depth article written on a similar hub some time ago.

Inside the enclosure is an array of functionality packed neatly onto a small board. There are 4x USB 2.0 ports that are High-Speed downstream ports and 1x upstream port, a 5th endpoint on the USB hub exposes 2 12C buses via Sparkfun Qwiic connectors, the UART and 2X GPIO. The input power is delivered to the unit by a locking Molex connector. Also, at the back of the unit is a USB port to reprogram and communicate with the MCU.

The power controls consist of:

This Programmable USB Hub is an open source device and can use MIT-licensed Python drivers to access, control, and program the Hub, as needed for a whole host of projects. There are a number of testing platforms that are compatible with the system, such as built-in IO expansion that allows for control or stimulate DUT (Device Under Test) or automate testing of embedded USB devices. The upstream port or the MCU USB port can be utilized to control, monitor or program the hub.

Some of the standout functions and features are:

The ATSAMD51 microcontroller configures the hub IC and can be reprogrammed to alter the behavior of the hub. The unit’s microcontroller ship with open source firmware, ready and waiting for a simple computer connection that allows editing of code through small files, instead of through drivers or reflashing of hardware.  The entire unit is ready for all those projects that have differing power and program needs. 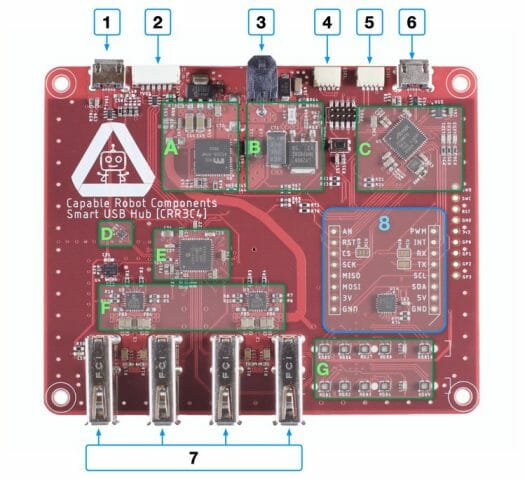 I have one question to creators of that abomination:
https://www.youtube.com/watch?v=168xpCqhWtI