The popularity of Raspberry Pico board powered by RP2040 microcontroller has made every reader wanting to know more about the board and chip. So today we will be talking about RP2040’s Programmable IOs, a feature that makes it different from most other microcontroller boards. 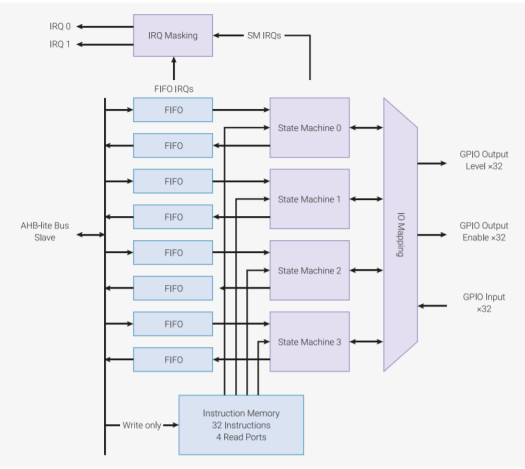 All the boards usually come with hardware support for digital communications protocols such as I2C, SPI, and UART. However, if you plan to use more of these interfaces than what is available on the board, you can use the programmable IOs provided in RP2040 microcontroller.

Well, this has more capabilities than one can think of. Let’s say you want to output a DPI video or “communicate with a serial device found on AliExpress” is now possible with Programmable I/O.  As the name says, ‘Programmable’ IO makes it clear that it can be programmed directly to support several interfaces including SD card interface, VGA output, and higher speed data transfer. Hang on! We have the most exciting part of the article coming up – ‘How to program these programmable I/Os to make your job easy’.

How do I get started with the RP2040 PIO programming?

If you plan to use Python to code, you only require a suitable editor (let’s say Thonny) and MicroPython installed on the development board. But in the case of C/C++, you require CMake file that tells the Pico SDK how to turn the C file into a binary application for an RP2040-based microcontroller board, as explained in our recent MicroPython and C tutorial for Raspberry Pi Pico.

The PIO Assembler parses a PIO source file and outputs the assembled version ready for inclusion in an RP2040 application. This includes the C and C++ applications built against the Pico SDK, and Python programs running on the RP2040 MicroPython port.

To get started with programming the state machine for your PIO application, there are three components for C/C++ based program.

More information about the assembly language instructions is available in the RP2040 datasheet.

To make it easier, we will look into the program of hello_world that blinks the onboard LED using the Programmable IOs and TX FIFO’s 32-bit data (PULL instructions).

The above C/C++ code blinks the LED with one complete cycle of  1 second. LED is programmed in such a way that it will be on for 500 ms followed by off for 500 ms. But, before state machines can run the program, we need to load the program into this instruction memory. “The function pio_add_program() finds free space for our program in a given PIO’s instruction memory, and loads it.” With this, we configure the state machine to output its data to the onboard LED.

The assembly code for .pio file shown below has all the C helper functions to set C/C++ code.

Apart from these, you also require CMake file that describes how .pio and .c files are built into a binary suitable for loading onto your Raspberry Pi Pico development board.

There’s no equivalent sample written with MicroPython, but we can see a simpler PIO MicroPython code used to blink the onboard LED:

There’s no separate .pio file in this case, and both MicroPython and assembly code are placed into the .py file.

Note that even though PIO can be programmed with MicroPython, the Python SDK documentation says it’s currently unstable/work-in-progress, so C/C++ is recommended.

There can be many modifications to the code by adding the color you want to display with the help of the hex format in RGB. However, there are many real-life examples like PWM, UART or even interfacing NeoPixels. For those interested, you can find many PIO programming examples in the GitHub repositories for C and MicroPython samples.

I see the fanboys from HaD made it over here. As usual, they had nothing useful to say.

Nice example(s).
For the C code, are you using the same cmake command as shown in the Pico Getting Started Guide?

Or are you doing the typical:

I could just build the PIO samples as follows:

Which part is terrible? I’m serious. It’s pretty much concise and clear.

Maybe they meant the programming language for the PIO module. Which, having programmed microcontrollers, DSPs, and VLIW units, looks horrible.

How would you improve it? I’m just trying to learn from others’ mistakes 🙂

I agree with Paulius on this one, it is ok to disagree or not like something but it would serve everyone to clearly state why and give an example of how you think it can be improved, everyone would benefit and learn!