Still based on a Silicon Labs EFM32 Wonder Gecko MCU, the HydroMoth is firmware-compatible with AudioMoth, enables audio recording at up to 60 meters deep, and has been tested to last two months at a depth of 30m using three AA batteries. 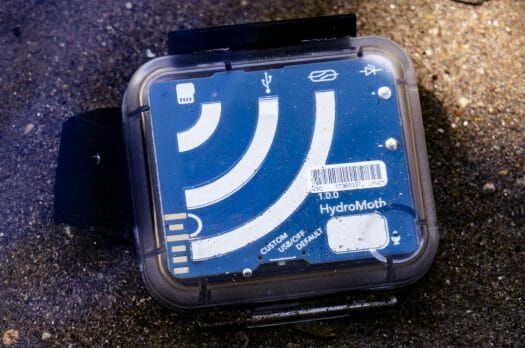 While HydroMoth is similar to AudioMoth, the company improved LED visibility, implemented more accurate time keeping for long deployments, and included a magnetic reed switch to start and stop recordings in wet conditions without having to open the case. The HydroMoth is sold with the AudioMoth Underwater Case.

“Why would I even want to record audio underwater?” you may ask. The HydroMoth can notably be used to monitor boat noise, for freshwater sound surveys, coral reef soundscape monitoring (see above), and cetacean underwater acoustic studies (i.e. whales, dolphins, etc…). You can learn how to use the device by reading the HydroMoth application note on Github, and a research paper explains how it may be possible to identify a fish in coral reefs based on its audio footprint and comparing the performance of the HydroMoth to a $3,000 specialized aquatic sound trap. Basically, Open Acoustic Devices solution works fine at lower frequencies, but the signal is less clear at higher frequencies (20 kHz and higher).

HydroMoth is currently sold for $135 on GroupGets with its waterproof enclosure. That’s a group buying campaign which should end on July 23, and so far 391 people have purchased the device with a 500+ goal.