Bluetrum, a Shenzhen-based fabless company focusing on audio chips, has designed the AB32VG1 board based on its AB5301A Bluetooth RISC-V MCU for general-purpose and audio applications.

The board comes with a MicroSD card, a USB port, a 3.5mm audio jack, and Arduino UNO compatible headers for easy prototyping. 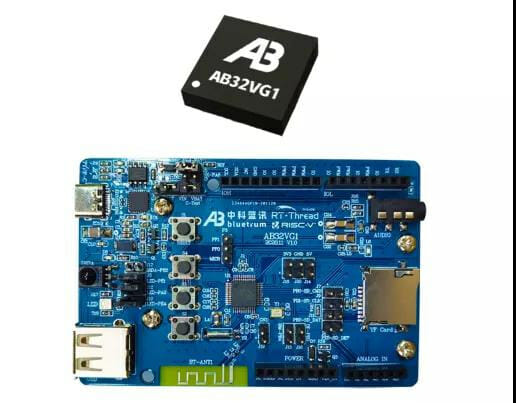 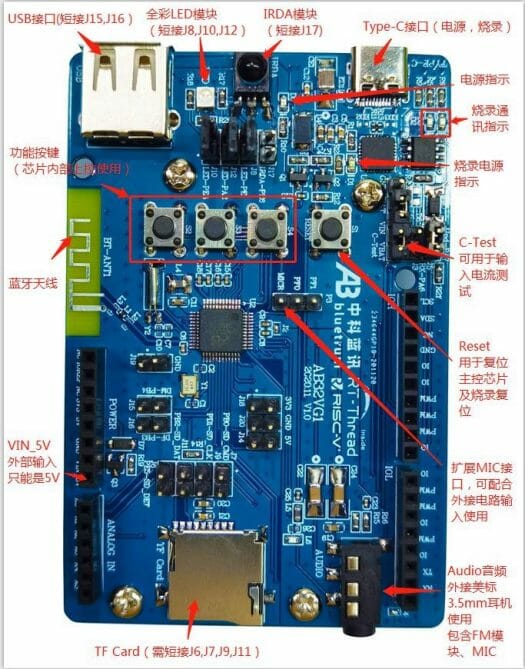 The specs are preliminary as it took some effort from my side and several emails exchanged to get the (hopefully) right specifications for the board. [Update: a datasheet and registers map have just been provided, both in English]. I also asked which RISC-V base and extensions the core relied on, and I was just told “BlueTrum created its own IP based on RISC-V instruction set”, but it should a 32-bit RISC-V core.

On the software side, the Bluetrum AB32VG1 board runs RT-Thread open-source IoT real-time operating system and can be programmed with the RT-Thread Studio IDE. A getting started guide in Chinese has been made available using a simple audio player with two WAV controlled by the user buttons.

AB32VG1 board will soon sell on Taobao, but pricing has not been made public yet. I could not find information about the RISC-V microcontroller and/or board on Bluetrum’s products page, but they may eventually be listed there.

I have one with me. Not impressed so far. The documentation is only in Chinese, and the IDE only available for Windows, so I have to use a VM. They are working on a Linux version. There’s a sample code for audio, but not Bluetooth.