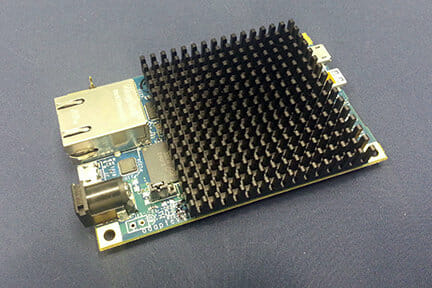 Adapteva’s Parallella low cost open source hardware “supercomputer” is a board powered by Xilinx Zynq-7010/7020 dual core Cortex A9 + FPGA SoC and the company’s Ephipany epiphany coprocessor, that’s had a successful Kickstarter campaign in 2012 as the 16-core version sold for just $99, and is capable of handling applications such as image and video processing, and ray-tracing, and also comes with an OpenCL SDK. The board was fairly difficult to source after the crowdfunding campaign, and one the common complain of backers was the board had to be actively cooled by a fan. The company has fixed both issues by increasing slightly the price, and redesigning the board so that it can be passively cooled by a larger heatsink. There are now three versions of the parallela board: Parallella Microserver ($119) – Used as an Ethernet connected headless server Parallella Desktop ($149) – Used as a  personal computer Parallella […] 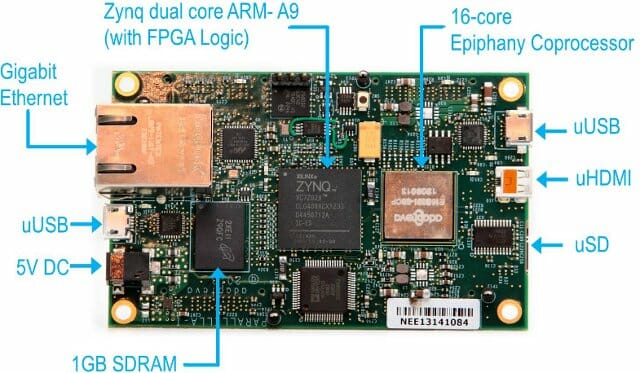 Parallella is a low cost supercomputer designed by Adapteva using Xilinx Zynq-7010/7020 FPGA+2x Cortex A9 SoC combined with Adapteva Ephipany 16 or 64 cores epiphany coprocessor. The project had a successful kickstarter campaign which allowed then to provide the 16-core version for $99, and the 64-core version for $750. The board will soon be shipped to people who pledged on kickstarter, and one of the promise of the campaign was to fully open source the platform, and today, they just fulfilled that. Before going into the details of the open source release, let’s have a look at the specs: SoC – Xilinx Zynq7000 Series (Z-7010 or Z-7020) Dual-Core ARM Cortex A9 with 512KB L2 Shared Cache Coprocessor – Epiphany Multicore Coprocessor. The Parallella-16 board includes the 16-core Epiphany-III processor The Parallella-64 board includes the 64-core Epiphany-IV processor System Memory – 1024MB DDR3L Boot Flash – 128 Mb QSPI Flash Indicators […]