Parallella is a low cost supercomputer designed by Adapteva using Xilinx Zynq-7010/7020 FPGA+2x Cortex A9 SoC combined with Adapteva Ephipany 16 or 64 cores epiphany coprocessor. The project had a successful kickstarter campaign which allowed then to provide the 16-core version for $99, and the 64-core version for $750. The board will soon be shipped to people who pledged on kickstarter, and one of the promise of the campaign was to fully open source the platform, and today, they just fulfilled that. 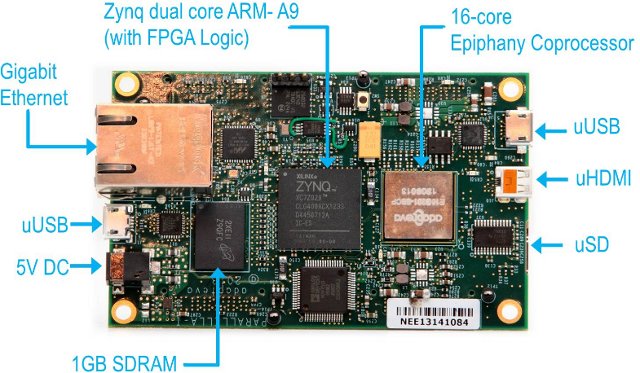 Before going into the details of the open source release, let’s have a look at the specs:

The 64-core version of the Parallella computer is said to deliver over 90 GFLOPS of performance, and have a processing equivalent to a 45 GHz CPU [64 CPU cores * 700MHz] providing you can run your application on the 64-core simultaneously on a tiny board consuming only 5 Watts under typical work loads. Imaging, communications, automotive, medical, and audio applications could take advantage of parallel computing at a much lower cost than is currently available with Parallella.

In order to make a platform really “open source hardware” you need to release the source code as well as the hardware file, and for the parallela platform everything seems now available on their github repository including:

We’ve got the hardware files, u-boot and linux for Zynq EPP, and the software running on Adapteva coprocessor. I haven’t checked the details but it looks like they fulfilled their promise. You can also access a preliminary version of Parallella Reference Manual.

You can also find more documentation on parallella.org. If you’ve missed the kickstarter campaign, and need a platform for parallel computing, the Parallela boards do not seem available right now, but you can register on their website to be informed once they are up for sale again.