Allwinner A10 and A20 processors have been quite popular in the past since they could handle Fast or Gigabit Ethernet and SATA natively, included decent multimedia capabilities, and were found in low-cost hardware such as Cubieboard 2 or MeLE A1000. Since then we’ve had a few boards with SATA using newer and faster processors without SATA IP, meaning it was usually implemented using a USB 2.0 to SATA bridge leading to mediocre to average performance depending on the implementation and selected bridge. Allwinner R40 is the successor of Allwinner R20 with a faster quad-core Cortex A7 processor, but keeping Gigabit Ethernet, SATA, and most features of its predecessor. The good news is that Banana Pi has now launched the promised M2 Ultra development board based on the new processor for $45.80 + shipping on Aliexpress (Total for me: $48.35). Banana Pi M2 Ultra specifications: SoC – Allwinner R40 quad-core ARM […]

Webduino Smart board reminds me of Witty ESP8266 board with its RGB LED and photocell sensor, but the design is a little different, and does not come with an extra USB to TTL board, as it’s designed to be programmed over the air using Blockly Editor. Webduino Smart specifications: WiFi Module – AI Thinker ESP-12F module with Espressif ESP8266 WiSoC Connectivity – WiFi 802.11 b/g/n 2x 8-pin headers with GPIOs,  ADC (Connected to Photocell), UART, VCC, 3.3V, GND, and Reset. USB – 1x micro USB port for power Misc – Photo resistor, RGB LED, micro switch button for firmware upgrade (connected to GPIO 4) Dimensions – 3 x 2.5 cm (See comparison to AA and AAA batteries below) While Witty board was mostly targeting mainland China market with all documentation in Chinese, Webduino Smart does have some documentation in English, and is made by Banana Pi team (SinoVoIP). The default […] 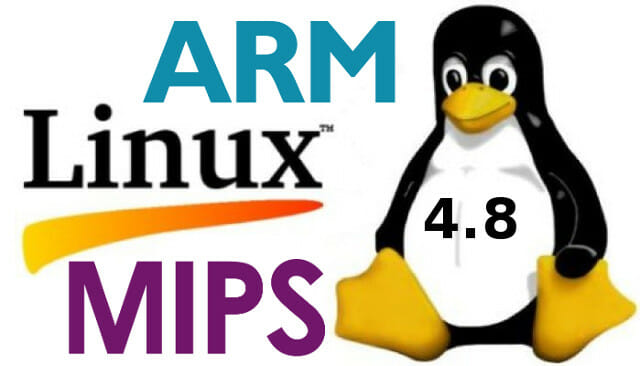 Linus Torvalds has officially released Linux 4.8 last Sunday: So the last week was really quiet, which maybe means that I could probably just have skipped rc8 after all. Oh well, no real harm done. This obviously means that the merge window for 4.9 is open, and I appreciate the people who already sent in some pull requests early due to upcoming travel or other reasons. I’ll start pulling things tomorrow, and have even the most eager developers and testers hopefully test the final 4.8 release before the next development kernels start coming 😉 Anyway, there’s a few stragging fixes since rc8 listed below: it’s a mixture of arch fixes (arm, mips, sparc, x86), drivers (networking, nvdimm, gpu) and generic code (some core networking, with a few filesystem, cgroup and and vm things). All of it pretty small, and there really aren’t that many of them. Go forth and test, […]

One of the most common complaints I get from readers when I publish news about new ARM processor is “Why didn’t they include SATA?”. So far Allwinner A20 is the only really low cost ARM processor that includes a SATA port, but it’s been released a few years, and its dual core Cortex A7 processor is getting old. We’ve been hearing rumors about an upgraded version for one or two years with Allwinner A40 or more recently Allwinner A20E, and finally the company has now published details about Allwinner R40 processor on their revamped website, which they claim to be the successor of Allwinner A20. Allwinner R40 key specifications: CPU – Quad-core ARM Cortex-A7 Processor GPU – Mali-400 MP2 GPU Memory I/F – 32-bit DDR3/DDR3L/LPDDR2/LPDDR3 Storage I/F – 8-bit NAND flash, SD3.0,  eMMC 5.0, and 1x SATA Networking – 2x MAC: 1x EMAC (10/100M Ethernet), 1x GMAC  (Gigabit Ethernet) Display […]

Windows IoT is a version of Windows 10 that’s optimized for smaller devices with or without a display, and was fist released for Raspberry Pi 2 and MinnowBoard MAX. Since then a few more boards are now officially supported, including DragonBoard 410c, and Raspberry Pi 3. But there’s been some recent developments as two Allwinner A64 64-bit ARM boards are now supported according to two wiki entries (here and there) explaining how to run a simple Csharp sample on Windows 10 IoT Core on either Banana Pi M64 or Pine A64 boards. The guide shows how to configure Azure IoT Hub, register the IoT device, and build and deploy Azure IoT SDK on the board. But basically if all you want to is to run Windows IoT core on either board, you’ll need to download either: Windows 10 IoT Core for Banana Pi M64: Windows10IoT_BPI-M64.ffu (Link removed as Microsoft does […] 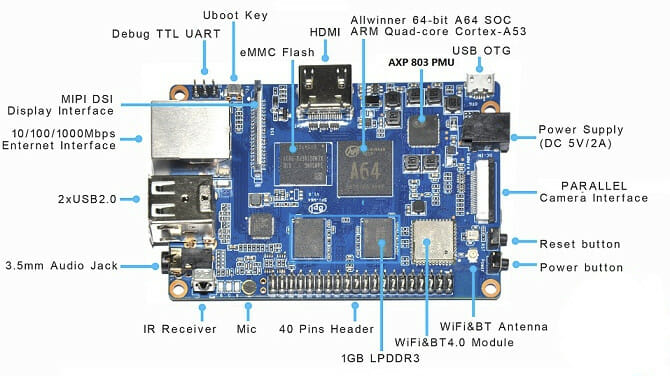 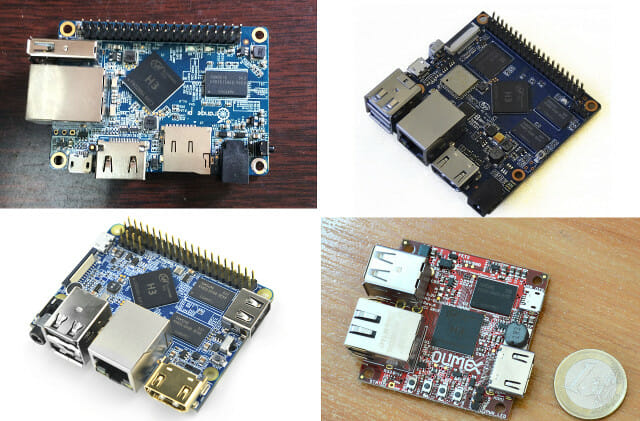 Allwinner H3 SoC has now found its way into many low cost development boards, including several Orange Pi Boards, Banana Pi M2+, NanoPi M1, and Olimex H3-OlinuXino-NANO, and it might be difficult to choose among the list of boards available, so tkaiser has written a buyer’s guide for boards supported by Armbian, with some of the key differentiating factors, and on my side, I thought it might be a good idea to draw a comparison table between the boards. Since a table with 10 boards would be hard to read, I made two tables: one with boards with 512 MB RAM + Orange Pi PC / PC Plus, and a second table with higher end boards with 1 to 2 GB RAM, and more features. But first let’s talk about Allwinner H3 SoC since it’s common to all boards. It’s a quad core Cortex A7 processor clocked at up to […] 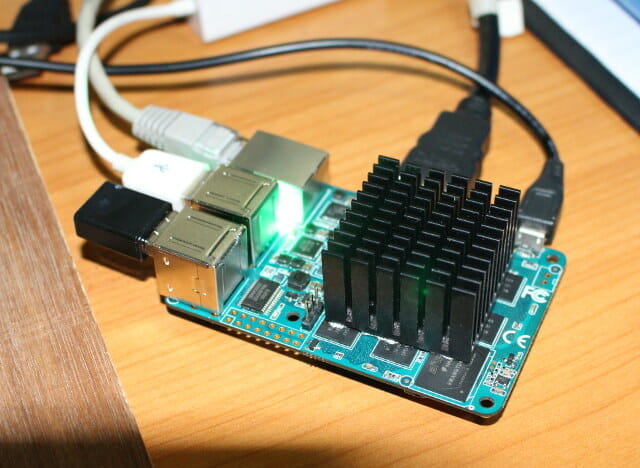 MiQi is an upcoming low cost development board powered by Rockchip RK3288 SoC that will sell for $35 with 1GB RAM and 8GB storage, and $69 for the version with a  2GB / 32GB combination. Since Rockchip RK3288 was launched in 2014, most available benchmarks were made on Android 4.4, and since MiQi is the first low cost board based on the processor, other RK3288 based board such as FireFly have not been that popular. So I’ve decided to run updated benchmarks in MiQi both in Android 5.1 and Linux (Lubuntu 14.04), which was easy since a dual boot image is pre-installed. But since I received an early sample without heatsink, I found a spare heatsink added some thermal paste and placed it on top of the processor and partially on RAM and eMMC flash. MiQi Board Android 5.1 Benchmarks I ran Antutu both using 1080p60 and 2160p30 video output, […]