$19.50 BPI:bit ESP32 Board is Inspired by BBC Micro:bit, Compatible with Webduino and Arduino IDE
Skip to content

BBC micro:bit board for education was first unveiled in 2015, before starting to be given away to UK students, and later sold for about $19 in 2016. The board supports Bluetooth connectivity, includes an array of 25 LEDs, as well as a specific 20-pin edge connector also featuring 5 large holes (rings) for 3 I/Os and power.

So far I had not seen any clones or alternative boards inspired from the design, as we see for Arduino or Raspberry Pi boards. But SinoVoIP (Banana Pi) has changed that with their BPI:bit clearly inspired from the Micro:bit, but offering both WiFi and Bluetooth connectivity via an ESP32 module. 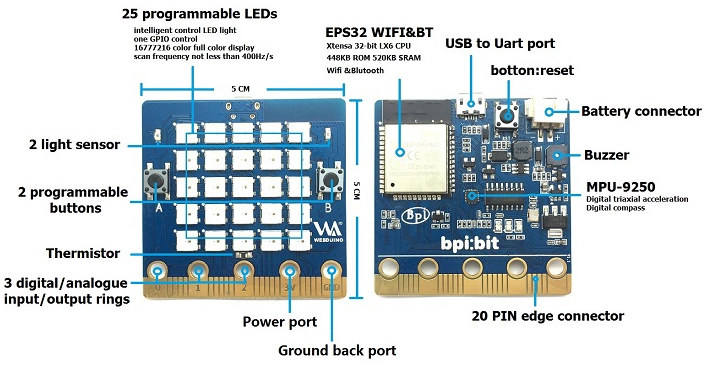 SinoVoIP also targets the educational market (STEAM), but based on their previous error-prone documentation for Banana Pi boards (case in point with dimensions above), it might prove to be a challenge, unless a large enough community forms around the platform. They do appear to focus on the Chinese market first (mainline China + Taiwan), so maybe the Chinese version of their document is usually better.

The board supports Webduino (Blocky) to develop programs in a web browser using a visual editor, as well as the Arduino IDE or PlatformIO (See short demo below).


More information can be found in Github with document in English and/or Chinese.

BPI:bit board can be purchased on Aliexpress for $19.50 plus shipping. The latter appears to vary a lot depending on the destination country, as in my case the cheapest option is $19.08 via EMS (total: $38.58), but Time4EE reports shipping is only $7 for him.