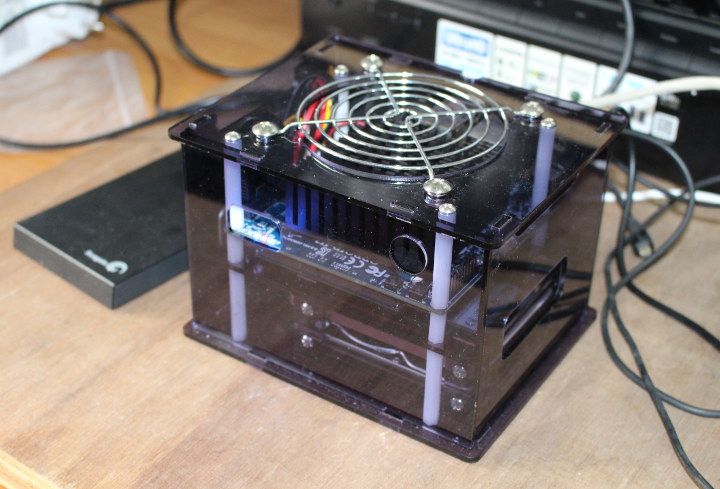 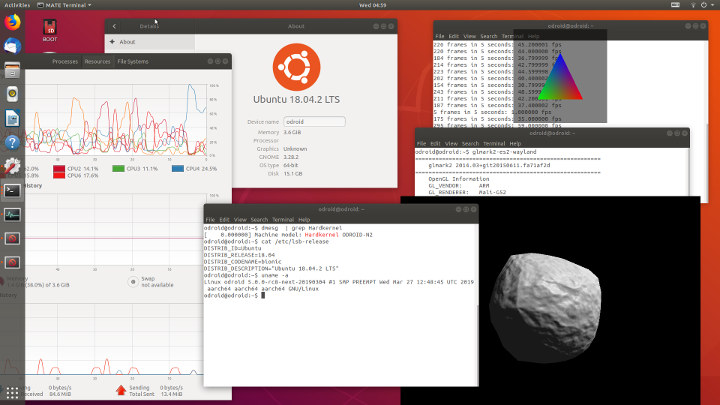 ODROID-N2 was announced last February for $63 (2GB RAM), and $79 (4GB RAM), but Hardkernel was not quite ready to take orders at the time. One of the good news is that the 4GB RAM is now available for pre-order with shipping scheduled to start on April 3. Another good news is on the software side with Hardkernel having released the userland Mali-G52 Wayland driver. It does not work well with Linux 4.9 due to incomplete DRM implementation, but it goes work with Linux 5.0 plus some modifications as further discussed in the aforelinked forum thread. The screenshot above, courtesy of odroid forum member memeka , shows ODROID-N2 running Ubuntu 18.04 + Gnome3 + Linux 5.0 on top of Wayland with GPU drivers providing acceleration as shown by glmark2-es2-wayland test program. The benchmark results are pretty impressive: I’ve never seen such as high score (1,119 points) on Arm hardware. But at the same time, I’ve never run the wayland version […] 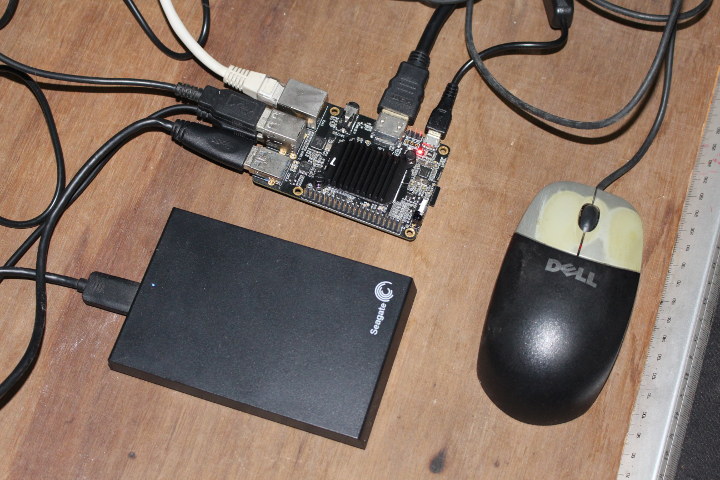 Firefly team from T-chip company has send me some of their Rockchip development boards, and we’ve already checked the provided boards and accessories, so today I’ll report my experience with one of the board: ROC-RK3328-CC also known as Renegade. I won’t test it with Android, since I have already reviewed RK3328 Android TV boxes such as Zidoo X7, and I’ve been told the team is hard at work with Android 8.1 SDK, so an Oreo image should be released in a few weeks/months. So I had initially planned to report my experience with one of the Linux images,  then show how to install mainline Linux (currently 4.17) to the board, and reports what works. However, I encountered many issues, although likely not directly related to the board or its software support, so instead I’ll write about my experience getting started with the board, and list all the issues I had so that people can avoid those – or at least […] 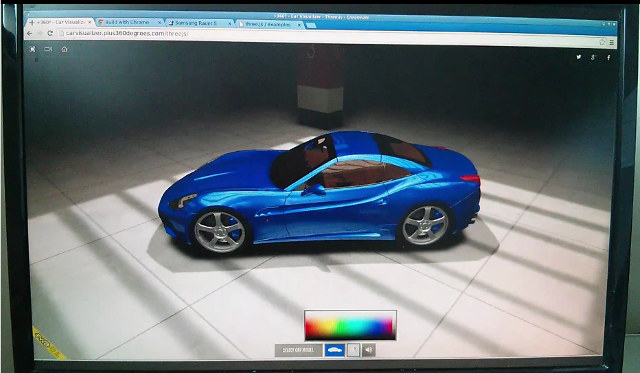 Several devices and development boards based on Rockchip RK3288 processor already support Linux, usually with images based on Ubuntu, including Ugoos UM3 / UT3, Open Hour Chameleon, and Firefly-RK3288 among others. What these images lack however, is support for 2D and 3D graphics acceleration with the GPU, and hardware video decoding/encoding with the VPU. But Jas-hacks has made some progress with 3D graphics support. He has managed to add GPU acceleration via EGL/OpenGL ES bringing 3D acceleration to the platform, but 2D support is not there yet, meaning X11 still heavily relies on software rendering. But the implementation is still good enough to run the usual es2gears and glmark2-es2 benchmarks. as well as some WebGL demos in Chromium. Performance is currently underwhelming, with 50 points in glmark-es2, even a bit lower than the score (54 points) I got with ODROID-X board powered by Exynos 4412 SoC with a Mali-400MP4 GPU, and running Unity desktop in Ubuntu Linaro 12.11. The desktop […] 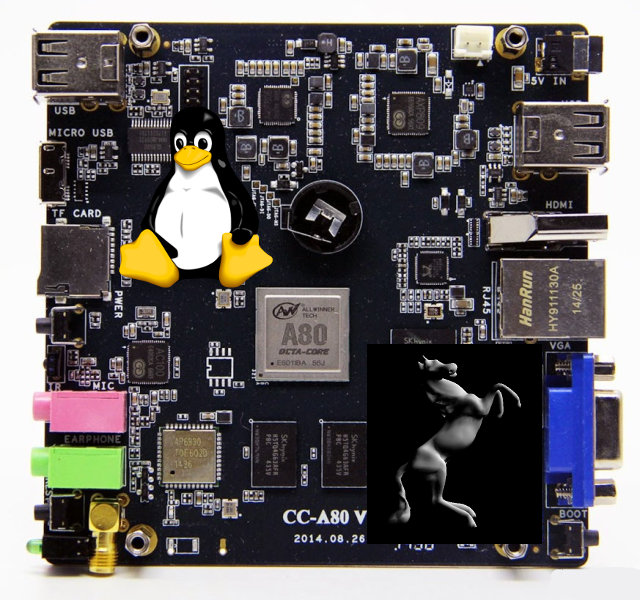 Allwinner A80 is a powerful octa-core processor found in development boards and TV boxes such as Cubieboard4 or Tronsmart Draco AW80. Some early Ubuntu images and instructions had already been released for A80 Optimusboard and Draco AW80, but none of these featured GPU drivers for 3D acceleration, which to be honest, has limited advantages in Linux desktop distributions since desktop environments and most apps require full OpenGL support, i.e. not only OpenGL ES, and the only ARM SoC that can provide OpenGL support without external graphics card is Nvidia Tegra K1 SoC. Having said that GPU drivers would pave the way for smooth OpenELEC / Kodi user interface support in Allwinner A80 Linux distributions. That’s only one part of the puzzle, since the GPU normally handles the user interface, while the VPU takes care of video decoding. The good news is that CubieTech release updates images for their Cubieboard4 (CC-A80) development with PowerVR GC6200 GPU support, which you can download […] 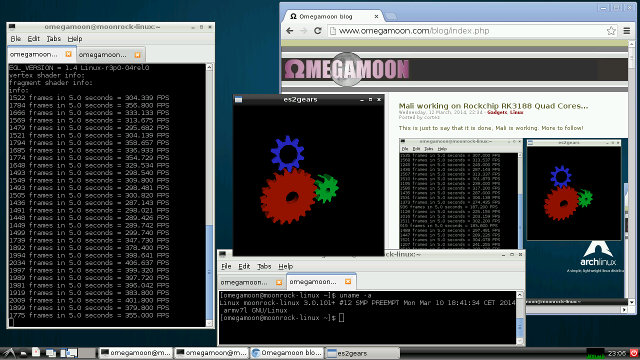 Accelerated 3D graphics in Linux with Mali-400 via OpenGL ES has been possible for nearly a year on RK3066 devices,  but there was no such support for RK3188. This week however, both Naoki FUKAUMI and omegamoon have reported OpenGL ES to work in in their respective RK3188 devices. I don’t know which device omegamoon used, but Naoki did so in Radxa Rock, and even posted instructions to build it yourself. They’ve mostly followed the work done by olegk0 for Rockchip, and Mali drivers build instructions provided in linux-sunxi community, and it can be summarize in 3 main steps: Cross-compile drm.ko, mali_drm.ko, ump.ko, mali.ko in a Linux machine Copy and load the four modules to your RK3188 based board or device. Install dependencies and binary Mali drivers from sunxi-linux in your Rockchip device Once this is done you can try some OpenGL ES demos such as esgears2 or glmark2-es to test it with the framebuffer. es2gears can be installed with “sudo […] 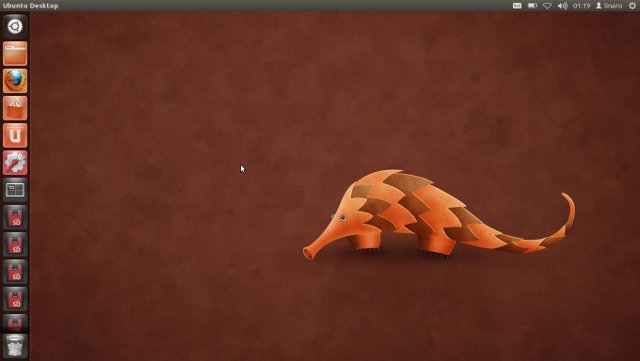 A few days ago, Hardkernel released the first version of Ubuntu 12.11 (Linaro) with Mali-400 GPU support for their ODROID boards (ODROID-X/X2, ODROID-U/U2). This is still WIP (Work in Progress), but this is one of the few boards together with Pandaboard, Origen and Snowball that can support 2D/3D GPU acceleration in Ubuntu Quantal. Since I have an ODROID-X development board, I decided to give it a try. There are different ways to install it. I chose the way that is most convenient for me (LCD display instead of HDMI), and likely to yield more performance (eMMC instead of SD Card). The current installation instructions to eMMC are extremely cumbersome and you have to go through 5 main steps: Install Android (yes, seriously) in the eMMC Install Ubuntu in the SD Card Install Ubuntu to the eMMC Upgrade Ubuntu to the latest version Install the Mali drivers In this post I’m going to go through all those steps, and do some […]

Xlab (Maxim Kouprianov) has tested 2D & 3D capabilities of AllWinner A10 SoC (with Mali-400 GPU) on a Ployer MOMO11 Bird Edition tablet running OpenEmbedded with kernel 3.0.52+ testing X11, EGL, OpenGL ES2 and Qt4 on the platform, and the results are pretty smooth as you can see in the video below, although there appears to be some flickering in LunaSysMgr demo. The tools used in the demos are xfwm4 (Xfce Windows Manager), es2gears_x11, cube (Qt), LunaSysMgr (Qt/WebOS) and glmark2-es2. Qt4 acceleration is done via XlibGL platform which in turns uses X11-EGL. He used the Mali drivers version r3p0 (mali400-gles20-gles11-linux-x11-ump) and xf86-video-mali on sunxi-linux github repository mainly maintained by rz2k. You can get more details on how to build Mali-400 support for AllWinner A10 on http://linux-sunxi.org/Mali400, and GPU benchmark results for A10 show the drivers seem to work as expected. Jean-Luc Aufranc (CNXSoft)Jean-Luc started CNX Software in 2010 as a part-time endeavor, before quitting his job as a software engineering manager, […]