[Edit: Hardkernel has now updated their documentation to clarify the NAS uses ASM1061 PCIe to SATA controller instead of JMB582] It’s hard to find low-cost NAS platforms often because of the mechanism to insert drives and the enclosure add to the cost. An alternative is to use boards like Hardkernel ODROID-HC1 for 2.5-inch drives or ODROID-HC2 for 2.5- and 3.5-inch drives, but each board supports only one drive. The designs are stackable, but you’d need one Linux board per drive, so it’s not ideal. The Korean company has now launched a new model with ODROID-HC4 powered by an Amlogic S905X3 processor and shipping with a case supporting two 2.5-inch or 3.5-inch SATA drives that will start selling later this month for just $65 and up. ODROID-HC4 specifications: SoC – Amlogic S905X3 quad-core Cortex-A55 processor @ 1.8 GHz with Mali-G31 MP2 GPU System Memory – 4GB DDR4 Storage 128 Mbit SPI flash for bootloader like Petitboot UHS-1 compatible MicroSD card slot […]

Last month I received Beelink GS-King X for review and started with an unboxing and teardown to check out the hardware. I’ve now had time to test the device with Android 9 including the file server function, a key selling point since of the device since it supports up to two 3.5″ SATA drives internally. A Tedious and Frustrating Start Eventually, I managed to boot the TV box and access the launcher, but it was no pleasure cruise. The first time, I connected the power, there was nothing at all, with the LED turned off, and no noise from the device. I thought the device was dead. The company asked me to check the power supply, and indeed a quick check with a multimeter confirmed it was dead despite the blue LED (on the power supply) implying the contrary. Nevermind, bad things happen, and the company sent me a new power supply, and the TV box could start… But… Oh […]

Beelink GS-King X is a 3-in-1 media center that works as an Android 9.0 TV box, a NAS with support for two 3.5″ hard drives, and a HiFi audio system with two ESS9018 audio DACs powering RCA and balanced audio outputs. The company sent a review sample, and I’ll start by checking out the hardware and accessories, show how to install the hard drive(s), and attempt to tear down the device to check what it’s really made of. Beelink GS-King X Unboxing There’s no mention of TV box nor Android on the package, just “STORAGE” and DTS plus Dolby Audio… The bottom of the package lists the Beelink GS-King X specifications which we already discussed in our previous articles. There’s a red ribbon that helps to take the device out of its package. I wish more companies would do this. Accessories include the voice remote control, an HDMI cable, a 19V/3A power supply, HDD brackets with screws, as well as […]

So far, iXsystems managed two FreeBSD based operating systems for network access storage (NAS): devices: FreeNAS an open-source version supported by the community, and TrueNAS with more enterprise-grade features and commercial support working on the company’s hardware of the same name (TrueNAS flash-powered arrays). Even though lots of the code was shared, the company found out that maintaining both projects separately negatively affected the development efficiency and quality of the software since they had to maintain two build processes, two QA processes, and two sets of documentation. The situation is illustrated in the diagram above, but the company has decided to work on improving the development process, and FreeNAS and TrueNAS will share the same build, QA processor, documentation and even release starting with TrueNAS 12. That means there will be a single binary with two versions: TrueNAS CORE previously known as FreeNAS, without the need for license keys, and the source code open source and free to use. TrueNAS […] 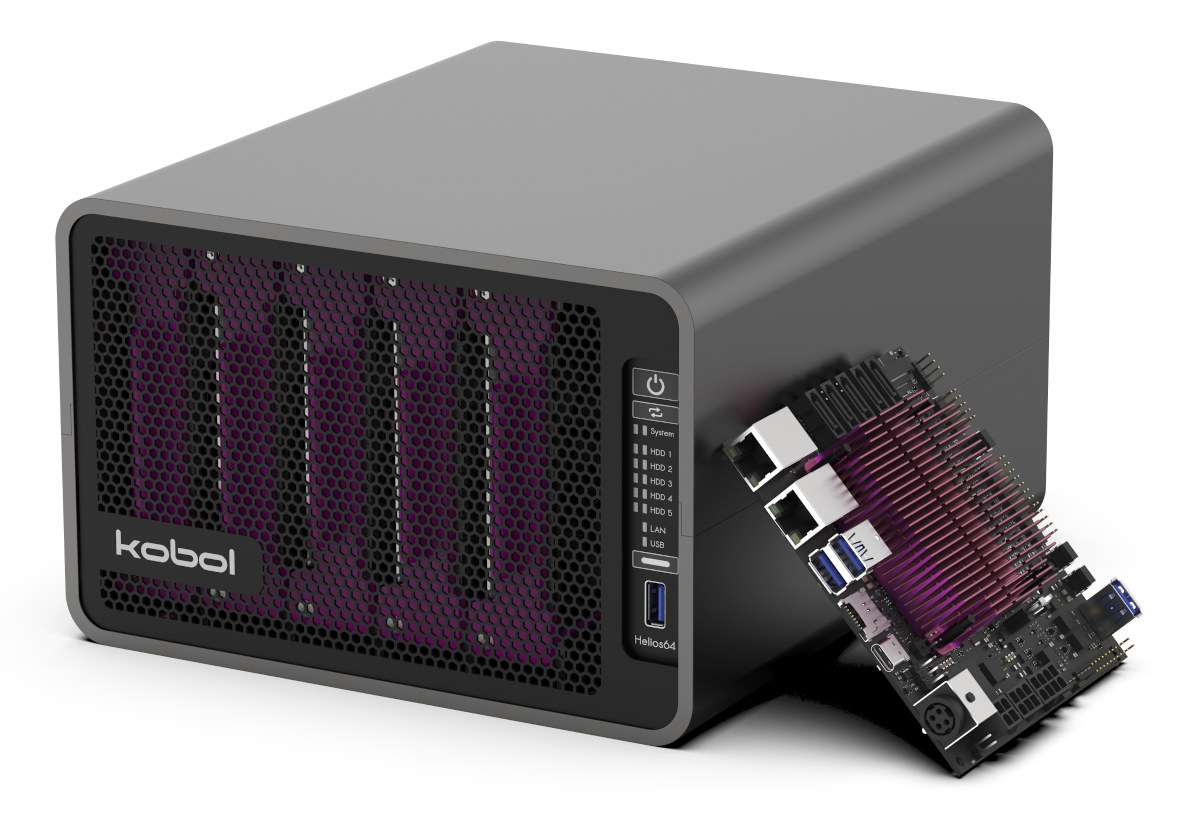 We covered Rockchip RK3399K processor a few months ago, as a version of RK3399 processor qualified to run at 2.0 GHz, or supporting a wider-temperature range (-20 to +85°C) at 1.8 GHz. We found out about the new processor, as Kobol was working on a Helios64 SBC designed for NAS that featured RK3399K SoC. At the time, we just had a drawing of the board and some specifications, but now the company has announced pre-orders for the board and a complete 5-bay NAS kit will start next week and the actual shipping start in March. Kobol Helios64 SBC Specifications: SoC – Rockchip RK3399K hexa-core processor with 2x Arm Cortex-A72 cores @ 2.0 GHz, 4x Cortex-A53 cores @ 1.6 GHz System Memory – 4GB LPDDR4 Storage – 16GB eMMC 5.1 flash, 5x SATA 3.0, 1x M.2 SATA slot shared with one SATA 3.0 port, MicroSD port Connectivity – 1x 2.5GbE port, 1x Gigabit Ethernet port USB – 3x USB 3.0 ports, […]