Linaro 14.07 has just been released with Linux Kernel 3.16-rc6 (baseline), Linux Kernel 3.10.50 (LSK), and Android 4.4.4. This month, Linaro has continued development on Juno 64-bit ARM development board, as well as other member boards from Broadcom (Capri), Qualcomm (IFC6410), Hisilicon D01, Samsung (Arndale / Arndale Octa), etc.. Android have been upgraded to version 4.4.4 with images released for Pandaboard, Arndale, Nexus 10, and Nexus 7, built with Linaro GCC 4.9. Here are the highlights of this release: Linux Linaro 3.16-rc6-2014.07 released GATOR version 5.18 (same version as in 2014.04) updated basic Capri board support from Broadcom LT. Good progress in upstreaming the code: now the topic has 21 patch on top of v3.16-rc4 vs 53 patches on top of v3.15 in 2014.06 cycle removed cortex-strings-arm64 topic as the code is accepted into the mainline new topic from Qualcomm LT to add IFC6410 board support updated Versatile Express ARM64 […]

Linaro 13.07 has been released with Linux Kernel 3.10.1 (both baseline and stable versions), and Android 4.2.2. It’s summer time, so activity seems to have slowdown a bit, yet improvements have done to LAVA with the first LAVA Multi-purpose Prove (LMP) setup, and Linaro has released build with Linux 3.10.1, Ubuntu Raring, OpenEmbedded (ARMv8), and Android. For the very first time, there’s even an Android 4.2.2 community build for HiSilicon K3V2 hardware (HiSilicon Hi4511 development platform). Here are the highlights of this release: LAVA LAVA Core VExpress A9 test images no longer use the master image’s boot loader Support added for interactive bootloader commands. Support for OpenID / Crowd added for LAVA. LAVA Master images updated on images.validation.linaro.org LAVA Multi-node – Multi-Node support has an initial implementation which can support communication between nodes under test via the use of a GroupDispatcher. LAVA Lab Capabilities – LMP (LAVA Multi-purpose Probe) prototypes […]

Linaro 13.06 has been released with Linux Kernel 3.10-rc6 and Android 4.2.2. Linux Linaro Stable (LSK) preview is based on kernel 3.9.6. There seems to have been a lot of activity for the LAVA and Builds and Integration teams, with LAVA support for new SoC such as Huawei K3V2 and Broadcom Capri from 2 companies which have recently joined Linaro as members, and well as continuous build for Linaro Stable Kernel. On the kernel side, more work has been done for multi-platform support (unified kernel), uprobes, eMMC power mamangement, and more. Here are the highlights of this release: LAVA LAVA Core As part of the effort to improve the developer experience with LAVA, the different client tools were consolidated into a single package, which simplifies the process of updating the tools and makes it easier for the team to provide new features for LAVA users. LAVA now supports KVM devices, […]

Linaro 13.04 has just been released. It features Linux Kernel 3.9-rc7 and Android 4.2.2. A lot of work has been done on ARMv8 (Cortex A53) with further work on OpenEmbedded, more testing, and updates to the GCC toolchain. Calxeda EnergyCore server has been added to LAVA, Origen Quad now gets hardware video acceleration in Android Jelly Bean. Still more cleanup has been done on the kernel side with regards to Samsung and ST SoC, and a big.LITTLE porting guide is now available (linaro login required). Here are the highlights of this release: LAVA Prototype of a new publishing system is used to overcome performance problems with android-build.linaro.org. Calxeda EnergyCore support is merged in LAVA, and an isolated system has been set up for web benchmarking. Fedora support is merged in LAVA. A user can submit LAVA jobs using a Fedora pre-built image. Boot commands are untangled from LAVA dispatcher. They’re now […]

Chris Simmonds, freelance consultant and trainer (2net ltd), discusses the future of embedded Linux now that storage and processing power are no longer an major issue, and try to find the best Linux platform for embedded systems at ELCE 2012. Abstract: Embedded Linux is at a cross roads where the combination of Moore’s law making devices more powerful and the mass production of consumer devices, especially mobile, making them cheaper means that the old ways no longer work. Only a few years ago we though in mega: MHz, MBytes, MBits/s. Now we have to think in giga. The days of the single core CPU are almost over, as are the days of the QVGA display. All this means that there is a need to re-think how embedded devices are programmed. Two obvious roads lie ahead: Android and Ubuntu (or other desktop operating system of your choice). This talk considers the […] 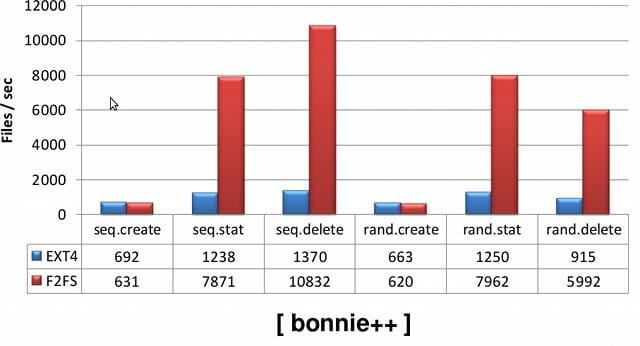 Joo-Young Hwang, principal engineer at Samsung, presents F2FS (Flash-Friendly File System), a new file system designed for storage in mobile devices at the Embedded Linux Conference in Barcelona, Spain, on November 5, 2012. Abstract: Recent mobile devices adopt various flash storages as a primary storage. File system support for those flash storages is a must for flash device performance and lifespan. I will present a new file system, called F2FS, designed for mobile flash storages. F2FS is designed considering the characteristics of the underlying flash storage which has flash translation layer (FTL). F2FS outperforms EXT4, which is a popular file system for Android phones, in most of benchmarks. I will describe motivation, design, and implementation of the file system, then show performance comparison data with EXT4. Target audiences are those who are interested in file system support for flash storages such as eMMC and SSD. Kernel and file system expertise […]